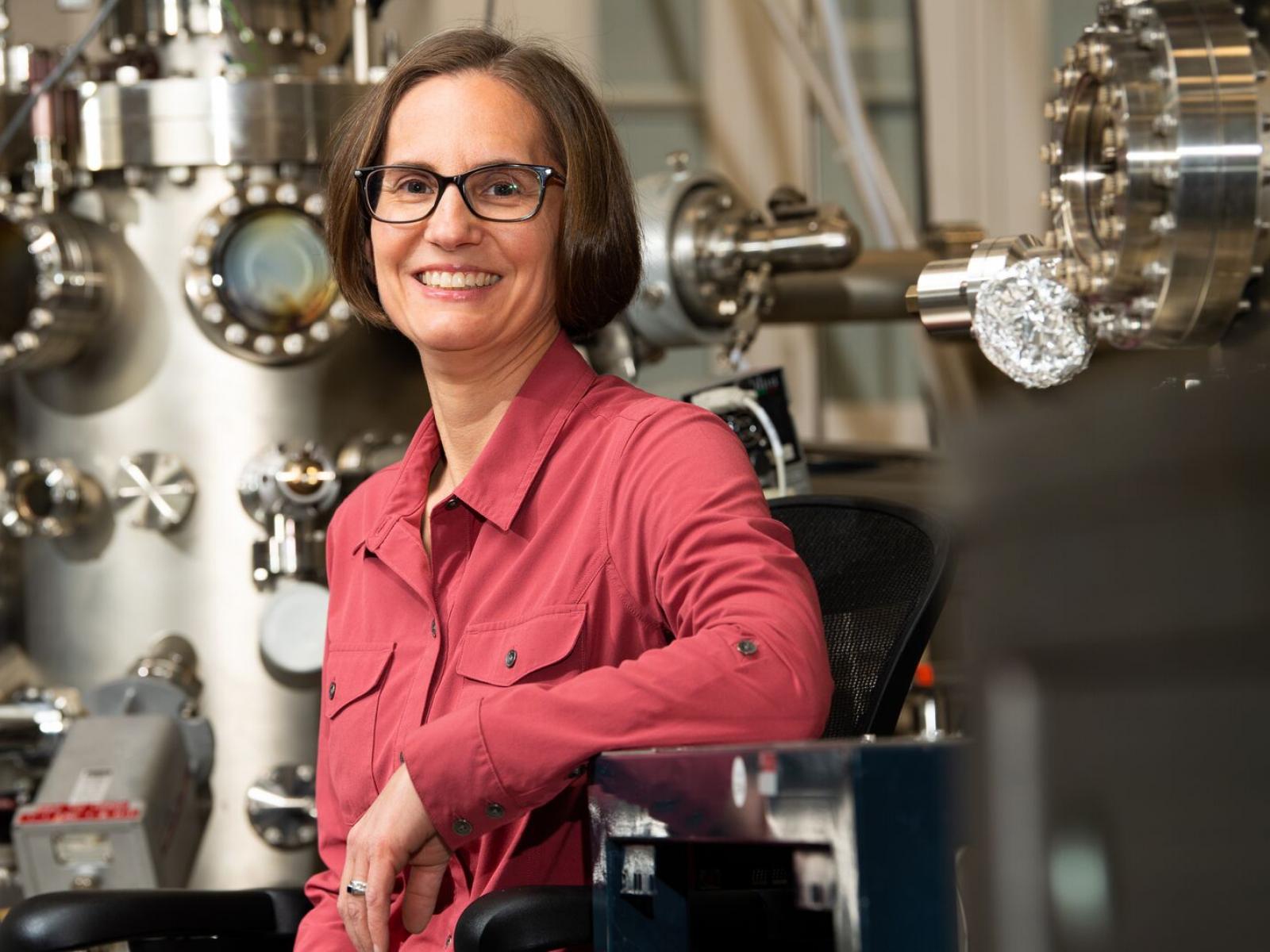 PNNL materials scientist Tiffany Kaspar uses a molecular beam epitaxy system to develop and explore ultra-thin films that could have far-reaching effects on a variety of applications.

“The instrument,” as it’s called, seems to take up the entire room. The sprawling molecular beam epitaxy (MBE) system is all tubes, bolts, stainless steel components, and air-tight glass. It can create an ultrahigh-vacuum environment, a space nearly devoid of matter, a space similar to that outside the International Space Station.

The main chamber is about the size of a wine barrel and looks as durable as a tank. Tiffany Kaspar, however, makes sure it’s treated with the care befitting an instrument capable of producing high-quality thin films with atomic precision. Knee-high plexiglass surrounds some tubes near the laboratory floor, a precautionary shield created by a colleague. Kaspar values the low-tech device to protect against clumsy feet, especially her own.

Kaspar, a Pacific Northwest National Laboratory (PNNL) materials scientist, was inspecting the MBE instrument one day this spring. Weeks earlier, she and her colleagues had overseen the careful transport of the MBE from a nearby building on PNNL’s Richland campus to its home in the new Energy Sciences Center (ESC).

The instrument is the center of Kaspar’s research universe. Each week she grows perfect crystalline films, a few atoms to a few hundred atoms thick, on a centimeter-wide surface, creating new materials. Kaspar’s work has advanced the discovery and understanding of oxide materials. The thin-film oxide heterostructures have been essential to developments in electronics, quantum computing, and energy production.

“We call it use-inspired research,” said Kaspar. “What we're studying may be very fundamental—the properties of atomically precise films of new materials. But we always have some sort of application in mind as to how these materials could be useful in society.”

From her start on the Richland campus more than 20 years ago, Kaspar has been driven to produce useful science. She’s not necessarily trumpeting the wonders of pulsed laser deposition of epitaxial metallic and metal oxide thin films—her area of expertise (although she does that too). She’s targeting a bigger tent, usually filled with younger faces. It’s the kind of audience that will appreciate seeing a marshmallow puffed large then deflated through the magic of a desktop vacuum chamber. Just maybe, she thinks, her efforts will have as much impact on a young student as she experienced early in life.

Setting the course in middle school

Kaspar was born not far from the PNNL campus. Her parents were living in Kennewick at the time as her father, a civil engineer, participated in the construction of the cable bridge connecting Pasco and Kennewick. When she was 2, the family moved to Olympia. By her middle school years, they had settled in Arvada, a Denver suburb.

A middle school pond water experiment sparked her interest. “We were able to figure out what was in this jar of stuff that the teacher handed us,” Kaspar said. “We used the skills we had learned over the year to determine the contents. Heating the liquid showed us that first ethanol evaporated off, then water. Salts were left behind. I thought it was fascinating that we could use science to deconstruct a complex mixture into its simple components.”

By junior year of high school, it was a four-way tie for her academic interests: chemistry, physics, English, and history. A teacher with a PhD in chemistry resolved the dilemma by sparking her love of chemistry. “He could’ve taught in college,” Kaspar said, “but found teaching high school students to be rewarding.”

Kaspar earned an undergraduate degree in chemical engineering at the University of Colorado Boulder. While she had a passion for chemistry, she said the engineering major also reflected her concern for job certainty. A couple of years spent assisting graduate students in a laboratory gave her an idea of what it takes to earn a doctoral degree as well as the degree’s career potential. She earned the PhD, also in chemical engineering, at the University of Washington (UW) in Seattle.

“That helped put PNNL on the map for my future career search,” Kaspar said. “Up to that point, I didn’t realize national laboratories existed.”

She started at the Richland lab as a graduate student intern in 2000. After graduation, she remained as a postdoctoral researcher and was hired as a full-time PNNL staff scientist in 2007.

Growing thin films, one at a time

To create a film, Kaspar and colleagues evaporate atoms of metals like iron, titanium, and chromium using immense heat—as high as 1800 degrees Celsius or about 3200 degrees Fahrenheit—near the bottom of the ultraclean MBE chamber. A substrate near the top of the chamber collects the evaporating atoms, creating a crystalline structure that may be no thicker than an atom. One of the most common uses of thin films, made at larger scale, is for computer chip circuitry.

Kaspar “is very patient and systematic in summarizing data,” said Yingge Du, a senior staff scientist in the Materials Group of the Physical and Computational Sciences Directorate. “She pays attention to the details.”

Kaspar has authored or contributed to more than 80 peer-reviewed studies of thin-film creation and characterization.

In a Nano Letters study published in June, Kaspar, the co-lead author, explored the atomic-scale reactions that occur during the deposition of oxide thin films by MBE.

“It can be difficult to measure oxygen diffusion in an oxide because atomically, all oxygen looks the same, whether it has diffused through the oxide crystal lattice or remained stationary,” Kaspar said. “In this study, we achieved greater understanding of the movement of oxygen by experiment with two types of oxygen, each chemically identical but each with different atomic weights.”

“The findings in the study are significant because in order to understand how to grow atomically precise materials, we must understand where and how atoms end up on a predetermined place on a substrate,” said Kaspar. “This will help us control and understand atom deposition.”

Schreiber has worked with Kaspar since he arrived at the lab in 2011. “She is very methodical in her approach to a problem,” he said. “She approaches it with a very explicit research plan.”

Those characteristics contributed to the DOE selecting her as an official “detailee,” meaning that she provides expert scientific and technical advice to ensure effective management of the Synthesis and Processing Science Program within DOE’s Basic Energy Sciences portfolio.

She also brings her knack for explanation to audiences beyond DOE, with the help of marshmallows.

On a late April day, Kaspar stood behind a display table in the lobby outside her ESC laboratory. The ESC, the $90 million center focused on scientific discovery in chemistry, materials science, and computing, had opened weeks before. On this day, Kaspar was poised in the lobby to help with the groundbreaking festivities for the nearby $75 million Grid Storage Launchpad.

She presented a physics magic trick of sorts that she’d presented many times before. It’s a repeat crowd favorite. Youngsters passing through at PNNL’s Take Our Kids to Work Day have seen it. So have Congressional staff members. Marshmallows are involved. More importantly, so are the basics of an airless chamber.

Kaspar places two marshmallows in a desktop, portable vacuum chamber. She flips a switch to remove air from the chamber. The marshmallows then put on a show. They grow from their modest shape to nearly fill the circumference of the chamber as their internal air pockets expand. These giant marshmallows can’t be enjoyed, though, because the air pressure in the surrounding room is so strong that it’s impossible to remove the clear dome of the airless vacuum chamber. Introducing air back into the chamber, the marshmallows collapse into a shrunken, shriveled shape because their internal air pockets have popped and collapsed.

Contributing to STEM at PNNL

Soon after her arrival at PNNL, Kaspar looked for opportunities to work with area students. When PNNL introduced its STEM Ambassadors program, “Tiffany was one of the first persons to raise their hand and say, ‘I want to be part of that,’” said Karen Kniep Blanton, PNNL senior STEM education consultant.

“Tiffany is incredibly dedicated and skilled in sharing her science and work at the lab in engaging and easily understandable ways,” said Blanton. “She is able to adapt what she shares, depending on who is in front of her. So, she’s a hit at Kids Day and her messages equally resonate with sponsors, stakeholders, and other visitors to the lab.”

In 2020, Kaspar was awarded the PNNL Laboratory Director’s Award for Outstanding Contributions to STEM Education: Community Engagement & Outreach. Nomination letters pointed to her track record of science education, including the founding of a Tri-Cities based nonprofit to promote science engagement and outreach in the community as well as staging an annual “Celebration of Science” on Earth Day in 2017, 2018, and 2019 in John Dam Plaza in Richland.

“I have had the opportunity to work with several scientists and professors,” wrote Shutthanandan, “but I can honestly say that none have exhibited such enthusiasm, devotion, and confidence as Tiffany.”

The award was an honor, Kaspar said, but her participation is “just a part of a larger community effort to introduce the wonder, excitement, and usefulness of science to a broad audience.

“I feel strongly that achieving a large and diverse scientific workforce requires effort all along the talent pipeline, starting with sparking kids’ interest in science from a young age,” she said. “And science won’t thrive in the U.S. unless everyone in the community, regardless of their technical expertise, understands that scientific endeavors underpin almost everything in our daily lives and will enable future U.S. innovation.”