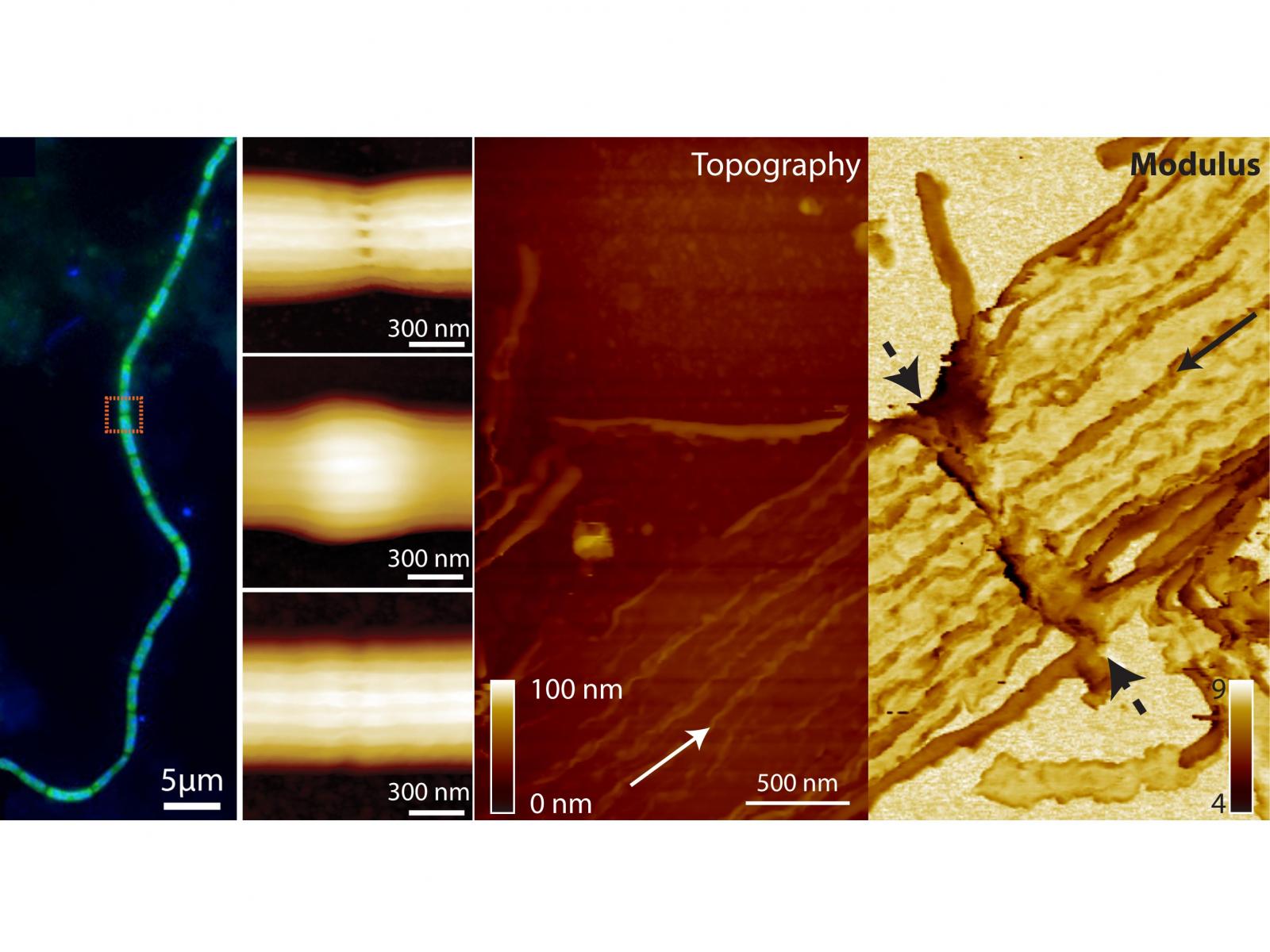 The left column, bacterial cable under optical microscopy, which is hybridized with a specific ELF654 FISH and DAPI probe. The middle column, three kinds of cell junctions. The right column, AFM topography and Young’s modulus (logarithm) map of inside of outer membrane after nanodissection. The black dashed arrows indicate cell junction. The solid arrows indicate one string attaching at the inner face of outer membrane.

The way marine sediments consume oxygen recently became clearer with the discovery of bacterial filaments that ferry electrons from below the surface. These organisms, aptly known as cable bacteria, have been found to transport electric currents a centimeter deep into the sediment.

At the molecular scale, a centimeter qualifies as long-distance, making cable bacteria intriguing conductors—not only for their role in nature, but for their potential to inspire new advances in nanoscience. However, their structure and workings remain poorly understood.

Now a team of researchers including Shuai Zhang, a materials scientist at Pacific Northwest National Laboratory, have dissected the bacteria's cells, revealing their inner structure under the outer membrane. A paper describing the work, "In vitro single-cell dissection revealing the interior structure of cable bacteria," was published in the Proceedings of the National Academy of Sciences in August 2018.

Why it matters: Cable bacteria help drive sulfide oxidation, one of the most energy-releasing reactions in a cascade of aerobic and anaerobic redox processes that take place when organic material decomposes in marine sediments. Understanding their structure can further illuminate these marine processes while opening a path to cultivating such conductive nanowires for biotechnology uses.

Summary: Cable bacteria, or Filamentous Desulfobulbaceae, are rod-shaped chains of cells shown to conduct electric current in marine sediment. Yet, little is known about how these microsize bacterial cells function. "How do they divide," the researchers asked in the PNAS paper, "and how can they form continuous centimeter filament with such surprising stability?"

The team sought answers using atomic force microscopy (AFM), a technique that allows for in vitro nanodissection of cells without contamination.

"It's challenging to dissect these cells, which are less than a micrometer across, with controlled spatial accuracy and force," Zhang says. "We used an AFM probe as a nanoscalpel."

Peering inside, the researchers found strings attaching to the inner face of the outer membrane along the long axis of the filament. They pinpointed three different types of cell junctions, possibly offering clues about how the cells grow and divide. The researchers also used dynamic nanomechanical mapping to chart the inside of the bacteria's outer membrane, finding that the membrane's ridges enveloped strings on the inside.

"We confirmed the strings can pass through the cell junctions, connect individual bacterial cells along the long-axis, and maintain the filament integrity," Zhang says.

Based on the findings, the team proposed a model for the division and growth of cable bacteria, illustrating the possible structural requirements for forming these compelling filaments. Both the cable bacteria itself and strings might be used to synthesize new functional materials or devices, while the chemical nature of the string could inspire mimetic materials, according to Zhang.

The work was conducted at the Interdisciplinary Nanoscience Center at Denmark's Aarhus University, where researchers first discovered the cable bacteria's conductive role in marine sediments, describing it in a 2012 Nature paper. Zhang's work is supported by PNNL's Materials Synthesis and Simulation Across Scales (MS3) Initiative, a four-pronged initiative aimed at building the bridge to a carbon-neutral economy.

What's next? Having shed light on cable bacteria's inner structure, scientists have further mysteries to unravel. The discovery of string formations that run between the bacterial cells raises one possible way the filaments conduct energy, but researchers have yet to confirm that transporting mechanism or the chemical fingerprint of the strings themselves. Continuing to explore the characteristics and behavior of these microcables will help scientists understand their technological potential.