Homes fitted with new technology may reduce costs and carbon 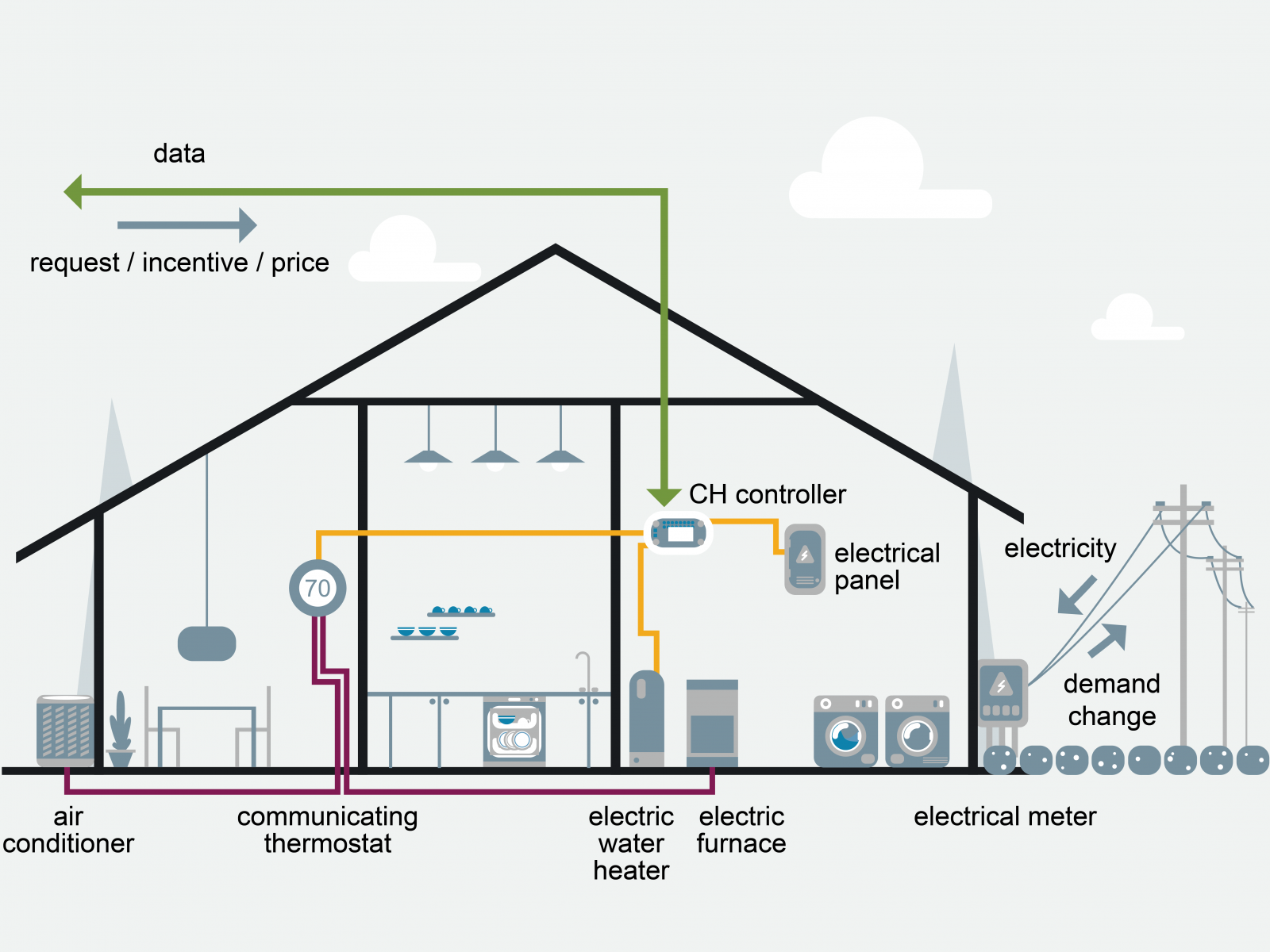 This diagram outlines the relationship between appliances, a connected home (CH) control system developed by PNNL, and the power grid. Testing has shown the control system can successfully connect four appliance types with the grid and control their electricity demand.

Researchers at Pacific Northwest National Laboratory (PNNL) have developed a control system that could make most of America’s homes more capable partners in managing the nation’s electricity resources.

The control system effectively transforms existing home heating and cooling units and hot water heaters into smart appliances that can manage their electricity use in ways that help the grid coordinate supply and demand. The system could benefit an estimated 120 million homes.

“From the beginning, our goal has been to develop a solution that’s inexpensive, simple to install and use, and puts residents in charge of its operation,” said PNNL’s Michael Brambley, who leads control system development. “In return for helping the grid, households must receive an incentive, such as a more favorable electricity rate.”

The control system work has been funded by the Department of Energy’s Building Technologies Office (BTO) as part of a connected homes project.

A connected home contains smart appliances with communication and control capabilities, which enable the appliances to automatically respond to information from an electric utility. Examples include smart, connected thermostats, which make heating and cooling systems connected, and specially equipped water heaters. Some newer homes already have these types of appliances, but most homes do not.

Because solar and wind power are “variable”—that is, their power output ebbs and flows with the rise and fall of the sun and wind—the grid sometimes must quickly pivot to other types of electric generation or manage demand in ways to avoid grid instability and meet electricity needs economically. The generation sources that currently help bridge the gap are, in general, fossil-fuel-fired plants, which increase carbon dioxide emissions and contribute to global climate change.

Connected homes can help address the variable nature of solar and wind energy as well as other conditions on the grid. Home appliances with smart controls that factor in occupant comfort preferences, working in concert with utilities and the grid, can quickly and automatically change their electricity demand to help even out variations and ultimately reduce the amount of greenhouse gases entering the atmosphere.

This “flexible demand” capability, if realized in tens of millions of homes, would give the grid more headroom to coordinate supply and demand at times when clean energy may not be available. Analysis conducted by PNNL and others shows that this flexibility can also reduce costs for both bill payers and utilities.

“Connected homes are becoming increasingly more common, whether by consumer demand or by updated building energy codes,” said Marc Costa, director of policy and planning at The Energy Coalition. Costa served on a BTO peer-review committee that evaluated the progress of PNNL’s control system.

“As customers are trying to save money on their bills, replace major appliances, or are just interested in convenient ways to interact with their homes, there is a major need for objective research in this field. The work of PNNL is critical to understanding the potential impacts and solutions for consumers and for the decentralization of our energy system,” Costa added.

Homes use more than one-third of the nation’s electricity and represent a huge opportunity for achieving flexible demand.

“We believe an effective and inexpensive control system installed in existing homes not only is good for grid operations, but for providing lower-cost energy to households. Our solution is designed for the millions of homes that could benefit from this method but don’t prefer or can’t afford to buy smart appliances,” Brambley said. “Our retrofitable system should enable them to take advantage of emerging programs that offer beneficial electric rates and other incentives for homes responsive to grid needs.”

PNNL worked collaboratively with BTO to create a development strategy for the control system and has partnered on the project with two smart technology firms—ecobee and Shifted Energy—as well as the University of Oklahoma.

In testing, the hot water heater and air conditioning results were particularly promising.

Electric furnace tests also yielded demand reductions of 25 percent. By having the control automatically preheat the home by three degrees above the usual thermostat setting right before a peak grid period, the reduction can be increased to nearly 46 percent over a four-hour span.

In 2022, the project team will prepare the control system for deployment in occupied homes. “Ideally, our results will attract industry partners and lead to a commercial product that can be used nationwide,” Brambley said.

How To Protect Yourself From Wildfire Smoke When Indoors