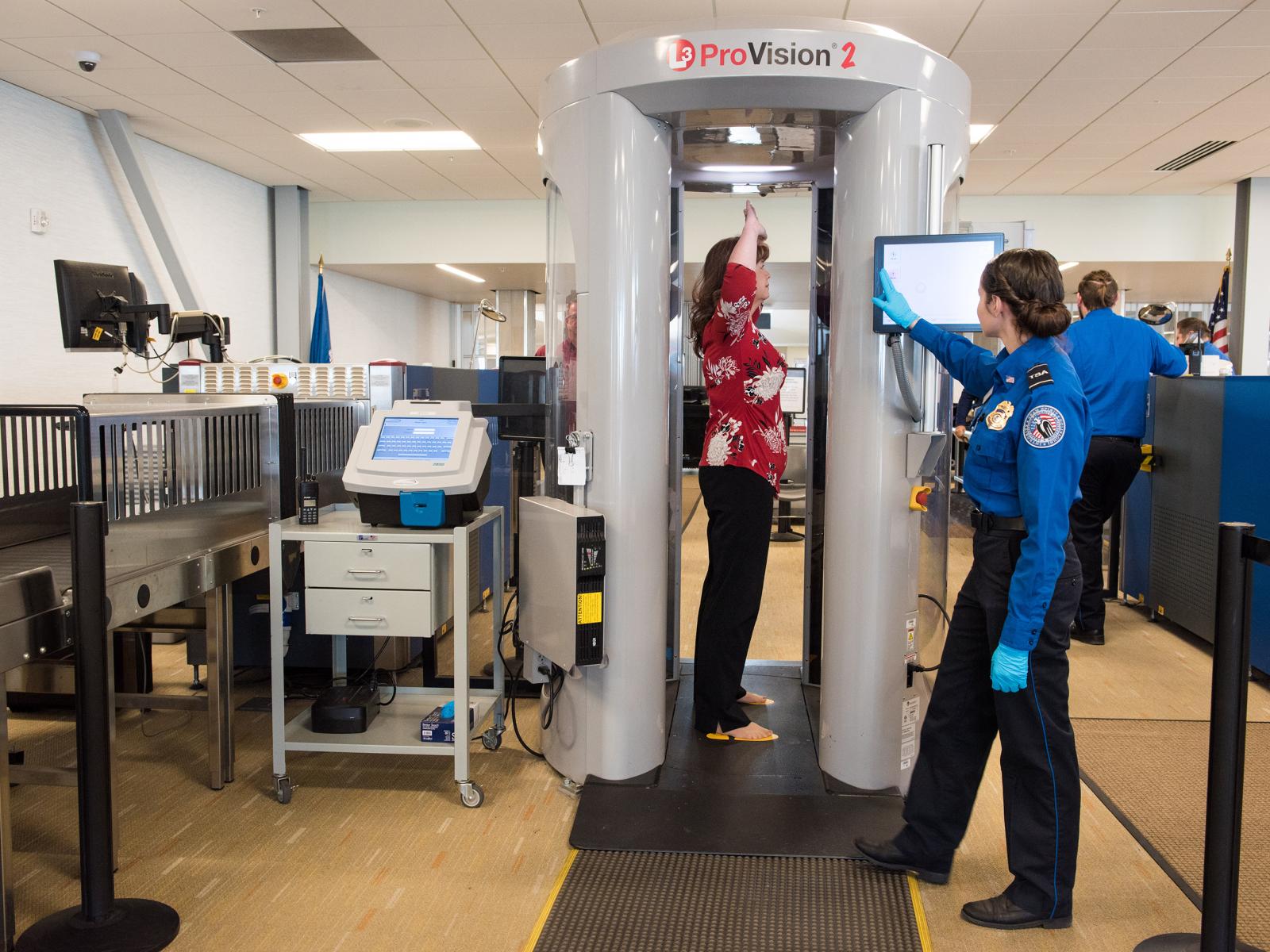 PNNL engineers developed the millimeter wave technology for screening passengers who might try to conceal metallic or non-metallic weapons in layers of clothing. The Transportation Security Administration has installed the body scanners, also referred to as Advanced Imaging Technology, at airports the world over, including this one at the Pasco Airport.

If you have been through airport security lately, you likely have done what those of us at the Department of Energy's Pacific Northwest National Laboratory call the "PNNL salute."

Airline passengers strike this pose, pausing momentarily with arms above their heads, so a PNNL-developed technology can quickly scan them for concealed weapons and other threats that traditional metal detectors would miss.

The need for solutions like this was driven home after the 9/11 terrorist attacks, which we remembered solemnly earlier this month.

PNNL is proud to use its broad science and engineering capabilities to help develop and deploy technologies to protect airline passengers and enhance our nation's security.

For example, the three-dimensional imaging technology mentioned above builds on PNNL's pioneering research in optical and acoustic holography dating back to the 1960s.

Scientists and engineers determined how to use non-harmful, ultrahigh-frequency radio waves — called millimeter waves — to penetrate clothing and scan for concealed objects such as liquids, gels, plastics, powders and ceramics.

With support from the Department of Homeland Security's Screening at Speed program, PNNL researchers continue to advance and expand millimeter wave technology to develop solutions for the future.

For example, they are working on a shoe scanner that could replace the inconvenient pre-boarding ritual of removing your shoes.

Integrated into existing body imaging portals, the system could provide a three-dimensional image of passengers' footwear while it remains on their feet — quickly identifying concealed threats.

PNNL researchers also are exploring a walk-by screening system that would one day eliminate the need for the PNNL salute.

The concept is akin to the futuristic technology in "Total Recall," where security officers spot a gun on Arnold Schwarzenegger's character as he walks through a subway station.

Similarly, PNNL's technology would allow passengers to walk through security checkpoints without pausing as the imaging system screened them in real time with increased efficiency and effectiveness.

Beyond passenger screening technologies, PNNL researchers are developing an ultrasensitive technology that can quickly and accurately detect vapors from explosives, deadly chemicals and illicit drugs.

The technology relies on a mass spectrometer, a scientific instrument that measures or detects isotopes and molecules of interest by separating them according to charge and mass.

As the vapor samples make their way to the spectrometer, they collide with electrically charged ions. PNNL scientists determined they could tweak these ions to selectively detect common explosive compounds or "sniff out" traces of specific narcotics and other chemicals.

With early results demonstrating greater accuracy, the technology could offer an attractive alternative to today's time-consuming methods that rely on swabs and swipes, or drug- and explosive-sniffing dogs that require expensive care and training.

PNNL researchers are working to make the technology more portable and easier to integrate with existing screening methods for use in places like airports and mail facilities.

Lastly, PNNL will soon deploy its Airport Risk Assessment Model, or ARAM, in a partnership with the Transportation Security Administration and the Seattle-Tacoma International Airport. This web-based software helps airports prioritize their resources based on risk.

With a simple click of a button, ARAM analyzes multiple sources and quantifies the core components of risk: consequences, vulnerabilities and threat magnitudes.

It then evaluates a mathematical formula that assesses the effectiveness of each security measure and determines where each resource should be deployed to maximize the potential to reduce risk.

Many of us recall the airline slogan, "flying the friendly skies," from years ago. Today, PNNL's science and technology are making it possible to detect threats, increase security and minimize risk — so we can all fly the safer skies.