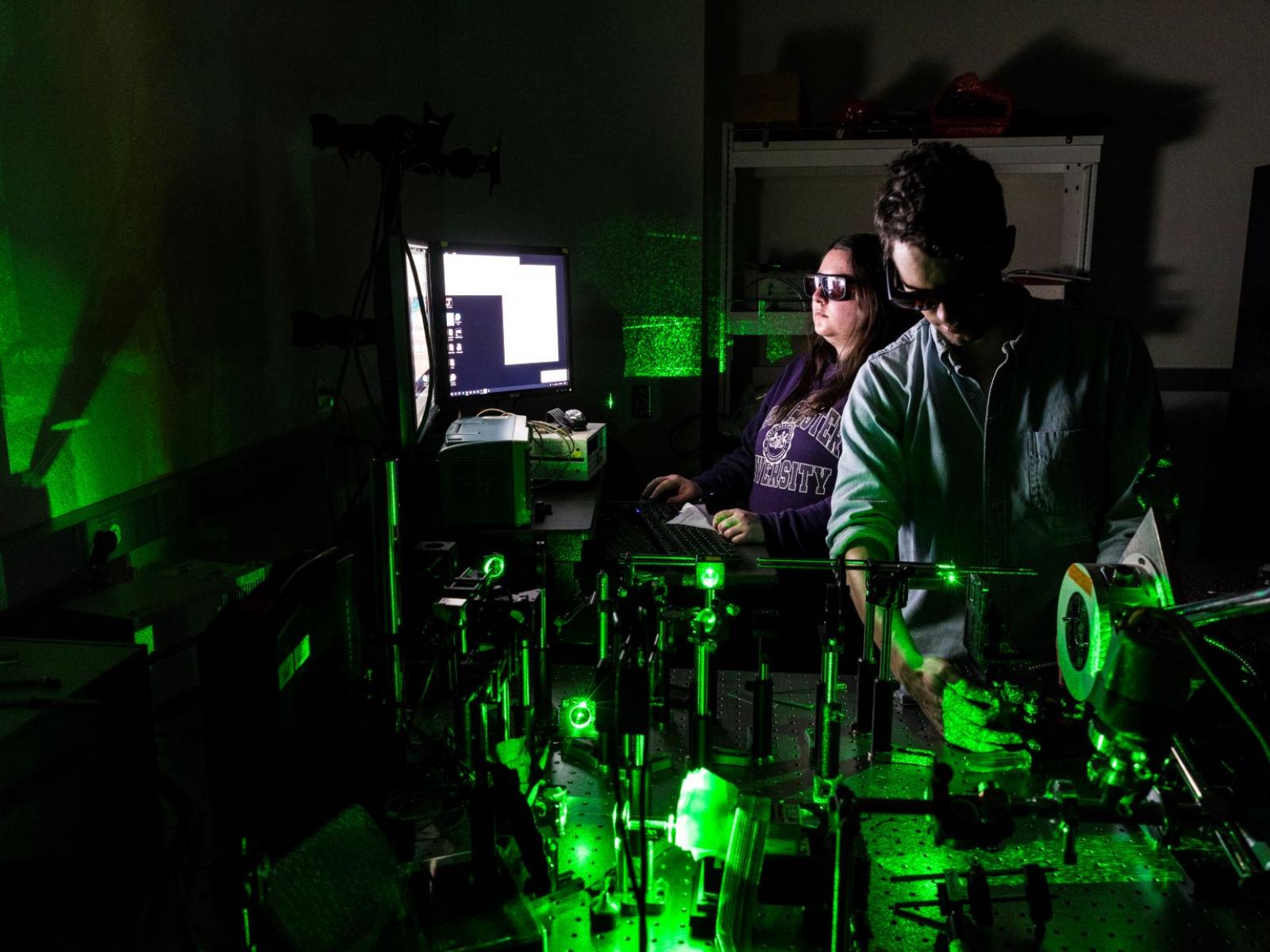 University of Washington researchers Abbie Ganas and Matthew Crane operate equipment that employs a laser to heat the gasket of a high-pressure diamond anvil cell above 3,100 F, more than one-third the temperature of the sun.

Researchers have come up with a new method for creating synthetic “colored” nanodiamonds. They’re not in the jewelry business — but they are paving the way for the realization of quantum computing by finding a better way to insert beneficial defects into nanoscale diamond dust.

Quantum computing promises to solve problems far beyond the abilities of current supercomputers — known as classical computers. Pacific Northwest National Laboratory is teaming with the University of Washington and others to help bring about the quantum computing revolution.

Peter Pauzauskie is a part of that team. He holds a joint research appointment at PNNL from UW, where he is an associate professor of materials science and engineering. Pauzauskie and fellow researchers from UW and the U.S. Naval Research Laboratory are studying materials that will be necessary for quantum computing.

The team used tremendously high heat and pressure to insert silicon into a nanodiamond’s crystalline structure. The silicon creates a defect in the diamond called a color center. Nanodiamonds doped with other elements can emit different colors. In this case, the silicon created a light pink hue. Silicon defects are already being investigated as functional elements that could provide single photons for secure quantum communications.

The new approach, described recently in the journal Science Advances, allows researchers to have more control in “doping” a carbon-rich diamond precursor with silicon or virtually any element of interest – even ones that haven’t been possible before.

“Our approach is analogous to adding sugar to a cake batter before baking it instead of trying to tack it on afterwards,” said Pauzauskie. Other methods insert dopants to the diamonds after they’ve been created in a lab, but offer no control over where the elements are placed in the diamond. “Baking the element of interest into the diamond gives us more control over performance and potential applications, including those for quantum computing.”

Importantly, this new approach also led to a serendipitous surprise. Researchers found that nitrogen from the air and argon gas they had used in the process of making the nanodiamond had been incorporated into the diamond material, along with the silicon.

Typically, a noble gas like argon won’t react or incorporate into a crystalline structure.

"The fact that argon was incorporated into the nanodiamonds means that this method is very likely able to create other point defects that have potential for use in quantum information science research," said Pauzauskie.

Researchers hope next to dope nanodiamonds with larger noble gas atoms that might be of use in fields such as quantum communications and quantum sensing.

This is the first time scientists have used high temperature and pressure to introduce noble gases into nanodiamonds. The temperatures used to synthesize the diamond with specific defects are one-third the temperature of the surface of the sun and the pressure is near that at the center of the Earth.

“Our ability to tailor the quantum behavior of materials for next-generation computing requires close collaboration among research teams with complementary expertise,” said Jim De Yoreo, PNNL materials scientist and co-director of the Northwest Institute for Materials Physics, Chemistry and Technology. “By teaming with scientists at the University of Washington, we are bringing together the creative energies and advanced instrumentation that lead to discoveries such as this novel method of making nanodiamonds.”

PNNL recently joined with UW and Microsoft Quantum to create the Northwest Quantum Nexus to advance quantum information sciences in the Northwest. PNNL’s focus is on developing algorithms and materials for quantum computing.

Partial funding for this research comes from PNNL’s Materials Synthesis and Simulation Across Scales Initiative, which is focused, in part, on preserving the unique properties of nanomaterials.