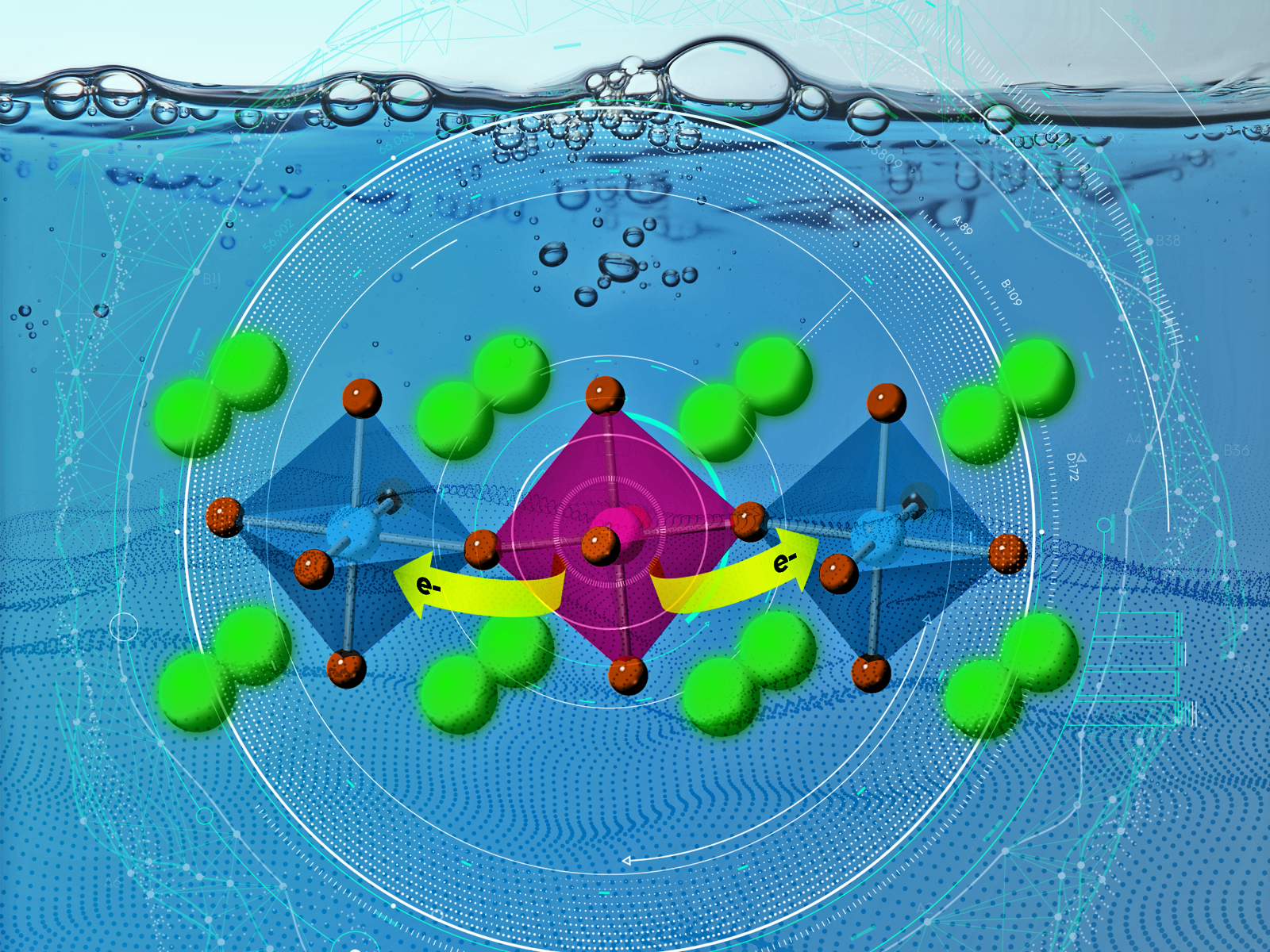 High-precision synthesis and measurements of oxide thin films helped researchers determine how iron affects the way the material functions, for instance in its ability to convert water to oxygen in a fuel cell.

Without thin films, there would be no modern electronics or high-quality mirrors. The semiconductor chips used in our cell phones and computers rely on thin films made of different materials, including metal oxides that contain at least one metal as well as oxygen.

Metal oxide thin films serve as more than just a layer within electronics. They have applications in sensing, catalysis, and energy storage. Creating thin films that can replace the liquid layer in batteries or promote specific chemical transformations requires understanding the materials at an atomic level. At Pacific Northwest National Laboratory (PNNL), researchers are looking into how to design metal oxide thin films that can be harnessed to produce clean energy.

“I like to think of what we do as spray painting a target with atoms,” said PNNL materials scientist and Laboratory Fellow Scott Chambers. His team uses a technique, called molecular beam epitaxy, for depositing elements atom by atom on top of a solid crystal. This enables researchers to make high-quality, crystalline thin films with precise control over their composition and structure.

For example, some thin films always conduct electricity and others do not. By stacking different films, scientists can change how they respond to an electrical current.

“Our ability to develop advanced energy technologies depends on how well we can make thin layers of materials,” said Peter Sushko, a materials scientist at PNNL.

Le Wang, a PNNL materials scientist, led a recent study that harnessed atomically precise thin films to make stable high-performance catalysts. They discovered that varying the composition of lanthanum nickel iron oxide (LaNi1-xFexO3 or LNFO) thin films affects their ability to convert water into oxygen. This reaction is important for clean energy production. LNFO has the potential to reduce the need for or replace expensive precious metal-based catalysts.

Previous research demonstrated that replacing some of the nickel with iron in lanthanum nickel oxide increases the material’s ability to generate oxygen. However, the exact reason for this enhanced activity was unclear.

The PNNL research team used its high-precision films and instrumentation to address this uncertainty. The work, published in Nano Letters, provides clear evidence and explanations for why mixing nickel and iron leads to more efficient oxygen formation.

The PNNL researchers synthesized a series of high-quality LNFO thin films, from pure lanthanum nickel oxide to lanthanum iron oxide and a range of compositions in between. They also made several high-quality standards, all measured with the same equipment, that enabled researchers to home in on small, but consequential, changes in the electronic structure of the materials.

The small changes showed the iron transferring some of its electrons to the nickel in a process known as charge transfer. The charge transfer makes it easier for the material to convert water to oxygen. Identifying this previously unseen charge transfer gave researchers insight into why LNFO acts as a better catalyst.

The team uses a multi-pronged approach in its research. They synthesize new materials and characterize their structure in the laboratory. However, benchtop experiments have limits to how much detail they can reveal. The team’s not-so-secret weapon? Theory.

Combining theory and experiments generates deeper insights into oxide thin films. Computational modeling provides insight into how atoms move on the film surface and how electrons rearrange at scales smaller than the diameter of an atom. In this project, the researchers wanted to see if atoms in simulated LNFO showed the same subtle signs of charge transfer that they observed in the lab.

“It was an exciting day when we got Peter [Sushko]’s calculations back and they matched our experimental data so well,” said Wang. “Those results really validated our argument about the importance of charge transfer in LNFO.”

Looking to the future of thin films

This research will continue at the ESC, where large windows will spotlight a new high-visibility lab space. Anyone who comes into the ESC lobby will be able to see the researchers making new samples. “We’re excited for the window into our science the move will provide for visitors to the ESC,” said Sushko. “In addition to the larger laboratory and additional instrumentation, we’re all looking forward to being together in the same building.”

Up next? The researchers plan to partially replace lanthanum with strontium in the same film system, creating an oxide with four different metals. This will help the team further understand changes in the structures and properties of complex oxide films. Understanding such processes will guide new synthesis efforts to design even better catalysts.

This work is supported by the Department of Energy, Office of Science, Basic Energy Sciences program, Division of Materials Sciences and Engineering.