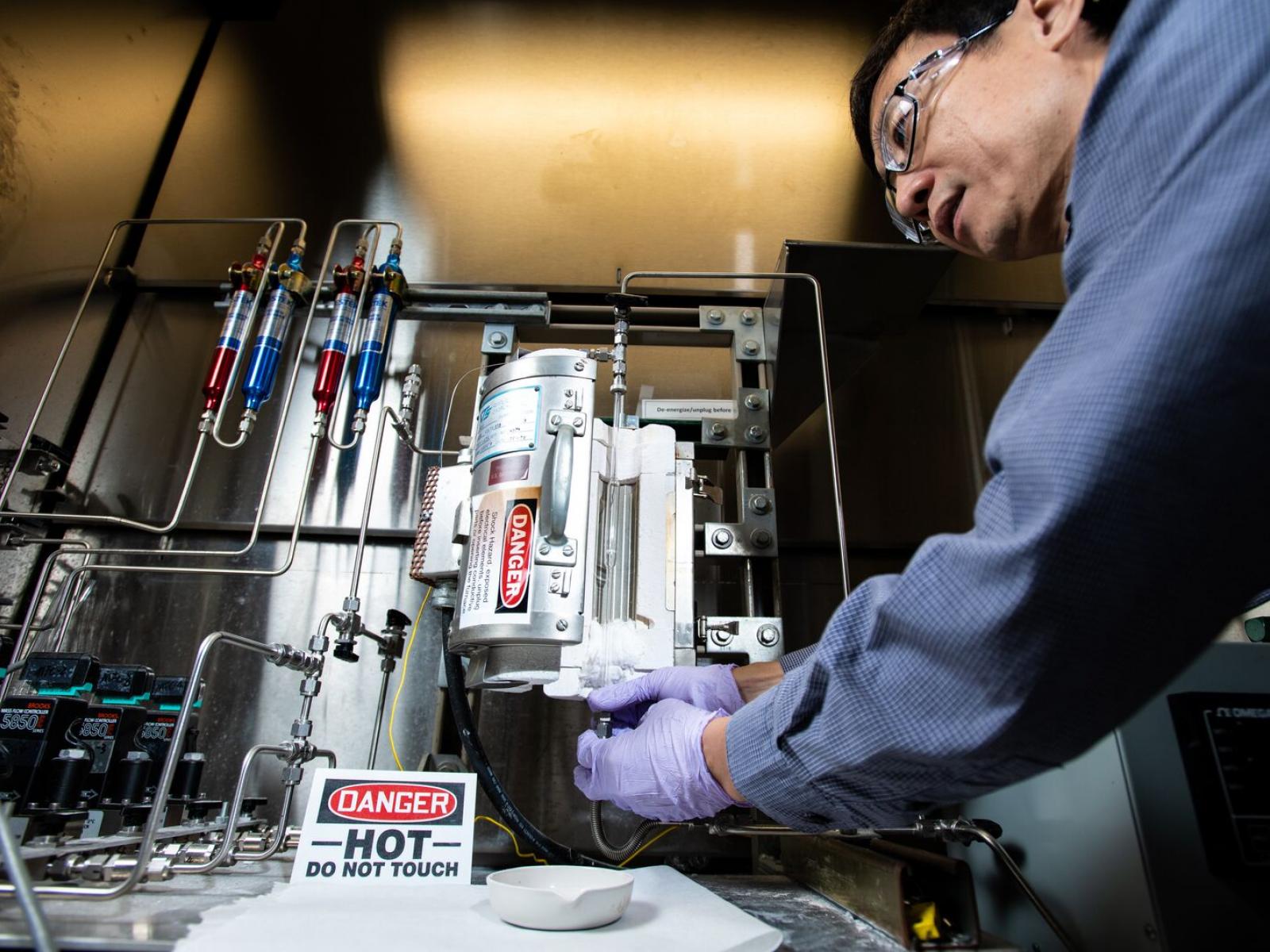 The team’s findings could aid the design of catalysts that work better and last longer during the nitrogen oxide conversion process known as selective catalytic reduction.

Heavy-duty diesel trucks on the road today are equipped with aftertreatment systems that include selective catalytic reduction (SCR) technology using urea solution as a reducing agent to curtail harmful nitrogen oxide (NOx) emissions from engine exhaust before they reach the tailpipe. SCRs rely on a catalyst to help chemically convert NOx gases into nitrogen, water, and small amounts of carbon dioxide.

Like anything else subject to the laws of nature, catalysts—materials that help a desired reaction efficiently take place—tend to slow down the longer they are in use. Scientists at Pacific Northwest National Laboratory (PNNL), working with researchers at Washington State University and Tsinghua University, discovered a mechanism behind the decline in performance of an advanced copper-based catalyst. The team’s findings, featured on the cover of the journal ACS Catalysis, could aid the design of catalysts that work better and last longer during the NOx conversion process.

The latest research began with a lingering mystery. In a 2017 study, researchers used electron paramagnetic resonance (EPR) to examine the atomic-level behavior of one state-of-the-art catalyst, Cu/SSZ-13. Cu is copper and SSZ-13 is a zeolite, a tiny structure built from silica that has a caged structure and to which the copper is attached.

EPR is a type of spectroscopy that can help illuminate the electron activity and internal structure of certain materials. For the study, the researchers used the EPR available at the Environmental Molecular Sciences Laboratory (EMSL), a U.S. Department of Energy Office of Science user facility located at PNNL.

EPR spectroscopy, coupled with tests using a few other techniques, led to new insights into the excellent stability of Cu/SSZ-13 under high temperatures—one of the reasons it makes such an appealing ingredient for aftertreatment systems. But EPR studies also revealed a puzzling anomaly. In catalyst samples that had been artificially aged to mimic real-world aging conditions, a magnetic signal showed up in the EPR spectra.

"This question stayed in our minds after that paper was published three years ago," said Feng Gao, a staff scientist in PNNL’s Physical Sciences Division and co-author of both studies. "What exactly was that tiny signal?"

Cu/SSZ-13 consists of copper that serves as the “active sites” on which NOx interacts with ammonia, which comes from a urea solution in SCR. This interaction forms harmless nitrogen and water. In the latest study, the researchers conducted another round of imaging at EMSL and combined that with theoretical modeling to figure out how the catalyst's copper ions were changing after it had aged.

"This question stayed in our minds after that paper was published three years ago. What exactly was that tiny signal?" - Feng Gao, PNNL staff scientist

The new analysis, which was supported by the U.S. Department of Energy's Office of Energy Efficiency and Renewable Energy, Vehicle Technologies Office, revealed that some copper ions were relocating within the SSZ-13 zeolite support cages, moving closer together as they did so. This proximity among copper ions created the curious signal researchers observed in 2017.

But this insight, it turns out, didn't tell the whole story. The amount of copper that gave rise to such a tiny EPR signal was too small to explain the twofold decrease in catalyst activity that the researchers saw in reaction tests with aged samples. Something bigger was going on.

The team did yet another round of imaging, this time conducting operando EPR, in which the catalyst was scanned while the SCR reaction took place. During the reaction, copper goes from one oxidation state to another and back again, losing and gaining electrons, called “redox cycling” in scientific terms. In fresh catalyst samples, this cycling happens quickly. In aged samples, however, the operando EPR showed a high percentage of copper stuck in one oxidation state—that is, slower cycling.

"After the catalyst has been aged, all the copper ions reposition themselves. For the majority, the relocation was so subtle that spectroscopy hardly captured any changes. This is why we are particularly thankful to the ones that relocated dramatically,” Gao said. That small percentage, he explained, gave rise to the curious EPR signals and enabled a better understanding of the bigger picture.

Why, then, did the aged catalyst become less active? “The zeolite support holds onto all copper in the various oxidation states more strongly after they reposition,” he said. “It's like the copper is locked inside a jail cell, and this lack of mobility makes them less reactive."

Knowing more about how catalysts like Cu/SSZ-13 deactivate can open the way to solutions for boosting their longevity. Scientists can optimize the amount of active sites within a catalyst, Gao said, and think about additives that could head off the overly cozy relationship that develops over time between copper and their zeolite supports.

The study, "Probing Active-Site Relocation in Cu/SSZ-13 SCR Catalysts during Hydrothermal Aging by In Situ EPR Spectroscopy, Kinetics Studies, and DFT Calculations," was published in the journal ACS Catalysis. With Gao, co-authors were Eric Walter and Ying Chen of PNNL; Yani Zhang of PNNL and Tsinghua University; Yue Peng and Junhua Li of Tsinghua University; Kyle Groden of Washington State University; and Jean-Sabin McEwen and Yong Wang of PNNL and Washington State University.