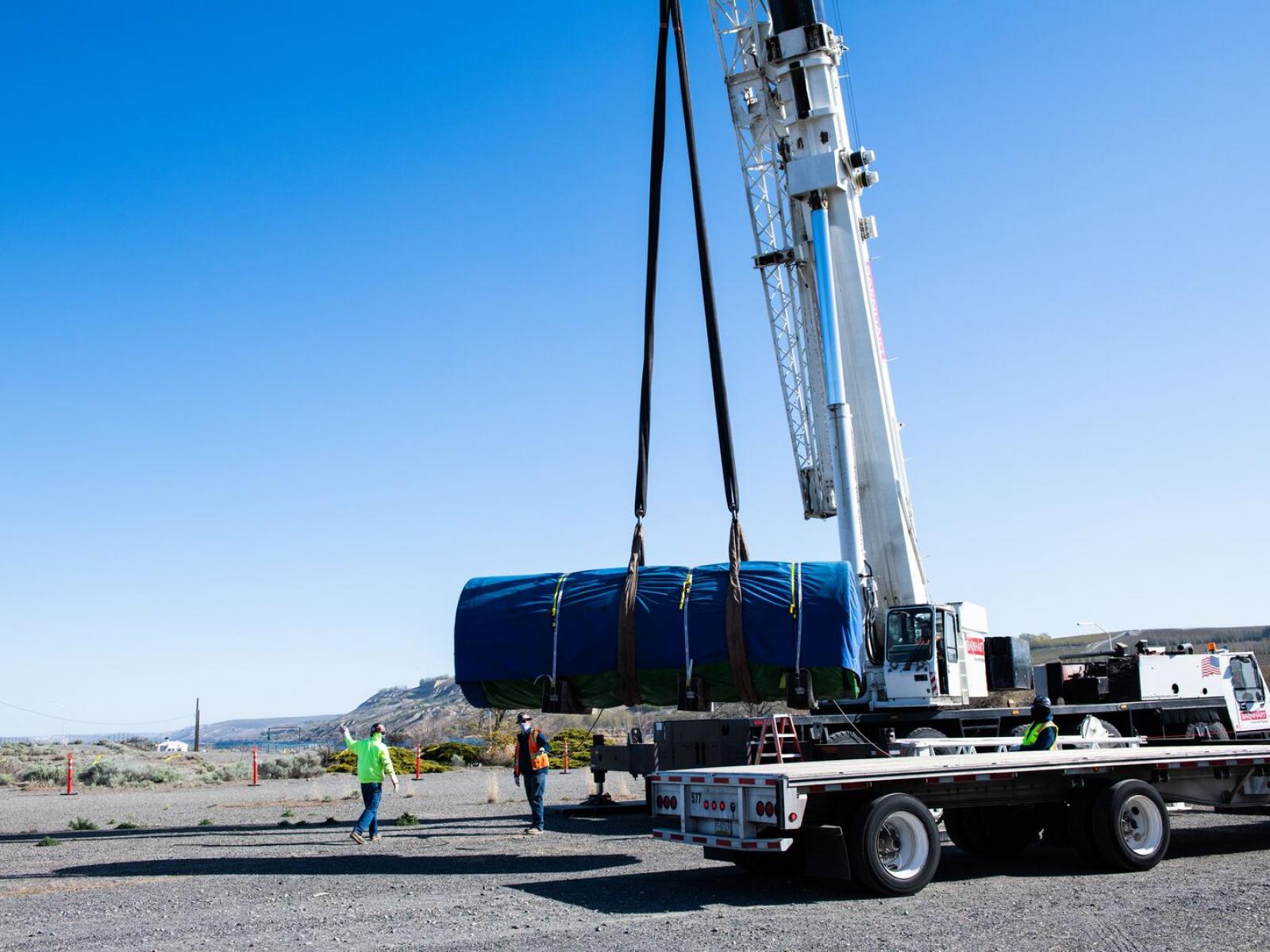 Three spent nuclear fuel canisters arrived at Pacific Northwest National Laboratory on Wednesday, April 14, 2021. The canisters have never held nuclear material. Researchers will use the containers to deepen their ongoing investigations in how spent nuclear fuel behaves while stored for extended periods.

RICHLAND, Wash.—When nuclear engineer Brady Hanson stood before a group of scientists seven years ago, he knew that exploring the behavior of spent nuclear fuel in prolonged storage required a rigorous approach. And he said as much.

“There’s no simple solution here,” he told his fellow researchers, who had convened to settle on a plan to exhaustively probe safety concerns tied to the extended storage and transportation of spent nuclear fuel, with a special focus on fuel cladding: the metal tubing that encases fuel pellets. “We’ll need to explore every way the fuel could degrade under realistic conditions.”

Now, on the tail end of a decade’s worth of thorough scientific investigation that demonstrates dry fuel storage is indeed safe and secure, he feels differently. “I was wrong! The scientific method showed us what reality is—that long-term storage is safe.”

Intensively focusing on the potential for failure in nuclear fuel cladding revealed that, even under extreme but realistic conditions, each degradation mechanism was less problematic than anticipated, and each point of concern was successfully settled.

Stress from traveling by ship, train, and truck proved to be negligible, for example, and the fuel temperatures were much cooler than expected. The Office of Nuclear Energy’s Spent Fuel and Waste Science and Technology program now looks toward adding to the extensive body of research by applying the same thorough, integrated approach to the canisters that house spent nuclear fuel from the nation’s commercial nuclear reactor plants.

On Wednesday, April 14, Hanson and a team of researchers at the U.S. Department of Energy’s Pacific Northwest National Laboratory received a boon for ongoing investigations: three completely empty, unused spent fuel canisters, each weighing over 48,000 pounds. These stainless steel containers will deepen ongoing research efforts into the forces—from infinitesimally small cracks to bumps incurred through transport—that could compromise such containers over many decades.

A place for fuel

Today, nuclear power utilities store over 80,000 metric tons of spent nuclear fuel across the nation. Since the fuel will remain in dry storage longer than was expected, PNNL scientists are working to better understand exactly how the fuel behaves under extended storage conditions, how the canisters age, and the forces the two would undergo when shipped and stored for long periods.

“No one intended to store the fuel for this long,” said nuclear engineer Steven Ross, who added that the research will help identify not only how best to store the fuel, but also if and when it should be repackaged. “Studying these canisters can help us better understand their long-term behaviors and the degradation mechanisms at play.”

The canisters PNNL received have never held nuclear material. Part of a larger batch provided by the DOE Office of Nuclear Energy, the remaining containers have gone to the Electric Power Research Institute, Oak Ridge National Laboratory, and Sandia National Laboratories—all of which will conduct complementary research on spent fuel storage.

At the outset of the analysis Hanson led, he and others identified several areas worth exploring. Among other questions, they asked: can we monitor what’s going on inside the canisters without opening them? Can cracks form in their steel walls?

“Before degradation happens,” said Hanson, “how do we detect it? How do we mitigate it? And if it does happen, how do we repair it so it doesn’t affect the health or safety of the environment, our staff, or the public?”

The questions helped shape lines of research, which Hanson leads, that comprise part of PNNL’s Spent Nuclear Fuel program and complementary projects at other national laboratories. Much of the research has relied on pieces, mockups, or models of canisters. The new containers offer PNNL’s first chance to strengthen those investigations using full-scale products.

Chief among areas of focus is stress corrosion cracking. Nationally recognized experts at PNNL are conducting laboratory-scale experiments to determine what causes cracks and how fast they grow under various conditions. Cracks can form, even in stainless steel, when airborne particulates and salts settle on the canisters and draw in atmospheric moisture to create a brine.

That brine may compromise the steel, potentially forming cracks just a few microns in size. For comparison, a U.S. penny measures over 19,000 microns across.

PNNL-developed models can project how salts and particulates interact with the canisters. By placing heaters inside the empty vessels and observing what brines form on their exterior, scientists can better inform those models and uncover what conditions lead to degradation, said Hanson.

Sensors that emit acoustic pulses into the canisters can, without the need to open them, reveal flaws or residual water left from the cooling process. Some sensors analyze a return echo after it travels through the canister walls and bounces back—its second pulse reflective of cracks or substances it passed through. Others receive the acoustic pulse on the container’s other end, akin to a pitcher throwing a baseball and a catcher receiving it.

Nuclear engineer Ryan Meyer, who leads research in the sensors used to monitor spent nuclear fuel, is eager to apply his years of research in crack formation to the new canisters.

“When you work on pieces or mockups or models,” said Meyer, “you’re always at some level of disadvantage in that you haven’t been able to demonstrate your concept on an actual system.”

Working with full canisters, said Meyer, offers the chance to test his group’s scientific ideas in the most robust sense, “and that’s a major barrier we’ll get to pass.”

Temperature monitoring is another ongoing research area that will soon be bolstered by the arrival of the new canisters. By monitoring temperatures at points around the entire cask body, the researchers ask, could a change in temperature uniformity help determine if it is leaking?

PNNL researchers are working to advance technologies to repair cracks, should they occur, and mitigate the potential for cracking. Solid phase processes, such as cold spray and friction stir welding, could provide solutions.

Cold spray entails spraying tiny metal particles at extremely high speeds, so fast that they bond with the target metal. This method offers an alternative to traditional arc welding, whose heat can compromise the structural integrity of steel.

Friction stir welding could also help repair cracks or even build stronger canisters from the outset. Here, two metals are joined by softening them with frictional heat, producing a stronger bond than is possible through arc welding. Neither cold spray nor friction stir welding melts metal.