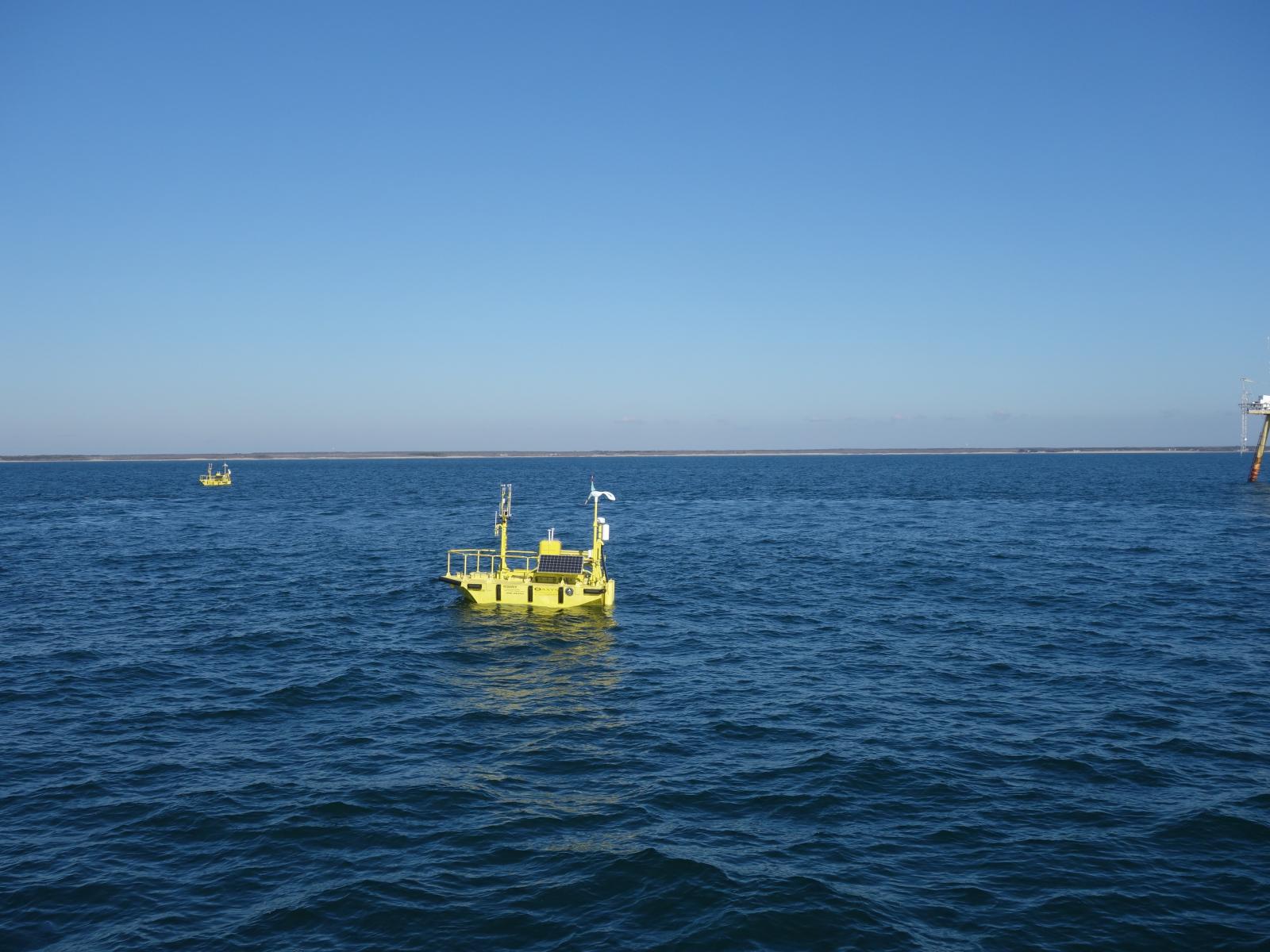 One of two DOE lidar buoys on station off the Atlantic City, New Jersey coast. Enlarge this image.

Results: Researchers at Pacific Northwest National Laboratory deployed a second wind-measuring buoy stationed off the coast of New Jersey in December. The first is positioned 40 kilometers east of Virginia Beach and has been in operation for one year.

The buoys are equipped with the latest in meteorological and oceanographic equipment and are part of a larger effort to understand and measure the power-producing potential of winds that blow off-shore.

"We know off-shore winds have lots of energy, and these buoys will help us better understand exactly how much they really have at the heights of wind turbines," said PNNL atmospheric scientist Dr. William Shaw.

Why It Matters: Harnessing the power of the sun, and even wind as it rolls across open landscape is now a familiar sight. But what about off-shore coastal wind? Off-shore wind has great potential for generating energy. The problem is verifying computer models and their simulations of ocean winds

A recent report estimated the United States could power nearly 17 million homes by generating more than 54 gigawatts of offshore wind energy. This project will help gather much-needed information on the best way to harness that energy.

With PNNL's expertise in atmospheric physics and these platforms packed with instruments, much information can be gathered and analyzed about ocean-based wind resources. The installations herald a new frontier for US renewable energy developers, as there are currently no operating US ocean-based wind farms.

Methods: The equipment measures wind speed and direction up to 600 feet (200 meters) above the surface using lidar ("light detection and ranging") technology, and records air and sea surface temperature, barometric pressure, relative humidity, wave height and period, water conductivity and subsurface ocean currents. These measurements will help researchers understand the complex air currents and atmospheric physics involved when wind turbines reaching up to 600 feet above the surface are operational.

Understanding air-sea interactions is another facet of this research. Having subsurface ocean currents (using acoustic Doppler sensors) and air-sea temperature differences will help tackle those questions. The data gathered will be used to validate computer models of wind predictions with new sets of real-world information.

"Data provided by the buoys will give us a much clearer picture of how much power can be generated at specific sites along the American coastline," said Shaw. "This will enable us to generate that clean, renewable power sooner."

PNNL is overseeing the operation of the buoys for the U.S. Department of Energy. Researchers working from PNNL's Marine Sciences Laboratory in Sequim, Washington, commissioned the custom-made buoy in Seattle area waters in 2014. After being on display at the Department of Energy's headquarters in Washington, DC, the more recently deployed buoy was transported to the New Jersey site.

The buoys were purchased by DOE's Office of Energy Efficiency & Renewable Energy to improve offshore turbine performance in the near term and reduce barriers to private investment in large-scale offshore wind energy development in the long term. The buoys were manufactured by AXYS Technologies, Inc. in Sidney, British Columbia.