A Bridge to the Quantum Revolution 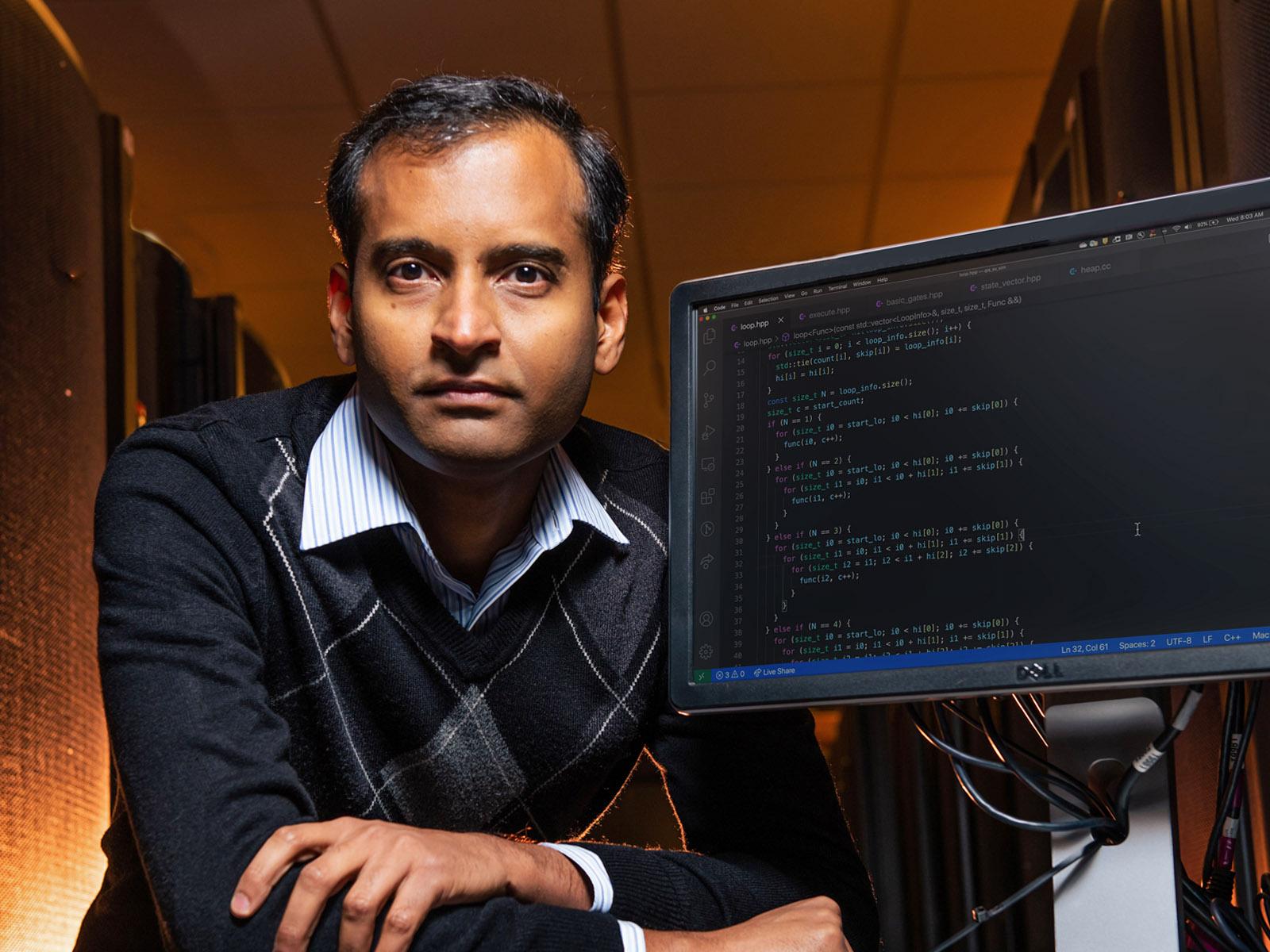 Computer scientist Sriram Krishnamoorthy is part of a team working with Microsoft Quantum to build a bridge to quantum computing.

When reliable qubit-based calculating devices arrive on the computing scene, they will not stand alone. They will need to cooperate with current scientific computing resources to reach their fullest potential. Now, Pacific Northwest National Laboratory (PNNL) computer scientists and the Microsoft Quantum team have taken a major step in that direction. Working collaboratively, they connected a PNNL-developed quantum circuit density-matrix simulator (DM-SIM) running on a U.S. Department of Energy (DOE) supercomputer with the Microsoft Q# quantum programming ecosystem.

This “bridging” capability is a stepping-stone that allows computer program developers to create and test algorithms to run quantum computers, even when the quantum computers themselves are still prototypes.

“We are building toward a robust development pipeline connecting our novel DM-Sim quantum circuit simulator to DOE computing resources,” said Krishnamoorthy. “This demonstration shows that we can successfully run a complete simulation that combines an independently built quantum simulation tool with Microsoft’s open-source programming ecosystem.”

In computing, these kinds of communication bridges are common and necessary. Every time you access a social network or send a text message, you are using one of these bridges, called application programming interfaces (APIs). Like simultaneous translators, API bridges allow computers to speak different languages but still understand each other.

In this case, the API created at Microsoft connects PNNL’s quantum computing simulation code to Microsoft Quantum’s Q# programming language and its  “quantum intermediate representation” (QIR)  via a PNNL-developed “wrapper.” The wrapper, together with QIR and the bridge API, allows Q# to run on the considerable computing muscle available at the Summit supercomputer located at Oak Ridge National Laboratory.

It’s a kind of mega API—one that enables simultaneous development and testing of both quantum devices and the software that will one day run on those devices. It’s an essential bridge to full-scale quantum computing, according to the research team.

“We are aiming toward a tool chain to solve computationally challenging chemistry problems,” said Li. “These problems require a co-development solution that gives our developers a chance to iteratively test and refine the algorithms that will operate quantum computers.”

While excitement builds around the promise of quantum computing, classical supercomputers still rule scientific computing. Their speed and reliability still can’t be matched by any quantum computing device. And quantum computers are notoriously error prone. DM-Sim is expected to shine a light on these errors, allowing researchers to simulate quantum circuits using a classical computer. As they learn more about how to make quantum bits, called qubits, more stable, the researchers will investigate the nature of these errors and how to tolerate their presence within quantum calculations. This research also supports a much larger effort, the DOE-supported Quantum Science Center, which aims to co-develop quantum algorithms and simulation.