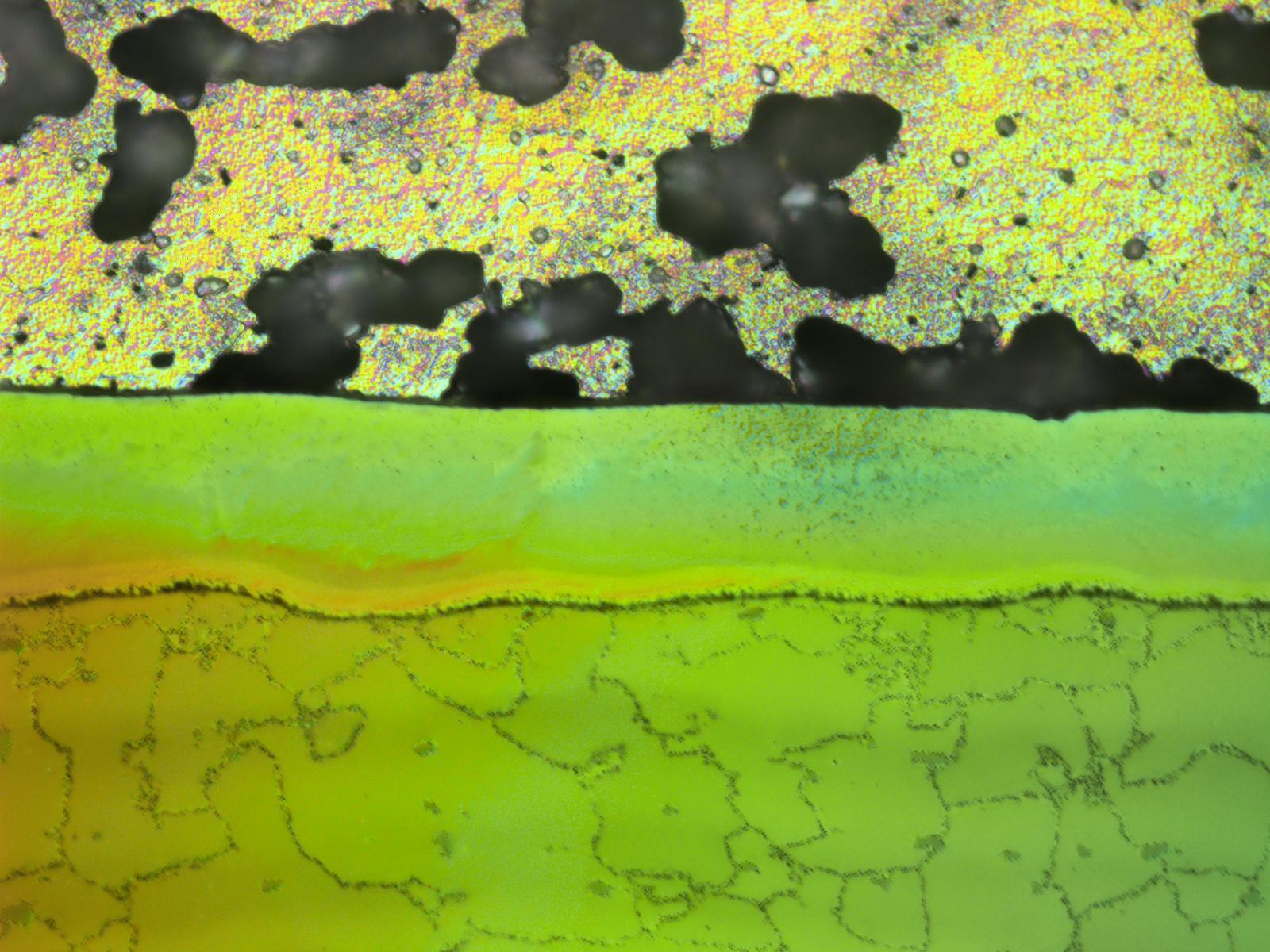 This cross-section of an irradiated fuel plate shows uranium-molybdenum metal grains beneath aluminum cladding material and a layer of zirconium.

How a material behaves depends on the way that material’s atoms are arranged at the nanoscale. But atomic arrangement is difficult to determine, especially when a substance is radioactive, such as in nuclear fuel.

Here, the arrangement of both atoms and their isotopes affects fuel performance and safety inside the reactor. Despite this, we don’t really understand how isotopes are arranged within nuclear fuel at nanoscale.

PNNL researchers are working to change that.

In support of efforts to reduce the nuclear proliferation risk of highly enriched uranium (HEU) fuel in nuclear research reactors, a team of PNNL researchers demonstrated that the abundance of uranium isotopes can be both measured and mapped in nanoscopic volumes of enriched uranium fuel.

Their unprecedented research, published in Nature: Scientific Reports, presents a powerful new way to test uranium and other radioactive materials at the nanoscale.

Lead researcher Arun Devaraj, a PNNL materials scientist, and his team used their technique to examine a new type of nuclear fuel plate being developed for high-performance research reactors. To produce medical isotopes and study how irradiation affects materials, these reactors currently use fuel plates made of HEU, a potential nuclear proliferation risk.

For the past four years, PNNL researchers have been working on a promising HEU replacement: uranium alloyed with molybdenum, which is sometimes referred to as U-Moly. U-Moly is made by melting HEU with depleted uranium and the molybdenum alloying addition. The molten metal is poured into a casting mold, then rolled, heated, and cooled multiple times to make thin plates.

“During casting, one has to make sure that everything melts together nicely,” says Devaraj, who has a long-time interest in studying metals for high-stakes applications. “It’s not just one uniform mixture that’s getting casted—there can be some impurities that cool and settle into different phases. So, if you think of it like baking, there are these nanosized chocolate chips that are different than the overall cookie mixture.”

These impurities are tiny—only hundreds of nanometers to a few microns in diameter and much too small to be seen by an optical microscope. But they could still affect the way the fuel behaves inside the reactor, especially if the collected impurity phases have a very different enrichment than the surrounding fuel material.

Differing enrichment amounts could create hot or cold spots where concentrated or depleted radioactive isotopes make the fuel burn at a different rate. To keep the reactor operating safely, fuel plates need a uniform distribution of the fissionable uranium isotope. If not, the plates could warp, buckle, and eventually fail.

To make sure that the fuel was being processed to get the desired performance, the team needed to be able to verify that an equal amount of enriched uranium was in both the U-Moly matrix, or “cookie,” phase, and the impurity phases.

Traditional methods of analyzing uranium enrichment use samples a thousand times larger than the impurity phases, so any differences between the two phases would be lost.

The team turned to atom probe tomography (APT) for more detail. APT works by pulsing a laser and applying a high voltage to the tip of a needle-shaped specimen to remove one atom at a time. The removed atom flies through a containment field and lands on a detector at the other end. The detector records the atom’s position as it lands and its elemental and isotopic identity. Using this information, scientists can reconstruct the data into 3-D maps showing where each atom is sitting.

APT is used to characterize a wide variety of materials, but a newer, site-specific method was key to getting the right details. Postdoctoral research assistant Liz Kautz used a beam of gallium ions to cut a nanosized wedge through an area that included both the U-Moly matrix and the impurity phase. Kautz then used more gallium ions to mill the wedge into the required needle shape before running the probe.

In the end, Kautz’s hard work paid off: the data and 3-D renderings from the experiment demonstrated both the impurity and U-Moly matrix phases had similar uranium enrichment values.

“That means that everything melted together and formed together. The impurities aren’t retained from the HEU or depleted feedstock materials,” says Devaraj. “That’s good news, because if it wasn’t the same, we’d have a problem.”

Analyzing enrichment through APT helped prove these plates safe for reactors, but this study also shows that the technique could be used to support nuclear forensics investigations.  Other applications could include environmental remediation efforts at the Fukushima and Hanford waste clean-up sites, geochronology studies, or even tracking of illicit nuclear materials.