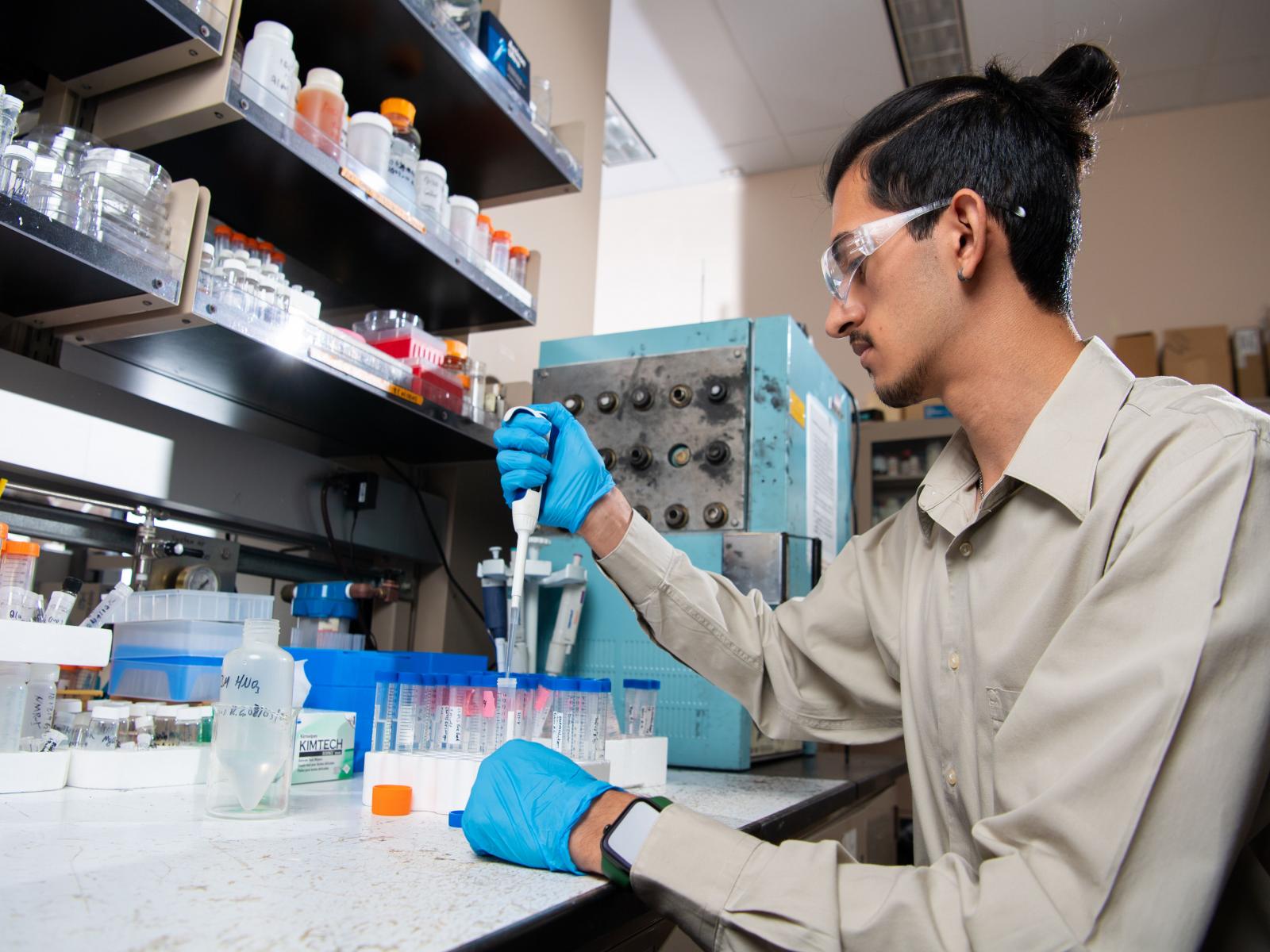 Tobias Rangel Guillen is pursuing a degree in chemical engineering, but during his internship at PNNL, he pursued research related to the behavior of valuable rare earth elements that could inform efforts for recovering them.

When you think about summer jobs for young people, the things that often come to mind are flipping burgers, working at the mall or lifeguarding at the local pool. The interns at the Department of Energy’s Pacific Northwest National Laboratory, however, spend their summers delivering science and technology for the nation.

Take Anthony Romero, for instance, who spends his days working alongside PNNL’s world-leading energy storage experts to understand why batteries degrade over time. A recent Penn State University graduate, Anthony will begin pursuing his PhD in materials science and engineering at the University of Washington this fall. But in between, he is taking a close look at the materials used in lithium-ion batteries and studying how their crystal structure changes during operation.

Using an advanced characterization technique called in-situ X-ray diffraction, Anthony is providing a series of real-time, atomic-scale snapshots for three different battery chemistries’ crystalline structures. The result is like a “stop motion” movie of the structural evolution that takes place during charge and discharge. While Anthony won’t crack the code for the perfect battery in one summer’s time, his work may ultimately lead to better insights into how a battery’s internal structure contributes to its overall degradation.

Another of our interns, Ikumi Ellis, is conducting research that could help change the way single-use medical devices, such as IV drips, syringes and tubing, are sterilized for patient safety. Today, a common sterilization technique for these kinds of devices involves exposure to a radiation source that sends penetrating gamma rays into the product, eliminating any microorganisms. It’s an effective approach, but the radioactive materials used could be dangerous if not handled properly. Further, in the wrong hands, these same materials potentially could be used to create “dirty bombs.”

So, while some classmates are spending their summers poolside, this Arizona State University senior is exploring two safer, but underutilized, sterilization alternatives. The focus of Ikumi’s research is on understanding how sterilization techniques that rely upon x-rays or electron beams affect the different kinds of plastics used in medical devices and their packaging. More specifically, she analyzed plastics after they were treated, conducting tests to identify changes in properties such as melting point, tension, color, hardness and resistance to stresses and strains. Her work directly supports PNNL’s efforts in this area, which have led to interest from a commercial medical device manufacturer.

A third intern, Tobias Rangel Guillen, is a Tri-Cities native and Southridge High School graduate. His interest in STEM (science, technology, engineering, mathematics) was stoked by a classroom visit by a scientist when he was in middle school. Tobias’ internship involves understanding how nanoparticles of certain minerals can embed rare earth elements that are critical in industrial applications ranging from electronics to clean energy and aerospace.

His research will help inform how valuable rare earth elements behave when they are incorporated in certain minerals so that they might be reclaimed from waste streams at mines. There is even the potential for rare earth elements to be recovered from Hanford waste. In that scenario, he is exploring the possibility that specific nanoparticles that form as a result of the interaction between the waste and the aluminum in its container could also contain the elements of interest.

Anthony, Ikumi and Tobias are just three of the 1,200 intelligent and inspiring interns and research associates who are spending time at PNNL this summer. I know their passion for learning and willingness to dive into important research topics will help shape them into future scientific leaders who will pave the way for a brighter tomorrow.