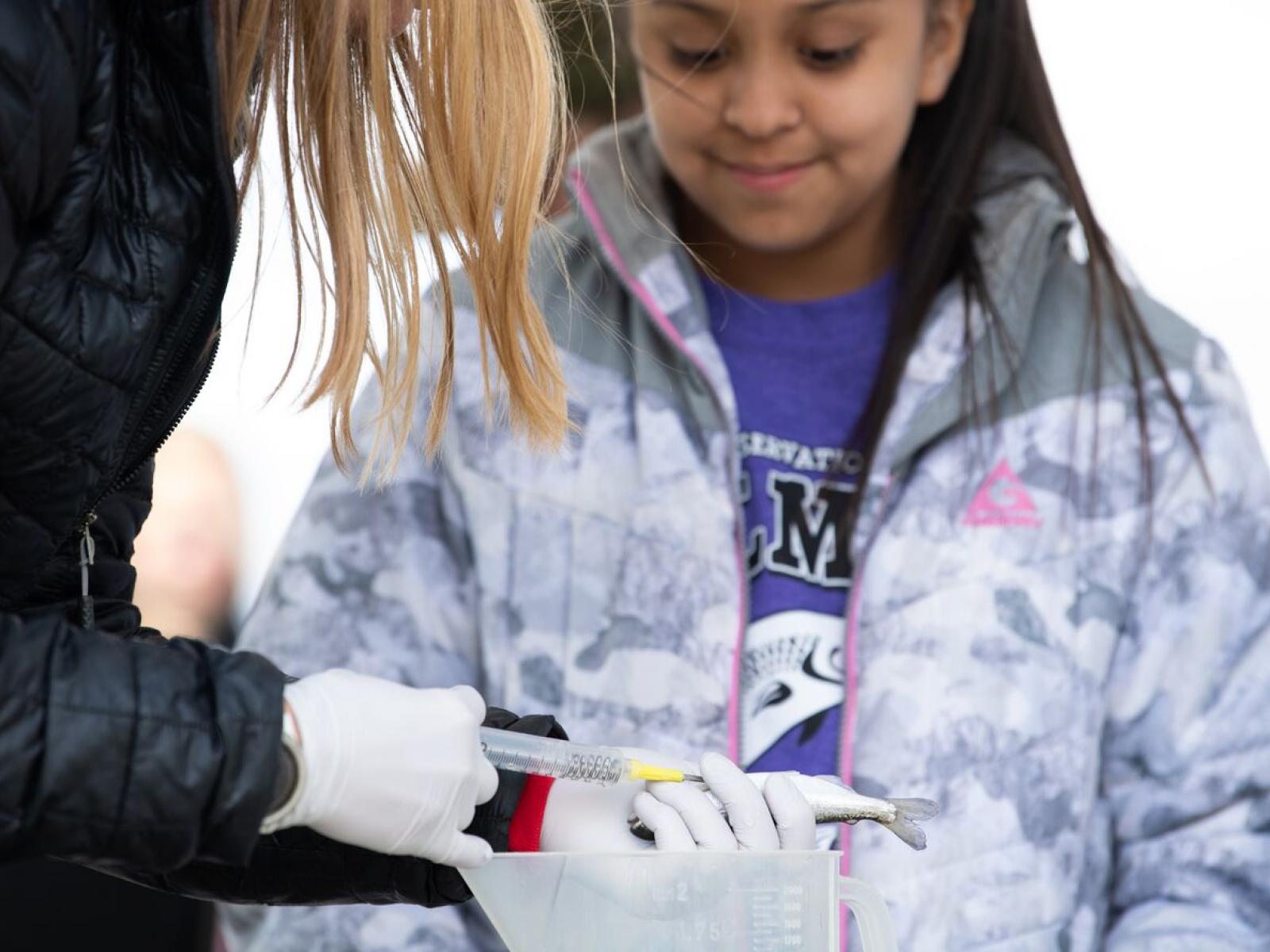 A student looks on as Jill Janak, an Earth scientist at Pacific Northwest National Laboratory, holds a juvenile salmon that was raised at the Aquatic Research Laboratory. Janak and other fish researchers released 500 fish into the Columbia River as part of Salmon Summit, an educational program offering elementary schools an opportunity to learn about the life cycle of salmon.

For the first time since 2019, over 400 students were able to attend the Salmon Summit in person and 3,600 students from 144 classrooms across the state tuned in to the virtual livestream on April 26. Pacific Northwest National Laboratory (PNNL) staff demonstrated the tagging and release of 500 juvenile salmon, raised at PNNL's Aquatic Research Laboratory, into the Columbia River. Students from public and private elementary school classrooms in Richland, Kennewick, Gig Harbor, and Bremerton participated in the event in person or virtually.

Each fish was implanted with a passive tag, known as a PIT tag, that has a unique code that allows researchers to identify fish throughout their life. Certain passage routes at downstream dams have detection equipment to identify fish as they swim by. PNNL is monitoring these detections using a centralized database called PTAGIS and will continue to report on progress.

Within a week of Salmon Summit, four fish were detected at McNary Dam. Two months after the release of the salmon, 60 fish had been detected. Fish can only be detected if they pass through the juvenile bypass systems at the dams. Typically, 5 to 10 percent of fish use these routes, so the other fish that weren't detected likely swam another route on their way to the ocean.

The Benton Conservation District organized the broader Salmon Summit in-person event and supported recruitment of classrooms for the live stream event, and the. Department of Energy's Water Power Technologies Office sponsored PNNL’s PIT tagging station and the live stream event. The City of Kennewick supported this event by allowing access at Columbia Park. Researchers fielded questions about salmon biology and the tagging process, education and careers in biology, Earth sciences, engineering, and science communications. The most popular questions were about predators and what happens when salmon that are tagged are eaten.

Take the lessons even further

Check out the classroom activities aligned with Washington state math learning standards that were developed to compliment the activities demonstrated at Salmon Summit: