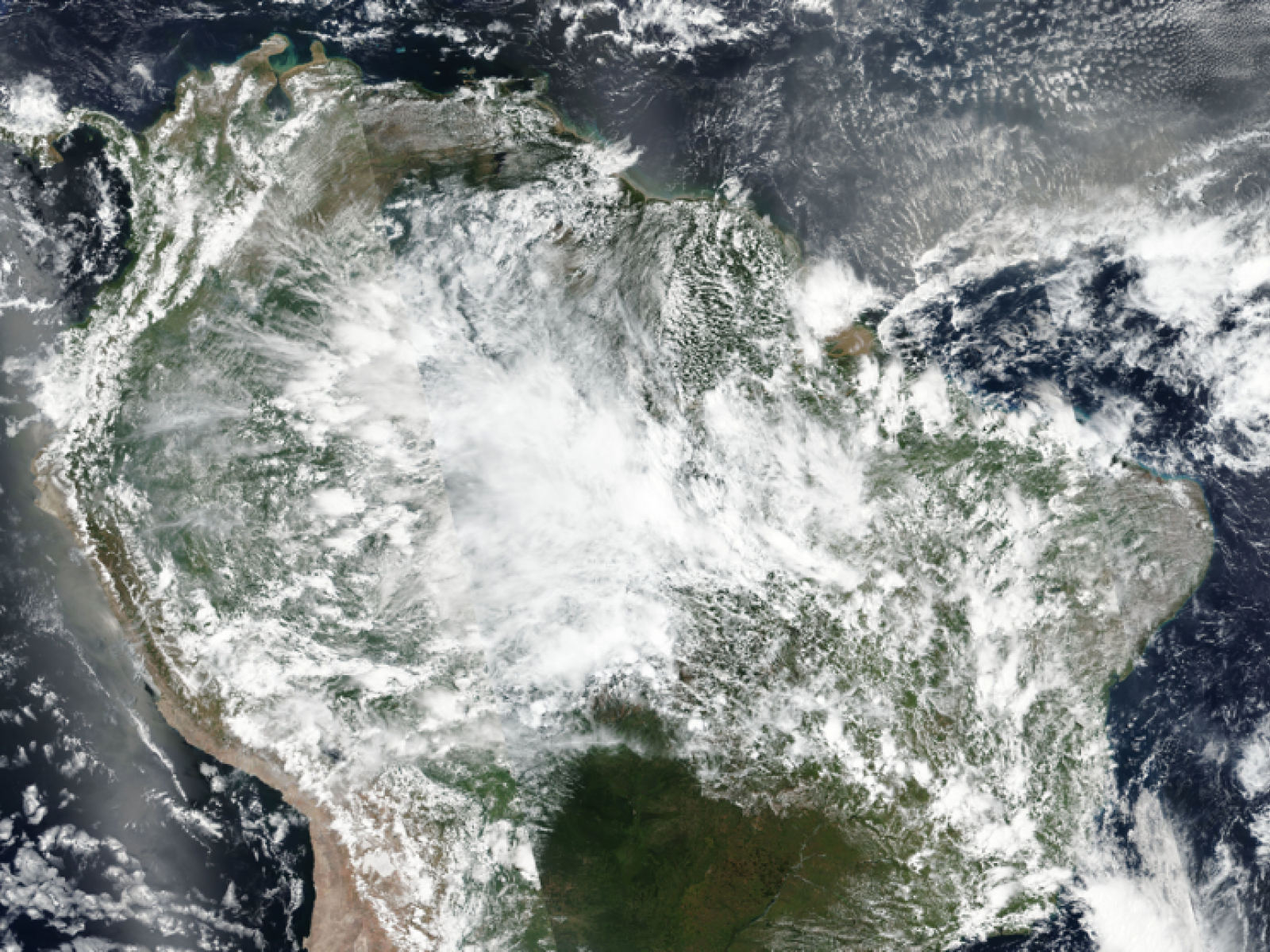 Large-size cloud clusters are common in the Amazon region. The lifecycle of those clouds involves the interplay of many physical processes that may not be fully resolved by current models.

A long-standing issue in climate models is their incorrect rainfall predictions over the Amazon rainforest. The inaccurate distributions of rain and clouds influence other atmospheric processes that may ultimately lead to misjudgments of future regional and global climates. Researchers compared simulations of the climate and cloud-system produced by lower- and higher-resolution models. They found that observation-informed corrections can reduce the model biases that grow over time. By analyzing changes in modeled anomalies in rainfall, wind, temperature, and humidity relevant to large clouds that travel in long distance, they identified that the relatively drier air aloft that is transported from offshore may control how active those clouds can be.

Researchers recreated the evolution of clouds and precipitation with cutting-edge models. Combining simulations with a wide range of atmospheric measurements collected between the ground level and over 10-kilometer height, they identified the primary processes associated with westward-moving precipitating clouds. This enhanced understanding, including the important role in offshore environmental conditions, can help reduce the uncertainty in how models represent clouds, precipitation, and potentially the climate.

The Amazon Basin is one of the land regions with the highest occurrence of large-size and deep cloud systems, also known as mesoscale convective systems (MCSs). The wide coverage and heavy rainfall production of MCSs makes their behavior important to the regional climate and Earth system. However, global climate models are unable to reproduce realistic precipitation in the Amazon, most likely due to poor representation of MCSs. Researchers used various observations, including some collected by the Department of Energy’s Atmospheric Radiation Measurement user facility, from the Central Amazon Basin to gauge how well cloud-system resolving (higher-resolution) and global climate (lower-resolution) models represent the physical processes related to MCSs. The results show that the cloud-system resolving model reproduces the diurnal variation of precipitation in the basin, while the global climate model does not. This likely occurs because the propagating MCSs and related processes can only be simulated in the higher-resolution model. Researchers also found the intrusion of drier air aloft the ocean to inland regions weakens the intensity of MCSs in the Amazon, which may improve our rainfall prediction in the region.

This study is supported by the Department of Energy’s (DOE) Atmospheric System Research program, with observations provided by the Atmospheric Radiation Measurement (ARM) user facility and computational resources provided by EMSL, the Environmental Molecular Science Laboratory, a DOE Office of Science user facility at Pacific Northwest National Laboratory. ARM and EMSL are both sponsored by the Biological and Environmental Research program.