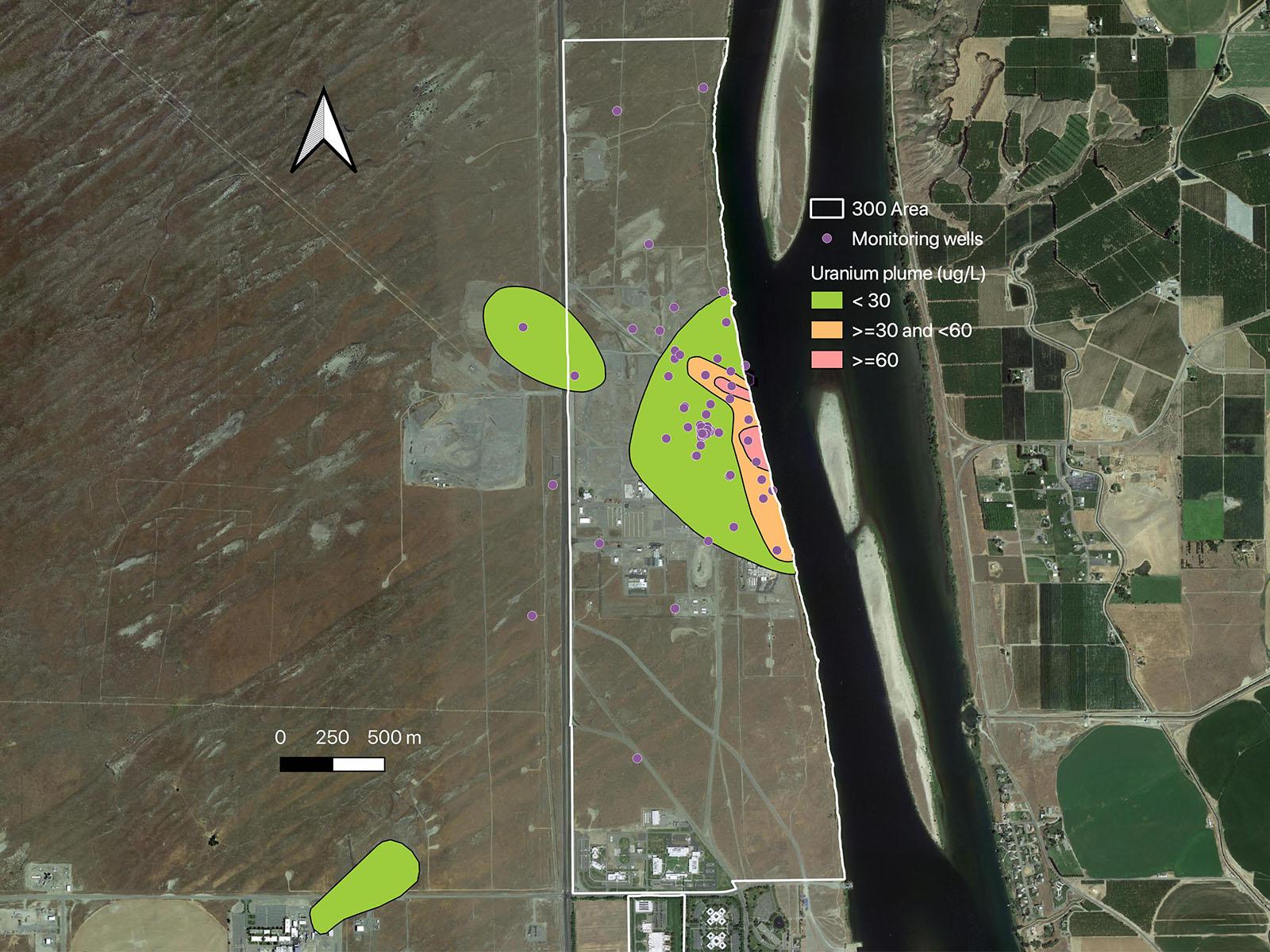 Fiscal year 2010 map shows uranium concentrations measured in groundwater, including the boundaries of a subsurface contaminant plume within the 300 Area of the Hanford Reach.

Natural- and human-induced factors, such as snow melting cycles and upriver dam operations, induce multi-frequency river flow variations on scales ranging from hours to seasons. In addition, the interactions between these river flow temporal variations and aquifer spatial heterogeneity enhance both the spread and mixing of contaminant plumes in river corridors. A team of scientists at the University of Southern California and the U.S. Department of Energy’s Pacific Northwest National Laboratory studied how the interactions between short- and long-term flow fluctuations and spatial heterogeneity in aquifer physical properties affect the transport of dissolved solutes from a groundwater aquifer to the adjacent river. Theoretical modeling of solute transport dynamics and measurements from the Hanford Reach reveal that a plume’s center of mass is largely controlled by fluctuations that happen over longer time periods, while its spreading could be significantly enhanced in the presence of physical heterogeneity within the river corridor.

Information about how multi-frequency variation in river flow affects the transport of dissolved chemicals is relevant to risk analysis and remediation of contaminated sites. These results suggest that high-frequency river fluctuations may have little impact on how contaminants that are distant from the shoreline migrate. This may partially explain why contaminants persist in river corridors that have highly dynamic fluctuations in the river water levels.

The results also potentially suggest that significant spreading of contamination plumes is caused by the interaction between flow variation and heterogeneity within the river corridor in highly permeability aquifers, such as at the Hanford site. Therefore, solute and thermal mixing might be highly underestimated when using large scale models with homogeneous assumptions. Understanding the impact of high-frequency fluctuations relative to low-frequency fluctuations can provide insights on what sampling frequency or numerical time step may be employed in order to better allocate both site characterization efforts and modeling studies.

In this work, a team of scientists investigated how these variations interact with aquifer heterogeneity and affect a plume of dissolved contaminants moving into a river. To do this, they analyzed a simplified flow field composed of horizontal and longitudinal components with two different sets of characteristic frequencies of variations. Then the scientists compared the changes in the mass of the plume center and how it spreads over time by sequentially removing variations of sub-weekly, weekly, and monthly frequencies. Their results indicated that the center of mass of the plume is mainly controlled by low-frequency fluctuations of the flow field that are driven by seasonal variation in river stages, while the impacts of higher-frequency flow variations on plume spreading are more complex.

This research was supported by the U.S. Department of Energy (DOE), Office of Science, Biological and Environmental Research program, as part of the Environmental System Science program. This contribution originates from the River Corridor Hydrobiogeochemistry Scientific Focus Area at the Pacific Northwest National Laboratory. This research used resources of the National Energy Research Scientific Computing Center, a DOE Office of Science user facility.