The dose-response paradigm for the fields of pharmacology and toxicology are predicated on the principle that response is proportional to the concentration of the effector molecule at the site of action. The use of target tissue dose, rather than less specific measures of “dose” such as exposure or administered dose, improves correlations between dose and response for drugs, chemicals, and inhaled gases and particles.

The dynamics of particles in liquids are well studied and mathematical approaches for describing both diffusion and gravitational settling have been developed. 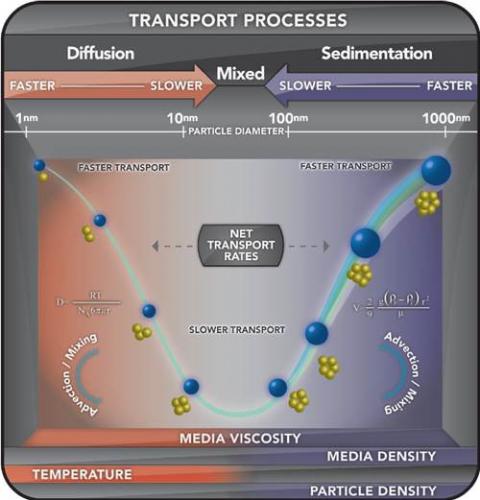 These approaches were used to develop a method for describing the particokinetics–the combined influence of diffusion and gravitational settling—on particle transport to cells in vitro. The In Vitro Sedimentation, Diffusion and Dosimetry (ISDD) model is a computational model of particokinetics (sedimentation, diffusion) and dosimetry for noninteracting spherical particles and their agglomerates in cell culture systems common to toxicology. The model is developed from first principles–Stokes sedimentation and Stokes-Einstein diffusion–and verified against experimentally measured rates of nano- and microparticle transport across several particles sizes, and densities as well as agglomerates.  ISDD is an in vitro counterpart to the Multipath Particle Deposition Model (MPPD) for inhaled particles and can be used with MPPD to related in vitro doses to cellular doses of inhaled particles.

Applied in conjunction with in vivo dosimetry models such as the Multipath Particle Deposition Model (MPPD), ISDD can be used as the initial step in translating cellular doses of nanoparticles between in vitro and in vivo systems (Teeguarden et al., 2014).  This application area can grow as models of systemic particokinetics emerge.

Mahnama, A., G. Ghorbaniasl, S.M. Allaei, and A. Nourbakhsh, Semi-analytical solution for the in-vitro sedimentation, diffusion and dosimetry model: surveying the impact of the Peclet number. Colloids Surf B Biointerfaces, 2014. 122: p. 324-31.