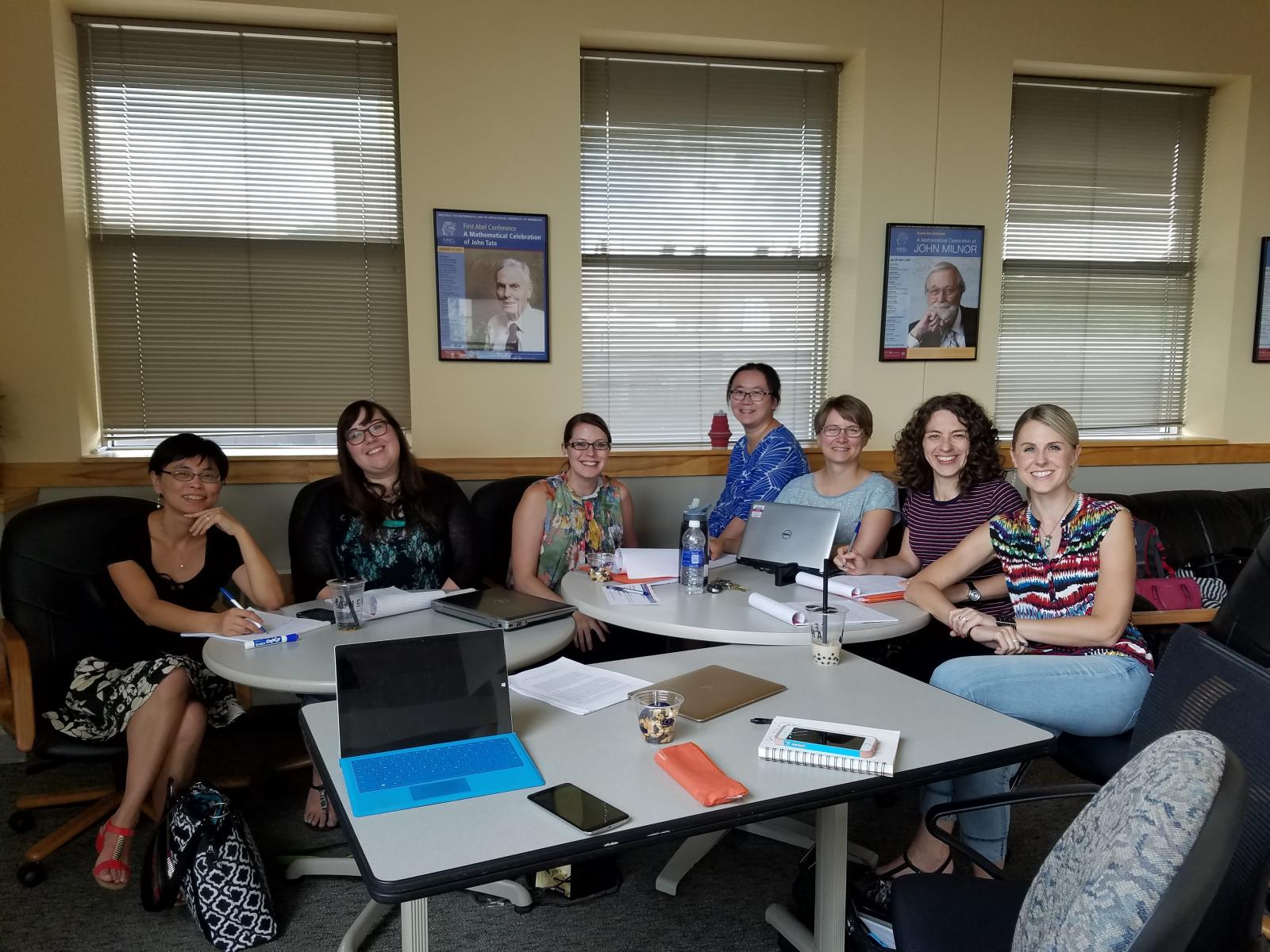 The team's first meeting at the Women in Computational Topology workshop through the Institute for Mathematics and it's Applications. Left to right is Yusu Wang, Maria Gommel, Lori Ziegelmeier, Bei Wang, Emilie Purvine, Radmila Sazdanovic, and Ellen Gasparovic.

A group of female mathematicians and computer scientists, which includes PNNL’s Emilie Purvine, has published its third paper on joint research to understand and accurately represent object relationships through metric graphs.

The researchers first met in 2016 as part of the Institute for Mathematics and its Applications (IMA) Women in Computational Topology workshop at the University of Minnesota. The initial week spent “in front of a whiteboard kicking ideas around” has grown into a lasting and fruitful collaboration, with more work to come.

“It’s somewhat rare to have such a big group persist over such a long time,” says Purvine, who is the only team member to come from a national laboratory and not a university. “Pairs and other smaller groups are very common, but to have seven researchers over four time zones is not as common.”

The group stays in touch with an hour together on google hangouts each week. These Friday meetings spark ideas and create a regular time for the women to convene and talk about their proofs to check or add and remove as needed.

They also seek opportunities to meet in person. The women applied for and received funding through the American Institute of Mathematics’ Structured Quartet Research Ensembles (SQuaREs) program for three more meetings and came together again for a second IMA workshop. Other applications have been submitted for another SQuaREs residency and for time together at the Institute for Computation and Experimental Research in Mathematics at Brown University.

In addition to its high caliber of research, the group’s friendliness is part of its success. “It’s really fun,” says Purvine. “We each feel comfortable bringing our different strengths, and we ask for references and explain details when someone doesn’t understand. None of us feels like we need to nod along and then look things up later.”

Available now, the group’s most recent paper presents fundamental mathematical proofs that show a consistent size relationship between a simple and complex graph comparison method when at least one of the graphs is what is known as a “bouquet graph.” The simpler comparison method always results in a smaller value than the more complex method.

Purvine’s work on graphs at PNNL applies to areas including cybersecurity, computational biology, knowledge systems, and information integration. Other researchers include Ellen Gasparovic from Union College, Maria Gommel a recent Ph.D. graduate from the University of Iowa, Radmila Sazdanovic from North Carolina State University, Bei Wang from University of Utah, Yusu Wang of The Ohio State University, and Lori Ziegelmeier of Macalester College. One of the group’s publications was co-authored with Michal Adamaszek and Henry Adams.