Why Size Matters for Gold as a Catalyst 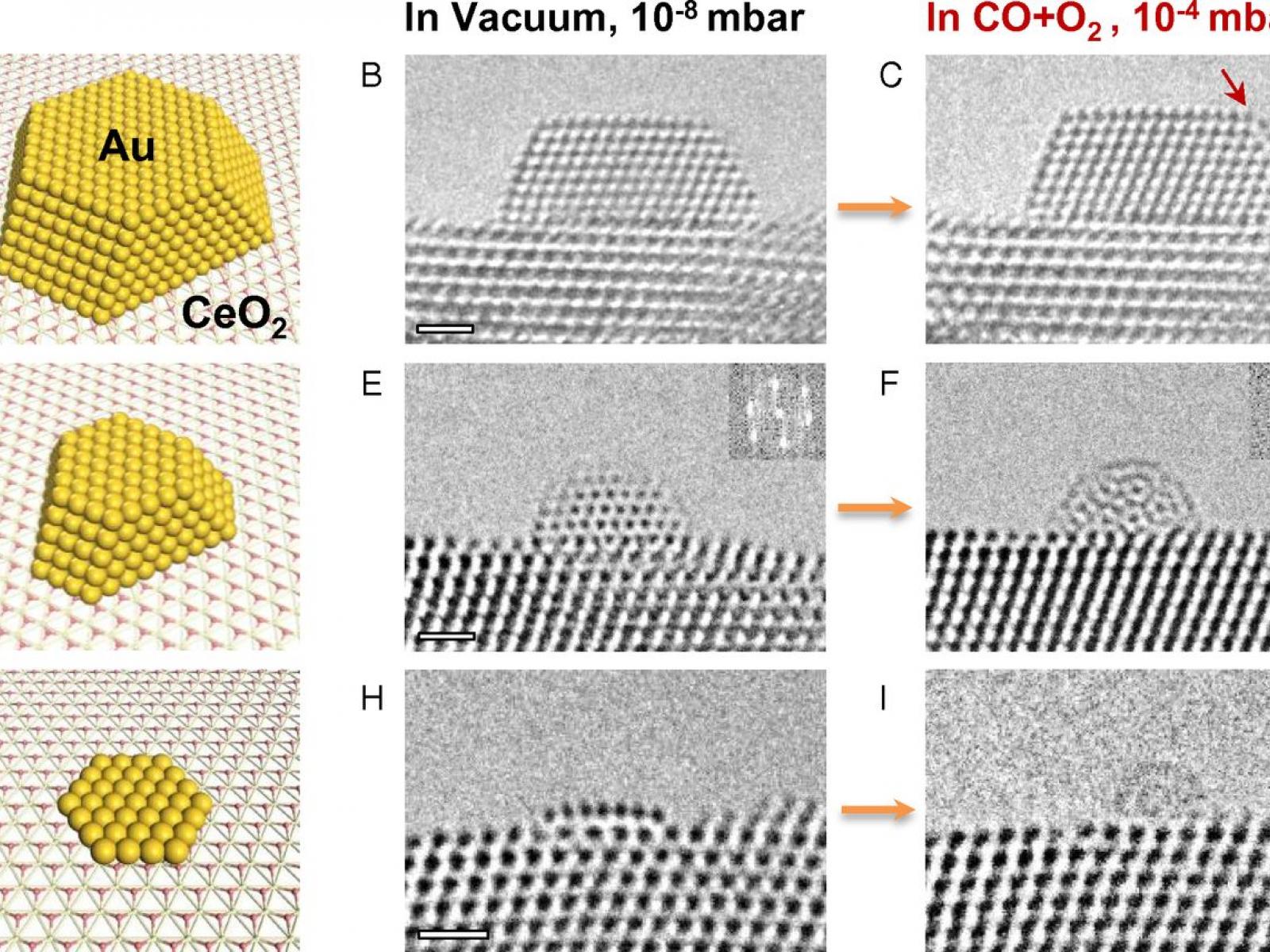 Gold is the noblest metal—the most resistant to oxidation. However, nano-size gold has a unique ability to perform as a catalyst, even at low temperatures. The underlying mechanism for this size-dependent change in properties has puzzled scientists since the phenomenon was discovered in the late 1980s.

A team of researchers, including Yingge Du, Chongmin Wang, and Jun Li of Pacific Northwest National Laboratory, set out to address this question using state-of-the-art aberration-corrected environmental transmission electron microscopy. Their work has revealed new insights about the exceptional catalytic properties of ultrasmall gold particles when they are exposed to reactant gas. Details of their findings have been published in a Proceedings of the National Academy of Sciences paper titled “Size-dependent dynamic structures of supported gold nanoparticles in CO oxidation reaction condition.”

Why it matters: In situ studies of ultrasmall gold clusters in a reactive environment have been lacking, making it difficult to verify the origin of the size effect in catalysis. This study used in situtransmission electron microscopy to reveal that gold nanoparticles, when isolated down to a critical size, undergo dynamic structural changes under the catalytic working conditions, and all gold atoms in a cluster can be activated to promote the catalytic reactions. Evidence of the transformation at this ultrasmall scale can only be obtained through in situ and operandocharacterization.

This finding challenges the classic thinking that gold as a catalyst retains the same structure between static and catalytic conditions. In fact, these otherwise stable ultrasmall gold clusters can transform to a metastable phase. The results also suggest that the nanocatalysts may work as dynamically generated single-atom catalysts, a concept that has aroused remarkable recent interest in the catalysis community.

Summary: Ultrasmall gold clusters supported on single crystalline ceria [CeO2(111)] thin films were exposed to reactant carbon monoxide and oxygen (CO + O2) gas using in situ environmental electron microscopy combined with computational modeling and ab initio molecular-dynamics simulations. The researchers observed different structural responses to the reactant gas depending on the size of the nanoparticle. In its ultrasmall (tens of atoms) form, a gold nanoparticle displayed dynamic structural changes under the catalytic working condition; the intrinsic structure was lost and the clusters became disordered, while dynamic low-coordinated atoms formed at the surface. The ab initio molecular-dynamics simulations confirmed these observations and further revealed that the generation of dynamic low-coordinated atoms via gold-carbonyl species could act as dynamic active centers for CO oxidation.

For slightly larger nanoparticles (up to a few hundred atoms), the otherwise stable face-centered cubic structure transformed to a disordered structure under CO and O2 exposure, which became liquid-like and simultaneously formed low-coordinated gold atoms.

In contrast, the larger nanoparticles maintained their structure while undergoing localized surface reconstructions.

The size-dependent structural response to reactant gas, especially generation of dynamic low-coordinated Au atoms in ultrasmall gold particles, can effectively boost the reaction through facile transport of the CO to reaction sites, hence delineating a root cause for why small size matters for gold catalysis and why larger gold nanoparticles tend to become inert.

What's next? The team believes more work should be done to explore how the gold nanoparticles transform from their ordered structure to a disordered structure, and to understand whether this size effect also exists in other catalytic systems. They are seeking additional funding and resources to support expanded research in this area.