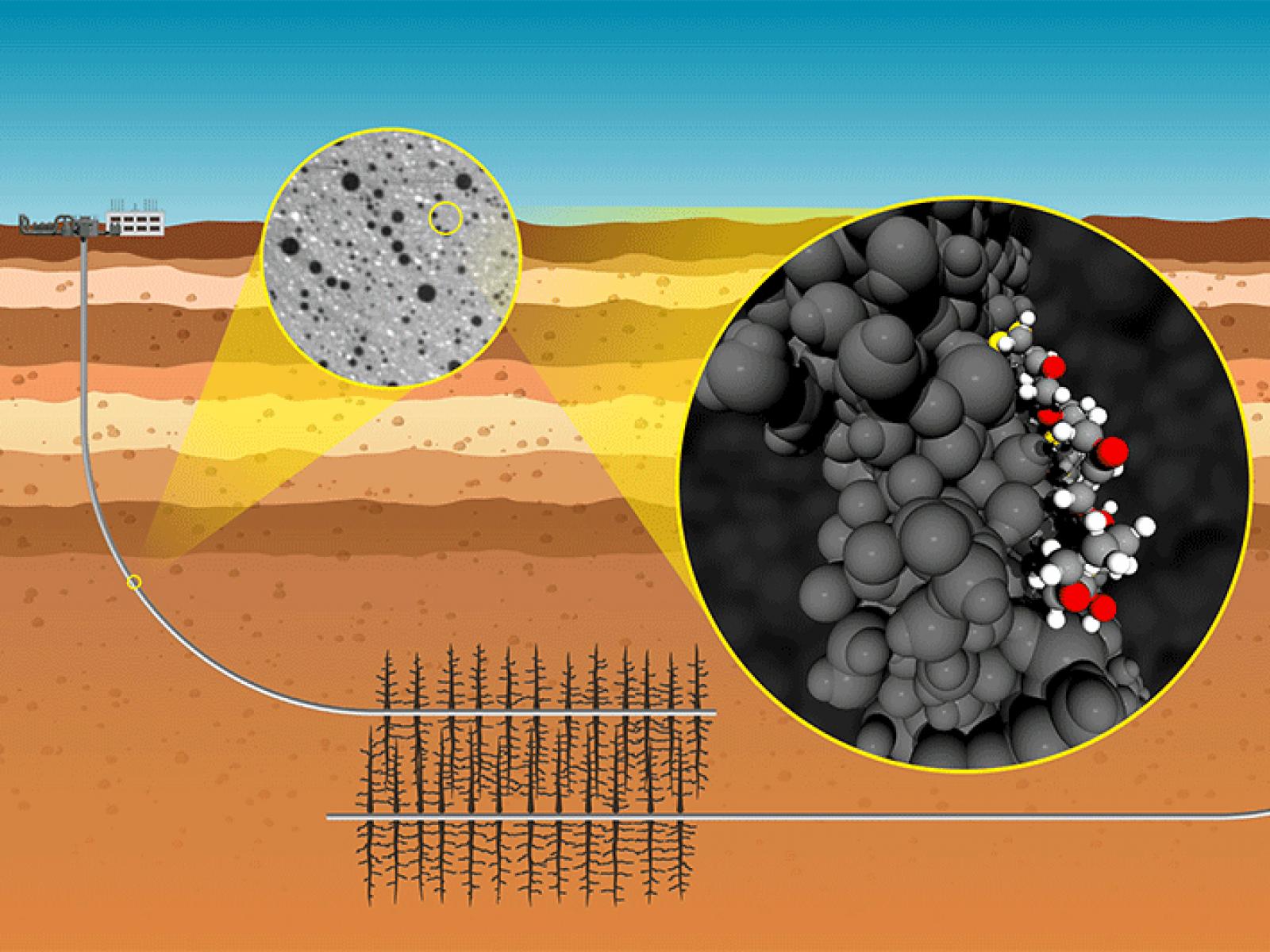 An illustration showing the self-healing cement at a molecular level.

Researchers at Pacific Northwest National Laboratory (PNNL) have developed a self-healing cement that could repair itself in as little as a few hours. Wellbore cement for geothermal applications has a life-span of only 30 to 40 years. When the cement inevitably cracks, repairs can easily top $1.5 million dollars per well. Scientists are developing cement that fixes itself, sidestepping enormously expensive repairs. The cement is suitable for both geothermal and oil and gas applications. With thousands of subsurface energy development wells annually, this technology can have a dramatic impact on the cost of energy production.

"Manh did a masterful job teasing out all this information from the trajectories. The fine details of these computations and analyses are not for the faint of heart."

It Works. But How? PNNL chemist Carlos Fernandez and his team developed their self-healing cement, and they knew it worked thanks to countless tests in the laboratory. But they did not entirely understand how the cement behaved at the molecular level. They wanted to understand what drives the healing ability of these composites, and more specifically they wanted to know the role of sulfur atoms in the polymer. This information would illuminate potential weaknesses in the cement/polymer composite and how to modify the formula to improve durability.

Bringing in the Big Simulations. Computer simulations by default are tuned to look at molecular-level interactions. So, Fernandez pulled in the expertise of PNNL computational scientist Vassiliki-Alexandra Glezakou to help. The computational team consisting of Glezakou, Manh-Thuong Nguyen, and Roger Rousseau constructed a simulation model that is the first of its kind. Based on density functional theory, the model can simulate what occurs inside the cement/polymer system. This computational approach goes much further than classical molecular dynamics models that normally cannot track how bonds break and form inside cement. As a result, the team built a model complex enough to represent all the salient features of the cement/polymer interface both in a slurry and in a cured state.

The result was surprising and went against the team’s initial assumptions. The simulations showed that the polymer sulfur atoms do not bind on the cement, but instead point away. This is important because if the sulfur atoms were responsible for the cement’s self-healing abilities, like the team previously thought, binding on the cement would hinder this action. Unexpectedly, the main interaction responsible for the adhesion of self-healing cement is the bonding between alkoxide functionalities in the polymer and calcium atoms in the cement. In addition, a large number of hydrogen-bonding interactions, shown to exist over a large range of interatomic interactions, were found to contribute to the reversible binding because they can be as easily broken as they are formed.

Taking a Look Inside to Validate the Model. Inspired by these findings, the team set out to investigate further using Environmental Molecular Sciences Laboratory

unique imaging capabilities. Sum frequency generation spectroscopy is a tool sensitive to interactions at the interface between the polymer and cement, but also between the polymer and air. This detailed technique isolated the alkoxide-calcium interaction at the cement-polymer interface and validate their role in the healing function of these novel composite materials. This experiment also confirmed the absence of any atomic interactions involving the sulfur atoms in the polymer, further validating the theoretical predictions.

“Honestly, these were rather unprecedented simulations, not just in terms of computational demands, but especially for creating a molecular model that can provide a reasonable representation of such a complex system,” said Glezakou.

“Manh did a masterful job teasing out all this information from the trajectories. The fine details of these computations and analyses are not for the faint of heart,” agreed Rousseau.

All of this together helped explain how the self-healing cement works, and showed that the cement may perform better than originally thought. It also gives the team a better understanding of how and why the materials behave the way they do and may reveal ways to modify and potentially improve it further.

Sponsor: This work was funded by the DOE’s Geothermal Technologies Office

Atomic Origins of the Self-Healing Function in Cement–Polymer Composites