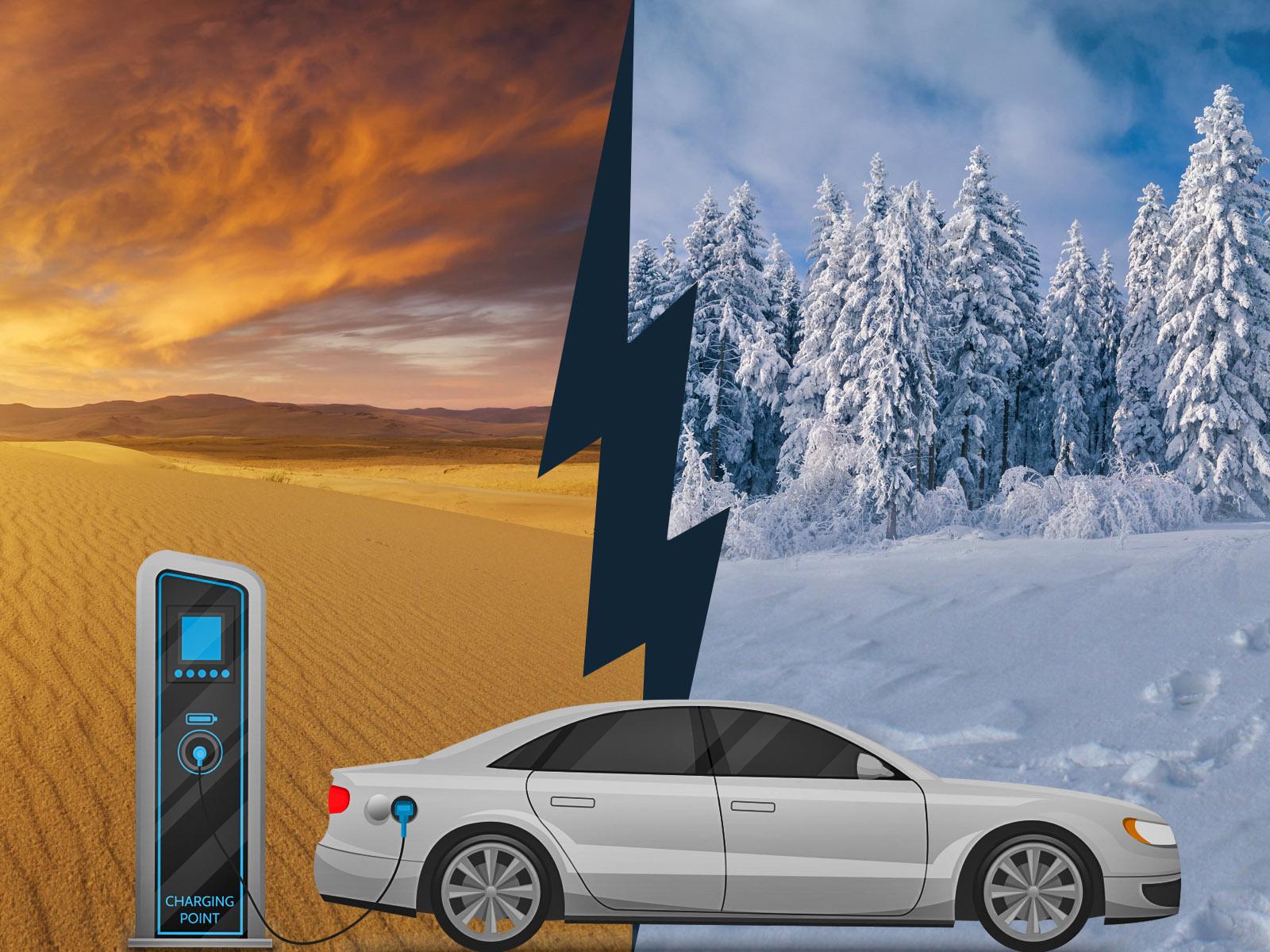 PNNL researchers are creating new electrolyte mixtures to improve the performance of lithium-ion batteries, such as those that power electric vehicles, in very cold or very hot weather.

PNNL scientists have created a chemical cocktail that could help electric cars power their way through the extreme temperatures that degrade the efficiency of current lithium-ion batteries.

Wu Xu and colleagues have demonstrated combinations of compounds in electrolytes that, in the laboratory, allow lithium-ion batteries to function very well both in sub-zero temperatures (Fahrenheit), which are reached often during the winter in the northern United States and other parts of the world, and in very hot temperatures like those in the summer in Phoenix, Ariz. Those are temperatures where today’s batteries, used to power electric cars, cell phones, laptops, and other devices, often retain little charge and expend it quickly.

The compounds the team developed are found in a battery’s electrolyte, the liquid material that bathes the electrodes and plays a critical role shuttling around the lithium ions that make the battery work. The fluid has several important functions and is typically a mix of well-known compounds, such as lithium hexafluorophosphate as the conducting salt, organic carbonates as the solvent, and closely held additives that boost performance.

But several constraints limit the ability of lithium-ion batteries to power vehicles and other devices in very cold or hot environments. For batteries of limited size and in varied and demanding environments – such as those that power cars – the demands on the electrolyte are steep.

In a recent article in ACS Applied Materials & Interfaces, Xu’s team demonstrated electrolytes that were viable at much lower temperatures than current materials.

The protective power of an electrolyte

Their work focused on creating a mix that kept other important parts of the battery, the anode and cathode, functioning as efficiently as possible while allowing the electrolyte to continue doing its job. That job includes shuttling ions to their destinations efficiently and keeping wayward ions from going where they shouldn’t.

“It’s a little bit like how lamination protects a photograph,” said Xu. “You want a very thin but very strong layer that prevents damage to what lies beneath.”

Benefits of additives add up

So Xu and team tested several combinations of additives and found a few that combine the best features: protecting a battery’s key elements, keeping the protective layers around the electrodes thin but strong, operating over a wide range of temperatures, and doing so over many cycles.

Among the additives the team found that were effective when used in combination with others:

“The key here is the synergistic effect we demonstrated when additives are used in particular combinations,” said Xu.

He added: “We need to widen the temperature stability window so that batteries like the ones in electric cars are effective everywhere – from Phoenix on the warmest day of the year to Minneapolis on the coldest."

The work is sponsored by DOE’s Office of Energy Efficiency and Renewable Energy through the Technology Commercialization Fund Program. The microscopy and spectroscopy measurements were done at EMSL, the Environmental Molecular Sciences Laboratory, a DOE Office of Science user facility located at PNNL.