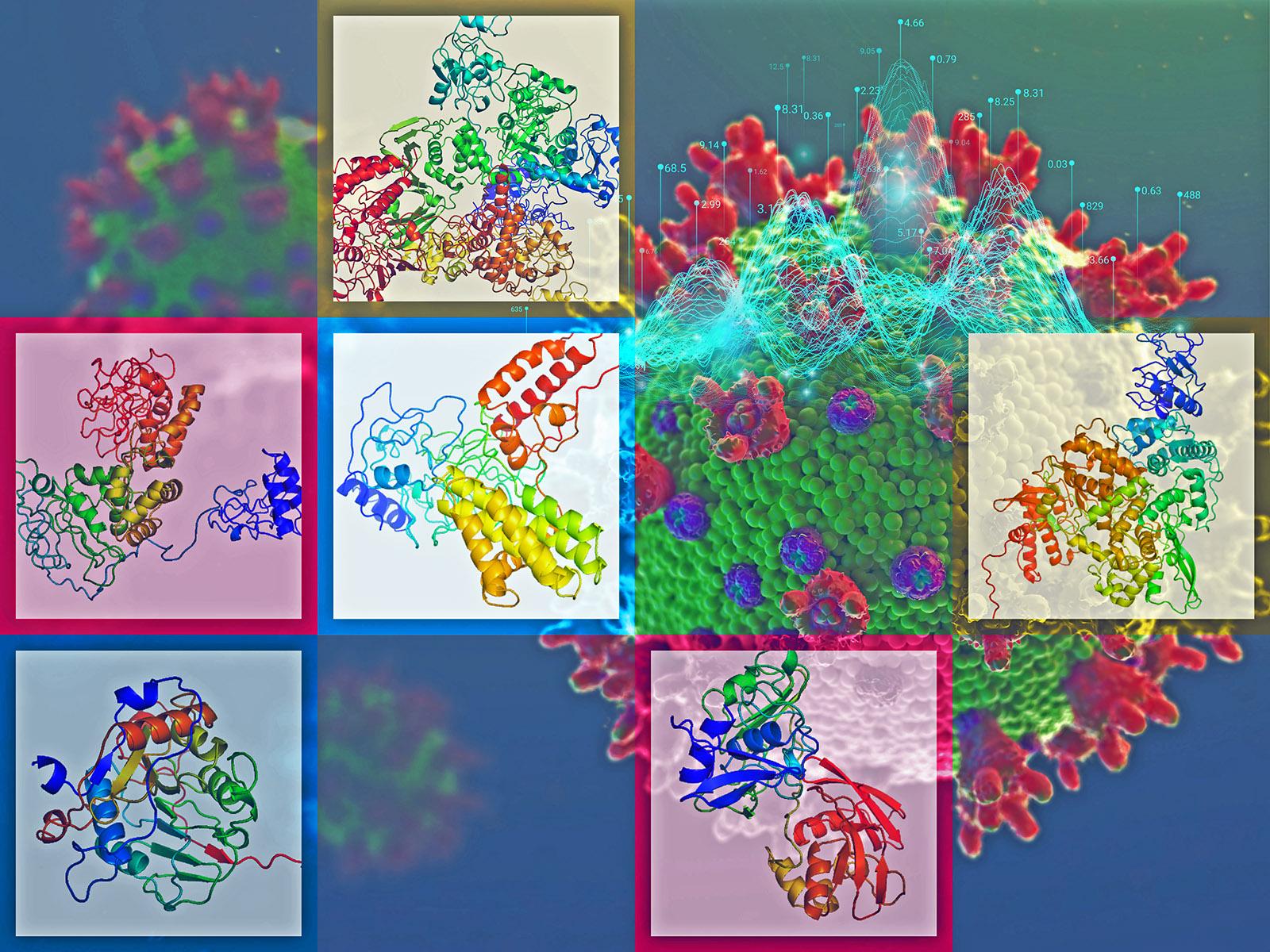 Composite illustration featuring a rendering of the novel coronavirus, with the club-shaped glycoprotein spikes which give such viruses a crownlike, or coronal, appearance. The overlay of protein structures in the square insets are structure models of mature peptides in the SARS-CoV-2 genome.

Each protein is part of the molecular toolkit that the virus uses to infect, replicate, and spread.

That presents scientists with 27 targets – 27 potential opportunities to stop the virus.

Even before the word “coronavirus” inserted itself into the nation’s vernacular, a nationwide network of scientists jumped into the effort to start revealing those structures – structures that hold the keys to a vaccine or treatment.

Garry Buchko is part of the endeavor. A PNNL scientist in Richland, Buchko collaborates with scientists at the Seattle Structural Genomics Center for Infectious Disease (SSGCID) to look for any sign of weakness that scientists can use to muck up the virus’s inner workings. Creating atomic-level pictures of the protein structures in the viral toolkit is a crucial first step.

A track record against infectious disease

The team has a powerful track record. In the 13 years since its creation, SSGCID has solved the structures of close to 1,300 proteins from over 70 organisms that cause human death and disease. The group has brought discovery to bear on diseases like tuberculosis, plague, Ebola and the flu. The structures help scientists develop better treatments or vaccines against a host of nasty agents that can cause ills ranging from fatigue and food poisoning to difficulty breathing, and sometimes even death.

“We work on well-known infectious disease organisms like malaria and tuberculosis, but we are also tackling lesser-known infectious agents as well. You never know what might become the next threat,” Buchko said.

Now, Buchko and his SSGCID collaborators are looking carefully at the coronavirus proteins. Scientists get a lock on many proteins by using X-ray crystallography, which yields an extraordinary snapshot at the atomic level, but some proteins resist the process. That’s where Buchko comes in, tackling some of the toughest proteins using nuclear magnetic resonance (NMR) spectroscopy – a cousin to magnetic resonance imaging used widely in medicine.

"A load of 27 different proteins is fairly large for a virus," said Buchko. “We need to understand the role that each one plays in allowing the virus to hijack human host cells to replicate.”

A unique role for NMR in coronavirus research

From there, other scientists at SSGCID solve the bulk of the protein structures using X-rays, while Buchko turns his focus to the subset that resists crystallizing by using NMR. NMR has an added advantage: It allows scientists to watch a protein in action in a way other methods do not.

To do so, Buchko inserts a small glass tube containing the dissolved protein, itself just one ten-thousandth the width of a human hair, into a machine four times the weight of an Asian elephant. He does the protein prep work late at night, when laboratory staffing is minimal and social distancing is easy.

Then he heads home and, remotely, manipulates the experiments happening inside the NMR located in the Environmental Molecular Sciences Laboratory, a U.S. Department of Energy Office of Science user facility at PNNL. The protein in the spectrometer is surrounded by a very strong magnetic field, thousands of times stronger than the typical MRI, and then pumped with additional radiofrequency energy to watch how individual atomic nuclei respond.

In this way, he can look in incredible detail at not just a single protein but at tiny segments – for instance, specific amino acids in precise locations. Indeed, scientists can monitor the environment of almost every carbon, nitrogen, and hydrogen atom in the protein.

Ultimately, after weeks of data collection, Buchko is left with thousands of pieces of data. He feeds that into a computer program to calculate the position of every single atom, resulting in a complete 3D reconstruction of the protein. That’s crucial information for scientists around the globe who are working on ways to stop the virus, supplying them with a how-to guide to identify viral vulnerabilities.

“In our current work, our hope is that others can use our findings as blueprints for drug design. Perhaps they will be able to pluck out a specific site on the protein for targeting that will weaken the virus’s virulence,” said Buchko, who has a joint appointment at Washington State University’s School of Molecular Biosciences.

His findings, like those of his SSGCID counterparts, will be deposited in a bank – the Protein Data Bank, a public database of protein structures that the group shares with the scientific community so that scientists worldwide can exploit the team’s findings to make further discoveries.

Ready to meet the coronavirus challenge

Immediately when the coronavirus threat became known in January, the SSGCID team switched its work to focus on the problem. The SSGCID is a consortium funded in whole or in part with federal funds from the National Institute of Allergy and Infectious Diseases, National Institutes of Health, Department of Health and Human Services, under contract no. HHSN272201700059C.

It seemed a natural shift, since the team, headed by Peter Myler of the Seattle Children’s Research Institute, is funded to learn more about important infectious diseases. Within just a few weeks, participants at the University of Washington had solved the structure of the virus’s spike protein, which allows the virus to bind to cells inside our lungs.

“This shows the value of basic research,” Buchko said. “It’s because we look at these fundamental questions constantly that we had everything in place to address key questions related to this coronavirus. Our colleagues were able to solve the structure of the spike protein so quickly because we had people in place, ready to work together and act very rapidly.

“In research, you never know what will lead to the ‘ah-ha’ moment. You never know what will become topical. Fifteen years ago, I determined structures of proteins that no one gave a hoot about, but every now and then I get calls from people very interested in some of these protein structures. What we do now increases the odds of someone else solving both current problems but also problems of which we’re not yet aware.”