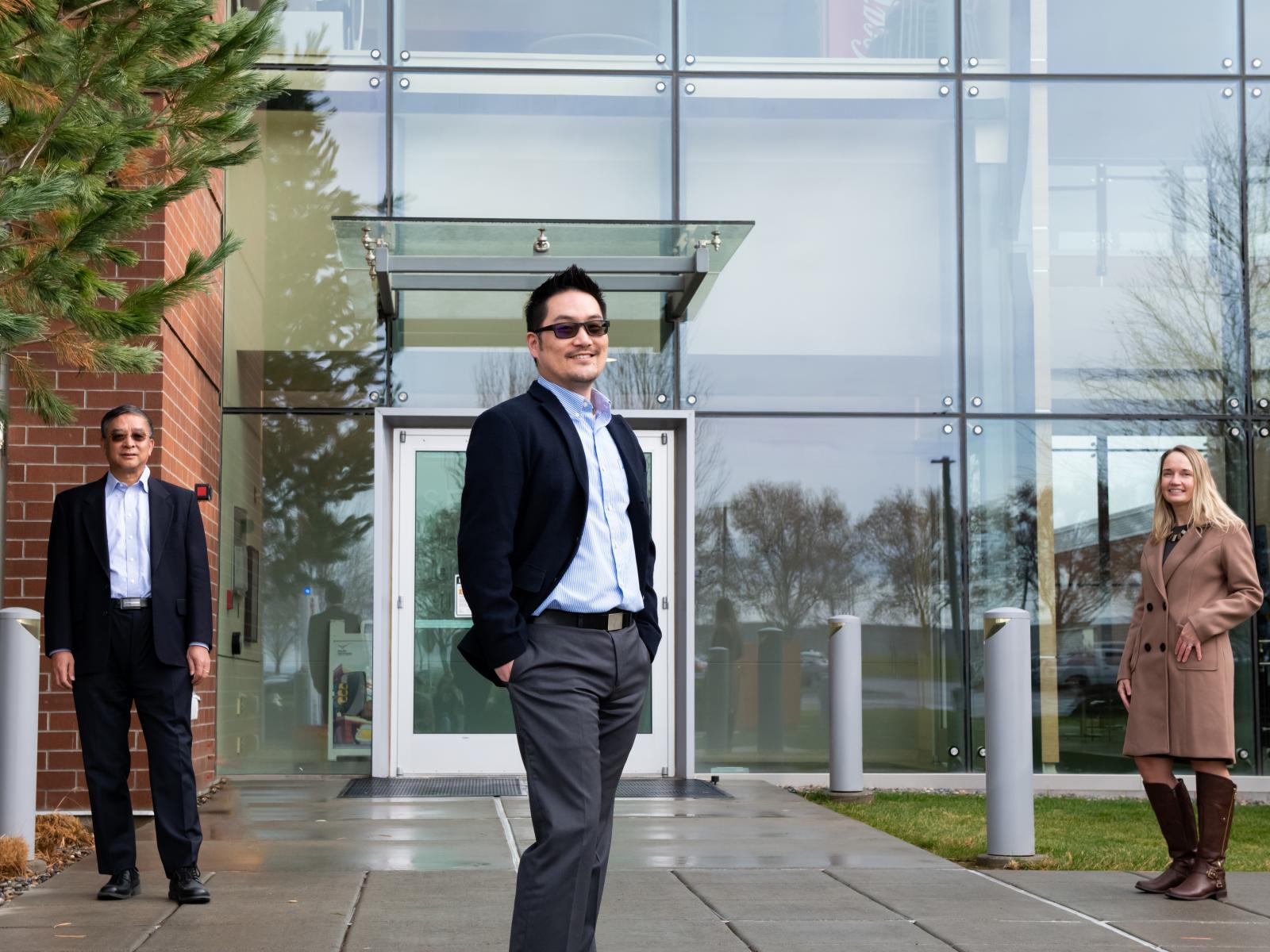 RICHLAND, Wash.—A device that identifies fluids by “reading” their acoustic signatures and an international partnership that brought greater stability to Central America’s power grid mark just two of the latest successes in transferring federal technology to private industry. The Federal Laboratory Consortium for Technology Transfer recognized staff behind these and one additional innovation last week with awards that distinguish exceptional work in commercializing government technology.

Each winning technology answers a unique need. FluID™, a cost-saving device that reveals the identity of fluids enclosed in metal containers, delivers in mere moments details that once took weeks to acquire. A six-year project between U.S. and Central American agencies shored up Central America’s grid through technical training and putting valuable software into the hands of grid operators, among other efforts. And a novel licensing program demonstrates how licensing revenue can be used to grant private companies a simpler way to “test drive” federal technology.

The Department of Energy’s Pacific Northwest National Laboratory has received more FLC awards than any other national laboratory, now totaling 98 awards since the FLC initiated its award program. The 2021 winners will be recognized at the virtual FLC National Meeting, held Wednesday, April 7.

Central America’s regional electricity grid is now more robust and reliable, thanks to a partnership between PNNL, the U.S. Department of State, the Bureau of Energy Resources’ Power Sector Program, and the Central American regional system operator Ente Operador Regional, based in El Salvador. Over 30 PNNL researchers participated in a six-year program aimed at improving economic opportunity for Central American residents and shoring up the stability of a power grid that serves over 10 million customers throughout Guatemala, El Salvador, Honduras, Nicaragua, Costa Rica, and Panama.

Though EOR’s regional power system was designed to transfer 300 megawatts between countries, the typical amount transferred was roughly a quarter of that load. Operators often relied on costly diesel fuel to offset grid instability. To optimize power transfer and lower system costs, the U.S. Department of State tapped PNNL for technical expertise.

From 2013 to 2019, PNNL research engineers, the State Department, EOR engineers, and representatives from all six countries collaborated on multiple projects. Their efforts spanned analysis of grid stability, expanding the reach of transmission, and resource integration, among other areas. PNNL engineers held training sessions and tailored seven software tools for EOR grid operators to monitor and analyze system stability.

PNNL granted a nonexclusive, royalty-free license to EOR to use grid tools that were otherwise not open-access, then extended the same software to member nations who requested access, shortening a typically months-long transfer process to just two weeks. The collaboration produced another promising partnership: PNNL and the State Department are now working on a similar joint effort in Southeast Asia.

For their work, the FLC recognized the team by bestowing the Interagency Partnership Award, acknowledging staff who collaborated across agencies to accomplish “outstanding work” in transferring technology.

Billions of dollars are lost in the oil and gas industry when pipelines and holding containers are taken offline for testing and inspection. Enter FluID™, a simple, non-invasive device that can identify liquids without ever peering inside the metal containers that house them. The new technology emits acoustic pulses and analyzes the return echoes of the fluids inside, reading compound-specific signatures that reveal the identity of the enclosed contents. Whether applied to a travel-size shampoo bottle or a tanker truck, FluID™ boasts high accuracy: in a test of 18,100 total readings of more than 1,800 different liquids, FluID™ had an accuracy rating of 99.86 percent.

The technology is available through a partnership between PNNL and Perceptive Sensor Technologies, a private company based in Tucson, Ariz. Where conventional sensors are installed in today’s petroleum tanks, they must be shut down, drained, and vented to allow inspection, driving up testing costs by tens of thousands of dollars.

Yet FluID™ can be installed on the outside of a tank using simple magnets or glue in less than an hour. It can distinguish between grades of gasoline in mere milliseconds and holds security applications, as well, with the ability to identify hidden compartments and cargo.

Today, this technology alleviates the need to ship samples off to laboratories for analysis, in addition to helping companies continuously monitor fuels as they flow between pipelines, among other applications. PST now holds a global sales partnership with Hawk Measurement, based in Melbourne, Australia, to bring the new technology to sales representatives in over 50 countries. The FluID™ team received an Excellence in Technology Transfer Award, signifying its dedication to bringing the technology to private markets.

PNNL’s new Flywheel Program expedites technology transfer by making it easier for prospective licensees to access the samples and data they need to explore and test PNNL-developed technology. Just as a flywheel stores and releases kinetic energy, the Flywheel Program releases past licensing revenue to fund new licensing opportunities by covering the cost of generating important data and evaluation samples.

This helps private companies make their assessments before making a full commitment. Absent the program, companies seeking to commercialize federally developed technology must typically generate the samples and data on their own using published information—an often prolonged and costly process.

The Flywheel Program has already helped many companies assess a variety of new technologies, including PNNL-developed chemistries for lithium batteries. Plans are also underway to facilitate similar testing of its super water repellant coatings, self-healing cements, agriculture nutrient injection devices, and other innovations. The FLC awarded the Technology Transfer Innovation Award to the Flywheel Program crew, in recognition of their unconventional approach that resulted in a significant boost to technology transfer.