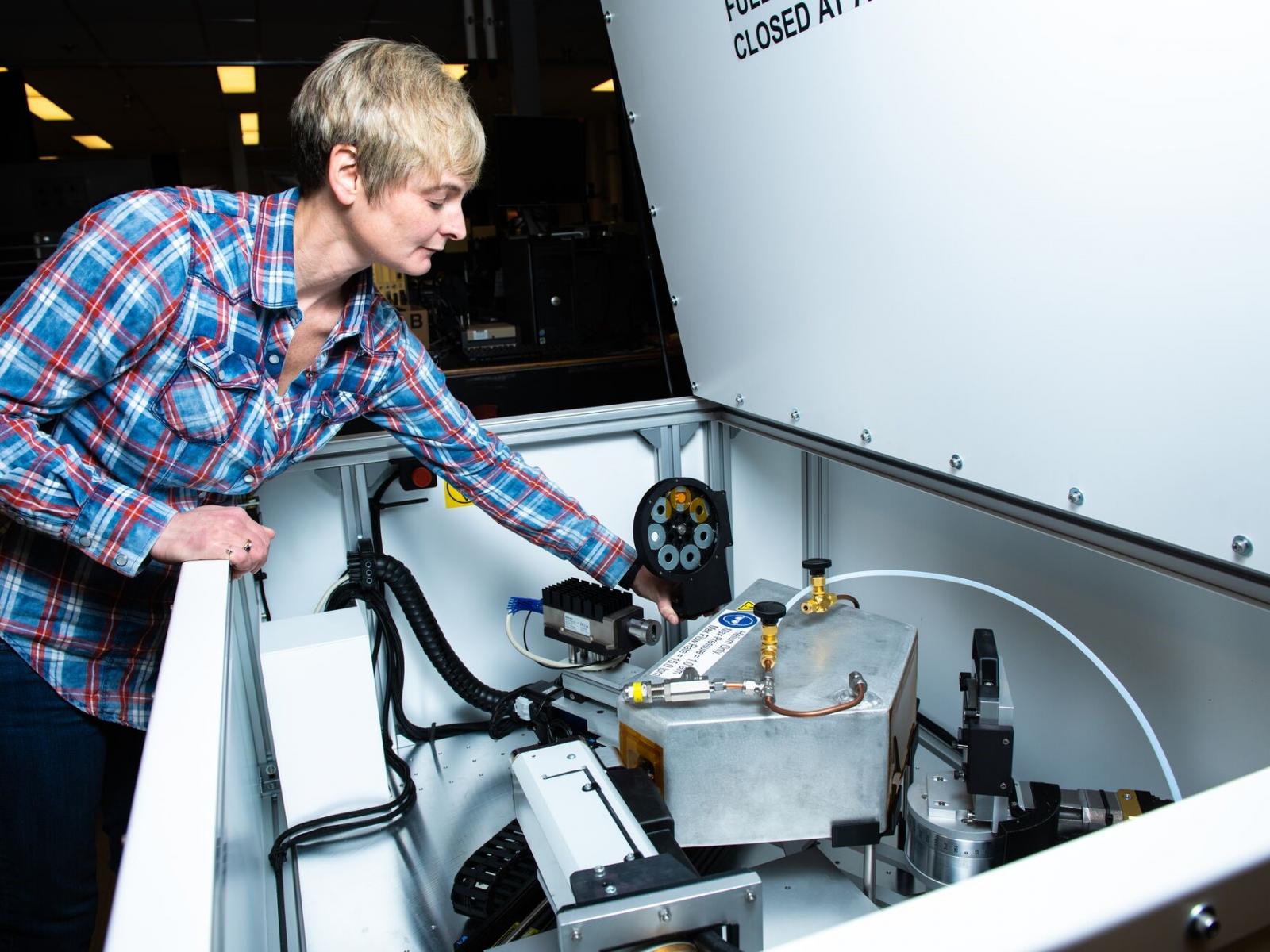 Back in March 2020, PNNL geochemist Carolyn Pearce makes an adjustment to a PNNL XAFS machine in the basement of the Physical Sciences Building. The motorized sample wheel to her left holds the metals or aqueous solutions being tested for their atom-level chemical properties.

For the past year, three small-scale x-ray spectroscopy devices tucked away at Pacific Northwest National Laboratory (PNNL) have begun to dramatically speed up the testing and analysis of candidate novel materials used in energy storage research and environmental remediation.

The size of stand-alone freezers, the devices are based on x-ray absorption spectroscopy (XAS) and x-ray emission spectroscopy (XES). Both use x-ray beams to investigate structure in the proximity of a given atom.

With three such instruments, and with one dedicated to radiochemical characterization, PNNL has more capabilities than most other U.S. research sites.

At work in atomic regions

A refined version of XAS, called x-ray absorption fine structure (XAFS) spectroscopy, uses interference of the electrons released by the excitation with x-rays to discern the geometry of local structures in the region of an atom.

In turn, XES has strong sensitivity to the spin and oxidation state of an ion, related to reactive, unpaired electrons, and to the species within an atom’s ligands. (Ligands are ions or molecules that bind to a central metal atom and often determine its reactivity, a property important in catalysis and geosciences.)

PNNL has one XAFS and one XES housed in a basement room of the Physical Sciences Laboratory (PSL) building, where they are used for research on materials, energy storage, and catalysis.

A second XAFS device is in the Radiochemical Processing Laboratory (RPL) about a half mile northeast in Hanford’s 300 Area. It is used to investigate molten salt reactor technologies, which test the environmental durability of materials designed for reactors with liquid salt as a coolant.

X-ray absorption technology pivots on the fact that core-level electrons in an atom have binding energies that can be excited with an x-ray. The analytical key is that the x-ray energies used to excite electrons are uniquely different for each element in the Periodic Table.

Each PNNL device, housed in a steel container and topped with a hydraulic lid, is distinguished according to its power source as well as its method of sample placement. Each weighs 1500 pounds―about as heavy as a Holstein cow.

Through the Department of Commerce’s Clean Energy Fund, the State of Washington provided funding to acquire two new spectrometers, which will be installed in the new $90 million Energy Sciences Center now under construction on the PNNL campus. The new building will open in 2021, and the facilities—including the state-funded equipment—will be made available to collaborators from the University of Washington, Washington State University, and elsewhere.

When powered up, these white, waist-high machines shoot tunable x-ray beams through various media to target mounted samples. In the case of the XAFS devices, the samples are mostly PNNL-synthesized metals and solutions―candidates for improving catalysis and the materials used to store or transform energy.

Most catalytic processes require a transition-metal catalyst to promote the reaction. To fundamentally understand the mechanism of the reaction, says PNNL scientist John Fulton, “it is essential to directly probe the chemical state of the actual catalytic species.”

Uniquely, XAFS can single out one type of metal in a highly complex reaction mixture. From there, with very high precision, the technology can probe the exact chemical state of that metal species and its local molecular environment.

Getting XAFS and XAS to PNNL

Oliver Y. Gutiérrez, a PNNL chemical engineer, led the effort to get the x-ray spectroscopy devices on campus. Fulton, who is the main PNNL advisor for the analysis and interpretation of XAFS data, was there to help.

Fulton is a veteran of many experiments using XAFS carried out at synchrotrons―electron accelerators that can bend, focus, and accelerate electron beams in order to generate brilliant x-ray beams. In turn, these x-rays are used to analyze samples at the atomic level.

“John (Fulton) is a pioneer in using x-ray spectroscopy to solve problems that involve catalysis,” says seven-year PNNL geochemist and materials scientist Carolyn Pearce.  He typically carries out his studies at large, DOE-funded synchrotron light sources where scientists from across the world are allocated precious “beam time” to accomplish their research.

Analyzing absorption data is challenging because it requires a grasp of both of theoretical physics and theoretical chemistry, says Fulton. That’s needed to estimate how electrons interact with the atomic core and with nearby atoms.

Simulations and interpretation of x-ray spectra also hinge on theoretical advances. These developments are being led by PNNL physicist Niri Govind, in collaboration with computational chemists at PNNL. The team develops capabilities as part of the open-source NWChem computational chemistry program, a collaborative effort maintained at PNNL.

One recent advance in theory is the ability to quantitatively describe how an excited electron interacts with the atom core. Measuring this region of the XAFS spectrum represents one of the strengths of these new machines.

At the PNNL site, Pearce and PNNL senior staff scientist Timothy Droubay do much of the analysis work. The samples they prepare include, for example, experimental nickel metal organic frameworks and candidate battery materials.

Each sample is run through a pellet press, then mounted on a motorized sample wheel. The wheel can hold up to seven samples at once and can be remotely manipulated to run overnight.

From there, the high-power x-ray energy source directs a beam onto a curved monochromator crystal, often made of silicon, which redirects a particular wavelength through a box of helium to to reduce levels of absorption. Helium absorbs less of the x-ray beam than air would.

“It’s like a prism,” says Pearce of the crystal. “All the light comes in and you can direct a single wavelength of light onto the sample.”

After passing through helium, the beam penetrates a sample before reaching a detector and creating data.

The x-ray beams are shielded so they go only through the sample and nothing else.

Fulton says the development of modern XAFS began with a landmark 1971 paper by researchers at the University of Washington and the Boeing Scientific Laboratories. In the 50 years since, researchers at major synchrotron facilities around the world have used XAFS at an explosive pace.

Then came entrants into the world of laboratory-scale x-ray absorption technologies, including EasyXAFS, a Seattle-based company, which supplied PNNL its new instrumentation.

“For decades, researchers have dreamed of a ‘benchtop’ XAFS device,” says Fulton. “The dream is finally being realized.”

Miniaturized XAFS devices come with limitations, however. For one, they deal primarily with a limited set of so-called “first-row” transition metals. Moreover, the intensity of the x-rays on these small devices is “modest when compared to a synchrotron,” says Fulton.

But even with such limitations, says Fulton, the new machines “fulfill the requirements for many different ongoing energy research projects at PNNL.”

The key to XAS and XES is a tunable source of x-rays. They excite a core electron to either jump from its orbital level to another or to be ejected from the atom altogether and scattered by other atoms.

Those processes, says Fulton, “uniquely reveal the complete electronic state of the atom and also provide information on the types and arrangement of nearby atoms to a precision of approximately one-hundredth of an angstrom.”

One angstrom, a hundred-millionth of a centimeter in length, is the typical unit of measure for distances within an atom or molecule.

At PNNL, the samples used in XAS and XES are often metal catalysts in either solid or liquid phase. But Fulton and others are building a device that will allow candidate catalysts to be tested in reacting systems as hot as 400 degrees Celsius―752 degrees Fahrenheit―and with pressures as high as 100 bar. That’s a hundred times higher than atmospheric pressure at sea level.

“It’s a first-of-its-kind sample cell,” says Pearce of Fulton’s innovation, and allows aqueous samples to be analyzed under temperature and pressure―conditions that catalysts undergo in industry. “That’s so important.”

A new generation of catalysts in an aqueous state is the subject of intense study at PNNL, led by Gutiérrez. He is part of a multidisciplinary team within the lab’s Institute for Integrated Catalysis, which includes DOE’s Basic Energy Science catalysis program and PNNL’s Chemical Transformations Initiative.

Looking at aqueous-phase catalysts makes sense because carbon sources for biorefineries contain a lot of water―agricultural waste and biomass crops, for instance. Using such sources requires understanding of liquid-phase catalytic chemistry better than we do now.

“More and more,” says Pearce, “x-ray absorption and emission spectroscopy are becoming useful to understand the details that control how we transform chemicals and store and release the energy within chemical bonds.”