Okeechobee: From Blooms to Biocrude 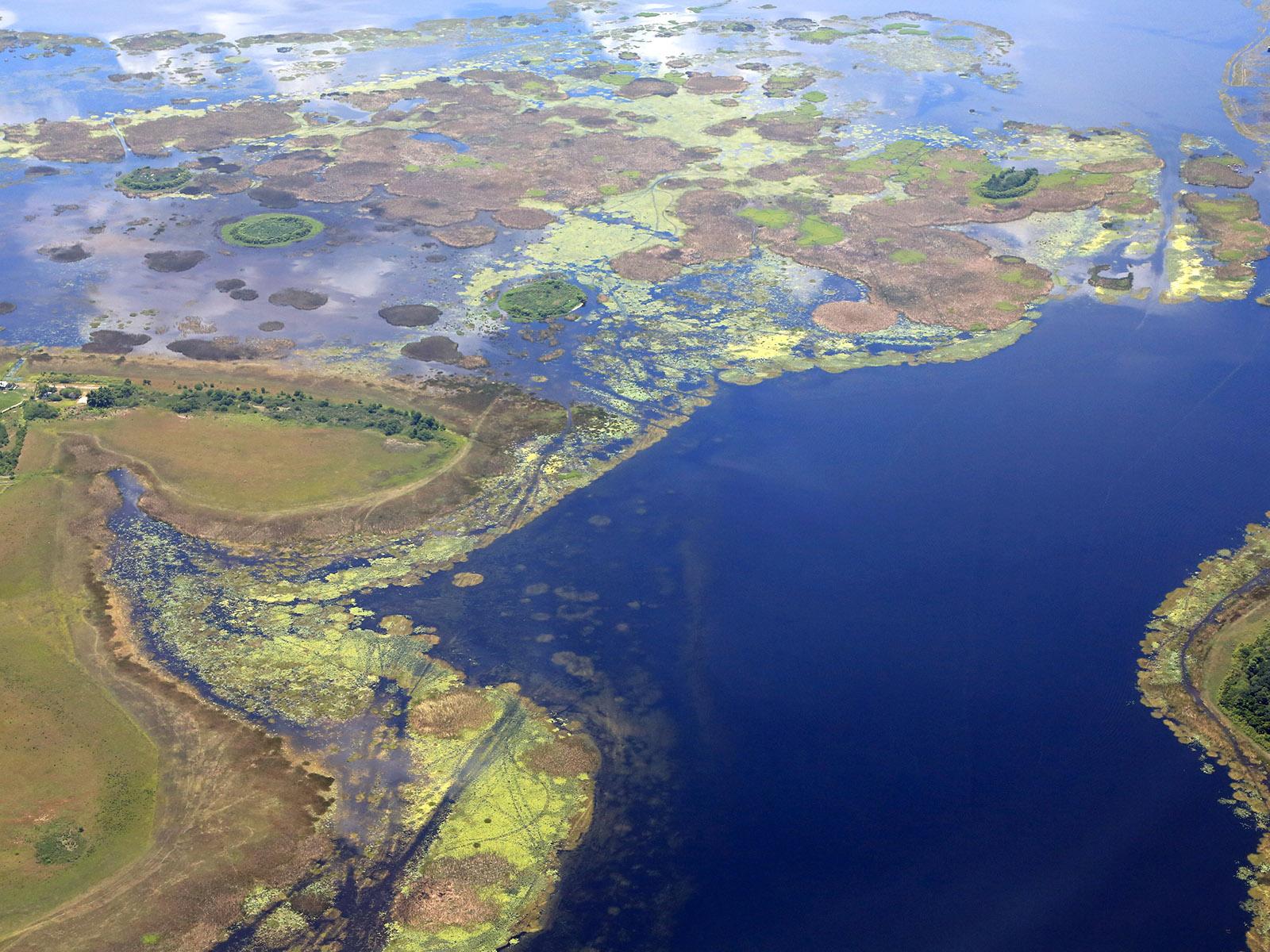 Lake Okeechobee in Florida was the site for a baseline pilot study of the three stages of the Harmful Algal Bloom Interception, Treatment and Transformation System project.

Tourism, health, and commerce—all are critical to a thriving national economy.

But harmful algal blooms and other aquatic nuisances cost the U.S. economy around $1 billion per year. That’s because they pose serious health risks to vacationers and residents alike who boat, waterski, and swim in bodies of water.  They disrupt the overall aquatic ecosystem and the economic and recreational activities that depend on that ecosystem. And they are dangerous for fish and shellfish as well as canines that enjoy swimming and frolicking in the water.

The U.S. Army Corps of Engineers Research and Development Center (ERDC) is leading a three-year project intended to mitigate growth of harmful algae blooms that can span hundreds of square miles.

And Pacific Northwest National Laboratory (PNNL) has helped the ERDC take their research one step further—by investigating these blooms as a viable source of biocrude fuel and fertilizer.

The project is called Harmful Algal Bloom Interception, Treatment and Transformation System, or HABITATS.  The goal is to remove blue-green algae from large bodies of water while simultaneously recovering energy and nutrients like nitrogen and phosphorus—an approach that mitigates near-term impacts from harmful algal blooms and helps reduce future blooms over time.

To achieve this goal, the HABITATS team has deployed a three-stage process: interception, treatment, and transformation.

The first stage—interception—involves collecting algae from the surface of a natural body of water using a skimming device and boom that guide the algae to a collection point. In the treatment stage, the algae are separated from the water using a technology called dissolved air floatation, or DAF, which was developed by project partner AECOM. The newly cleaned water is then returned to the environment, while the algae are further concentrated to maximize the potential for energy and nutrient recovery. The final stage involves transforming the concentrated algae biomass into biocrude using a PNNL-developed process called hydrothermal liquefaction, or HTL.

PNNL takes algae to HTL and back

In 2019, the ERDC conducted a baseline pilot study of the three stages of HABITATS.  The study was based in Moore Haven, Florida—near Lake Okeechobee—a shallow lake covering roughly 740 square miles where massive blooms form annually and have increased in severity during the past decade.

In the pilot, the research team discovered that the DAF consistently removed around 95 percent of the algae from the water and greatly concentrated the algae, reducing phosphorus, nitrogen, and organic carbon concentrations by greater than 95, 65, and 50 percent, respectively. In other words, with removal of the algae and associated nutrients such as phosphorus, the water was much cleaner when returned to the lake.

The resulting algae paste was then transported to PNNL for processing using HTL to determine if biocrude could be produced. HTL mimics the geological conditions the Earth uses to create crude oil, using high pressure and temperature to achieve in minutes what has typically taken millions of years.

“There were some challenges with the wild-harvested algae, like higher-than-normal viscosity resulting from the flocculants used in the DAF process,” said chemical engineer Justin Billing, who led the PNNL portion of the study. “But despite those challenges, we were able to adapt and generate HTL biocrude from nuisance algae harvested under realistic field conditions. It was a great proof of concept.”

This key observation helped guide the next steps for the HABITATS team.

In the current year of HABITATS, the team made adjustments to the algae concentration process as identified during the pilot and will perform further testing to refine the process. PNNL will apply its expertise in catalytic upgrading to make diesel-range renewable fuel blendstocks from the HTL biocrude.

“Now that PNNL has successfully produced biocrude from harmful algal blooms using HTL, we will continue to support the ERDC as they scale up the process,” said Billing.

This research was conducted for the Aquatic Nuisance Species Research Program, sponsored by the U.S. Army Corps of Engineers.