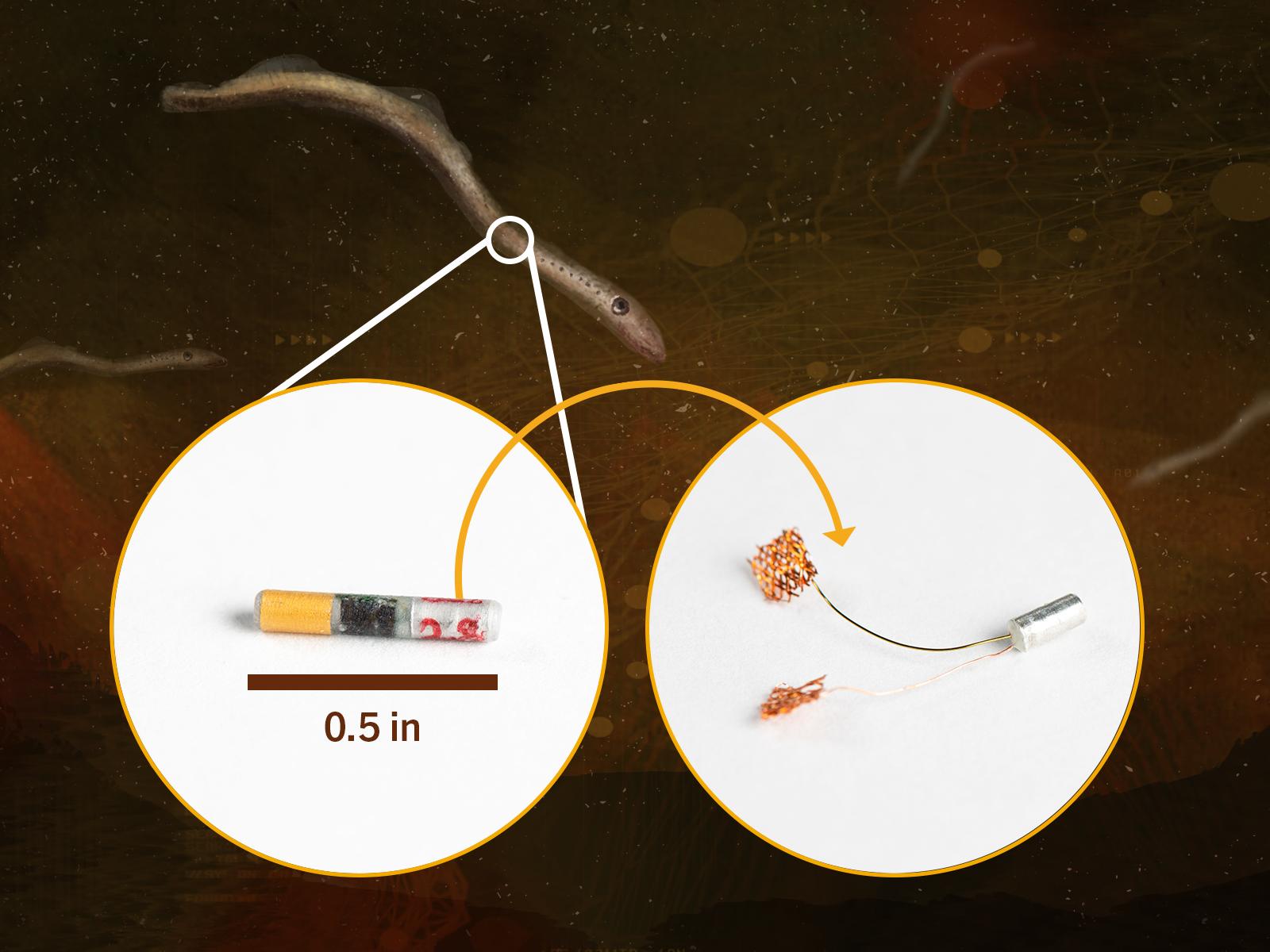 The new, super small acoustic tag (left) powered by a microbattery the size of a grain of rice (right), with twice the power of a household AAA battery. This tag provides new insight to sensitive species, such as Pacific lamprey.

With the worldwide decline of lamprey and eel populations, tracking their movement and survival is a first step toward conservation. However, some tracking sensors—or tags—are too large for smaller fish.

Scientists recently developed a new, tiny battery and tag to track younger, smaller species, such as salmon, eel, and Pacific lamprey. This new information can be used to develop ways to protect young fish and support survival during downstream migration.

In a study published in Cell Reports Physical Science, researchers from Pacific Northwest National Laboratory (PNNL) describe an injectable acoustic tag, called the Eel/Lamprey Acoustic Tag (ELAT), which is about the size of a grain of rice and holds twice the specific energy of a AAA battery.

It also gives even more insight to support sustainable hydropower by following fish passage in and around hydropower facilities for sensitive species. Tagging very young species informs future design and operations of hydropower. This information can be used to develop technology and improve environmental performance, while still providing clean, reliable power.

The past several decades have seen a decline in Pacific lamprey and American eel populations, along with certain subspecies of Chinook salmon. Declines are due to a variety of factors, including habitat loss, ocean conditions, and in some cases, barriers to migration.

Dam construction in the United States spurred industrial development, an agricultural renaissance, and reliable, affordable electricity that continues to this day. Yet, many facilities were built in the middle of last century when little was known about lamprey or eel passage.

“Pacific lamprey are difficult to research and are, therefore, understudied. There’s a lot we still don’t know about them, and this tag opens the door to learning more about their behavior,” said Stephanie Liss, a PNNL Earth scientist.

By tagging them to better understand their movement at all life stages, hydropower mitigative measures, such as bypass systems, can be taken to support their migrations.

Smaller tags need even smaller batteries, and battery size is the limiting factor in fish tag design. While there are commercially available micro batteries smaller than a human hair, they do not pack enough power for acoustic tags.

As part of a decade-long effort to drive down acoustic tag size, PNNL researchers developed a breakthrough battery with a big punch to tag miniscule fish.

The high-energy battery lasts thirty days and powers an acoustic pulse the length of a football field every five seconds. The overall tag costs about the same as larger, commercially available acoustic tags originally developed by PNNL.

"The biggest hurdle was to balance size with performance,” said Deng. “Smaller technology requires tradeoffs among competing parameters, such as battery life or acoustic strength.”

Taking the tag, tiny battery to the field

The tags had no impact on swimming ability and nearly 100 percent of tagged species were detected in a variety of river settings, such as shallow water or the tailrace of dams. Such settings can add complexity in terms of acoustic detection due to challenges like turbidity or fast-moving water.

“This new tag is exciting, because it means better information about previously understudied sizes and ages of fish, particularly ones of conservation concern and cultural significance,” said Liss. Liss led work on Chinook salmon that was recently highlighted in the Canadian Journal of Fisheries and Aquatic Sciences.

Liss and her team found that downstream migrating Chinook salmon in the Columbia River can be as small as two inches. Due to the size of existing acoustic tags, only fish larger than 3.7 inches could be tagged without impacting swimming ability. Now, with the ELAT, fish as small as 2.3 inches can be tagged.

The research is also a big first step in refining size guidelines for tagging young salmon. It included laboratory evaluations that looked at fish behavior in two different temperatures they were likely to encounter in the Pacific Northwest. The researchers found that nearly all fish retained their tags, survived, and even had the same growth rates as untagged fish. Based on this information, Liss and her team were able to develop a new tagging recommendation, showing fish as small as 2.3 inches could be tagged using the ELAT.

“At PNNL, we are continuing to develop our technology with the goal of reducing the battery and tag size and, ultimately, the size of fish we are able to track,” said Deng. “This will help us better understand fish movement to get ahead of any potential conservation concerns, such as being listed as a threatened or endangered species.”

The potential applications extend far beyond eel, lamprey, and salmon. There is interest in using ELAT to track invasive species, such as Asian carp in the Mississippi River Basin or sea lamprey in the Great Lakes, in addition to better understanding other understudied species, such as smelt or shrimp.