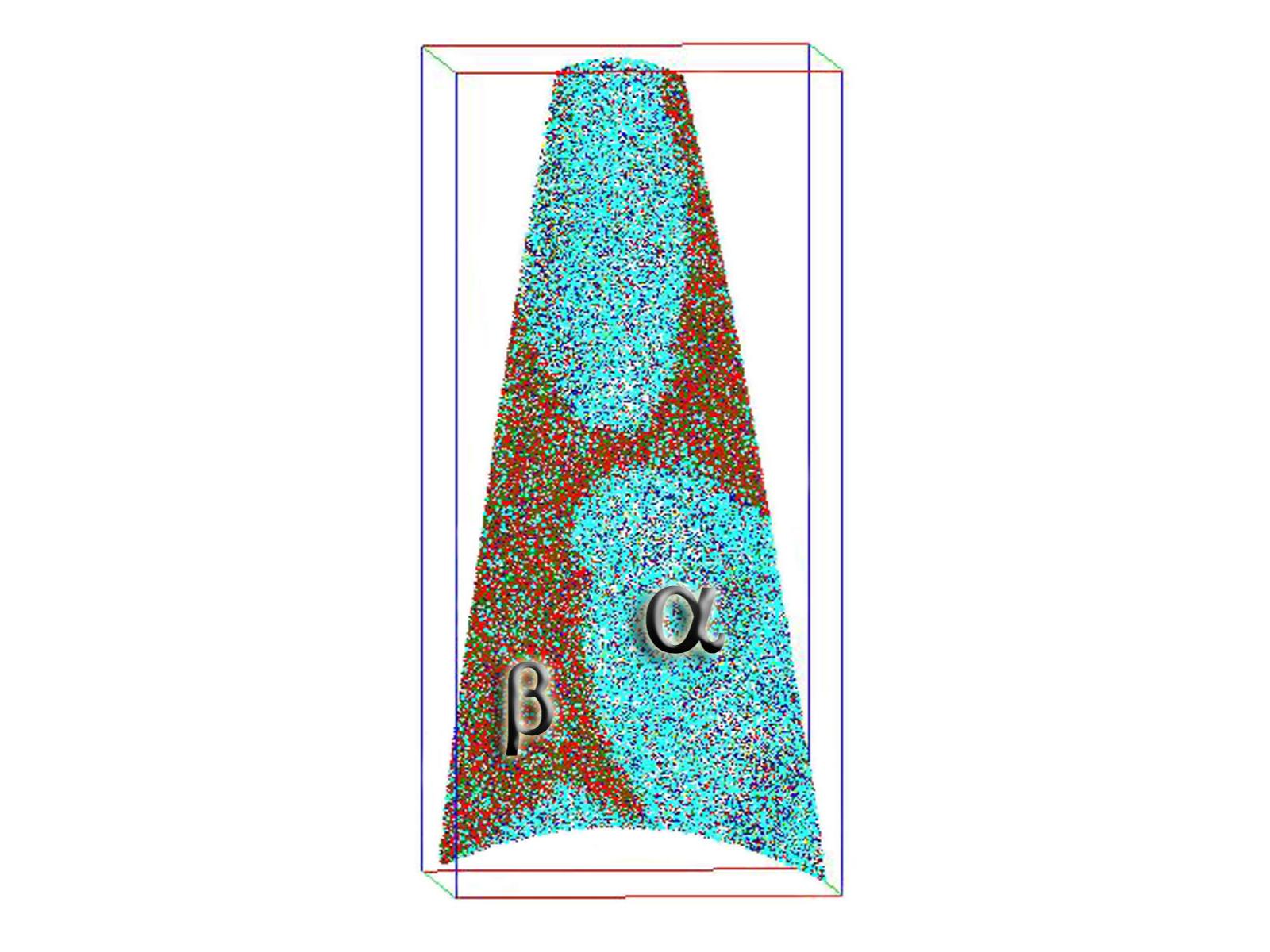 Using Atom Probe Tomography, researchers are able to create an "atomic map" of the arrangement of various atoms in this titanium alloy.

An improved titanium alloy — stronger than any commercial titanium alloy currently on the market — gets its strength from the novel way atoms are arranged to form a special nanostructure. For the first time, researchers have been able to see this alignment and then manipulate it to make the strongest titanium alloy ever developed, and with a lower cost process to boot.

They note in a paper published on April 1 by Nature Communications that the material is an excellent candidate for producing lighter vehicle parts, and that this newfound understanding may lead to creation of other high strength alloys.

Researchers at the Department of Energy's Pacific Northwest National Laboratory knew the titanium alloy made from a low-cost process they had previously pioneered had very good mechanical properties, but they wanted to know how to make it even stronger. Using powerful electron microscopes and a unique atom probe imaging approach they were able to peer deep inside the alloy's nanostructure to see what was happening. Once they understood the nanostructure, they were able to create the strongest titanium alloy ever made.

At 45 percent the weight of low carbon steel, titanium is a lightweight but not super strong element. It is typically blended with other metals to make it stronger. Fifty years ago, metallurgists tried blending it with inexpensive iron, along with vanadium and aluminum. The resulting alloy, called Ti185 was very strong — but only in places. The mixture tended to clump — just like any recipe can. Iron clustered in certain areas creating defects known as beta flecks in the material, making it difficult to commercially produce this alloy reliably.

"This alloy is still more expensive than steel but with its strength-to-cost ratio, it becomes much more affordable with greater potential for lightweight automotive applications."

About six years ago, PNNL and its collaborators found a way around that problem and also developed a low-cost process to produce the material at an industrial scale, which had not been done before. Instead of starting with molten titanium, the team substituted titanium hydride powder. By using this feedstock, they reduced the processing time by half and they drastically reduced the energy requirements — resulting in a low-cost process in use now by a company called Advance Materials Inc. ADMA co-developed the process with PNNL metallurgist Curt Lavender and sells the titanium hydride powder and other advanced materials to the aerospace industry and others.

Much like a medieval blacksmith, researchers knew that they could make this alloy even stronger by heat-treating it. Heating the alloy in a furnace at different temperatures and then plunging it into cold water essentially rearranges the elements at the atomic level in different ways thereby making the resulting material stronger.

An improved titanium alloy — stronger than any commercial titanium alloy currently on the market — gets its strength from the novel way atoms are arranged to form a special nanostructure. For the first time, researchers at Pacific Northwest National Laboratory have been able to see this alignment and then manipulate it to make it even stronger. Using powerful electron microscopes and a unique atom probe imaging approach at EMSL, the Environmental Molecular Sciences Laboratory, a DOE Office of Science User Facility located at PNNL, they were able to peer deep inside the alloy’s nanostructure to see what was happening.

Blacksmithing has now moved from an art form to a more scientific realm. Although the underlying principles are the same, metallurgists are now better able to alter the properties based on the needs of the application. The PNNL team knew if they could see the microstructure at the nano-scale they could optimize the heat-treating process to tailor the nanostructure and achieve very high strength.

"We found that if you heat treat it first with a higher temperature before a low temperature heat treatment step, you could create a titanium alloy 10-15 percent stronger than any commercial titanium alloy currently on the market and that it has roughly double the strength of steel," said Arun Devaraj a material scientist at PNNL. "This alloy is still more expensive than steel but with its strength-to-cost ratio, it becomes much more affordable with greater potential for lightweight automotive applications," added Vineet Joshi a metallurgist at PNNL.

Devaraj and the team used electron microscopy to zoom in to the alloy at the hundreds of nanometers scale — about 1,000th the width of an average human hair. Then they zoomed in even further to see how the individual atoms are arranged in 3-D using an atom probe tomography system at EMSL, the Environmental Molecular Sciences Laboratory, a DOE Office of Science User Facility located at PNNL.

The atom probe dislodges just one atom at a time and sends it to a detector. Lighter atoms "fly" to the detector faster, while heavier items arrive later. Each atom type is identified depending on the time each atom takes to reach the detector and each atom's position is identified by the detector. Thus scientists are able to construct an atomic map of the sample to see where each individual atom is located within the sample.

By using such extensive microscopy methods, researchers discovered that by the optimized heat treating process, they created micron sized and nanosized precipitate regions — known as the alpha phase, in a matrix called the beta phase — each with high concentrations of certain elements.

"The aluminum and titanium atoms liked to be inside the nano-sized alpha phase precipitates, whereas vanadium and iron preferred to move to the beta matrix phase," said Devaraj. The atoms are arranged differently in these two areas. Treating the regions at higher temperature of a 1,450 degrees Fahrenheit achieved a unique hierarchical nano structure.

When the strength was measured by pulling or applying tension and stretching it until it failed, the treated material achieved a 10-15 percent increase in strength which is significant, especially considering the low cost of the production process.

The team collaborated with Ankit Srivastava, an assistant professor at Texas A&M's material science and engineering department to develop a simple mathematical model for explaining how the hierarchical nanostructure can result in the exceptionally high strength. The model when compared with the microscopy results and processing led to the discovery of this strongest titanium alloy ever made.

"This pushes the boundary of what we can do with titanium alloys," said Devaraj. "Now that we understand what's happening and why this alloy has such high strength, researchers believe they may be able to modify other alloys by intentionally creating microstructures that look like the ones in Ti185."

For instance, aluminum is a less expensive metal and if the nanostructure of aluminum alloys can be seen and hierarchically arranged in a similar manner, that would also help the auto industry build lighter vehicles that use less fuel and put out less carbon dioxide that contributes to climate warming.