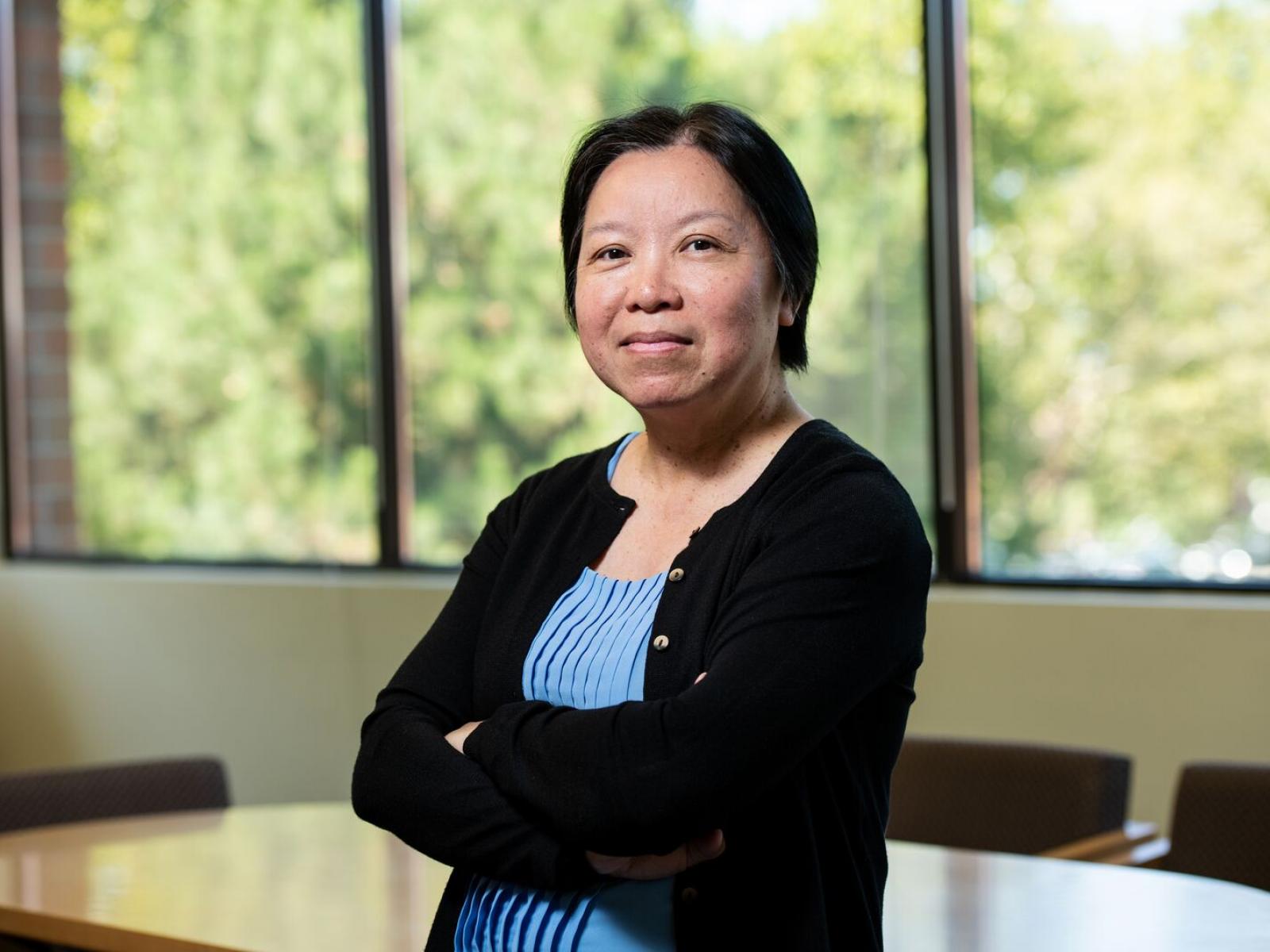 Ruby Leung likes to ask questions. That started at her high school in Hong Kong, where she also became interested in science.

“I was one of those kids in science who always was curious. And then you can find the answers,” said Leung, an atmospheric scientist at Pacific Northwest National Laboratory (PNNL) in Richland, Washington. “Of course, after you answer one question, then you have the next question. It’s a quest. A quest for thinking deeper and trying to get to the truth.”

Leung’s quest has led to numerous accolades, including today’s announcement that she has been named a Department of Energy (DOE) Office of Science Distinguished Scientist Fellow. This honor, authorized by the America COMPETES Act, is bestowed on national laboratory scientists with outstanding records of achievement and provides each fellow with $1 million over three years to support activities that develop, sustain, and promote scientific and academic excellence in DOE Office of Science research. Leung was one of three DOE national laboratory scientists named as DOE Office of Science Distinguished Scientist Fellows.

Leung was honored for pioneering new approaches in climate modeling, the discovery of unexpected impacts of regional climate change, and understanding extreme weather events and their future changes.

“These Distinguished Scientist Fellows are advancing the science behind some of our nation’s greatest challenges, from understanding the impact of climate change to developing the bioeconomy and pursuing fusion as a future energy source,” said U.S. Secretary of Energy Jennifer M. Granholm. “I look forward to their continued success in achieving impactful results as they also work to inspire and guide a diverse new generation of scientists.”

Leung joined PNNL in 1991 and has steadily grown her stature as an internationally renowned atmospheric scientist specializing in climate modeling and the water cycle.

“I am deeply honored to be named a Distinguished Scientist Fellow,” said Leung, a Battelle Fellow who DOE in 2016 named as the chief climate scientist to lead the Accelerated Climate Modeling for Energy project. “I am humbled by any award for work that I believe is essential. As I’ve said previously, since I joined PNNL, I have been very fortunate to have the Department of Energy support my research interests, and for that I am very thankful.”

“DOE and PNNL have benefited greatly from Ruby’s inspiring leadership in atmospheric science,” said PNNL Lab Director Steven Ashby. “Ruby has the admirable and valuable ability to conduct groundbreaking research while fostering collaboration across disciplines and institutions. Ruby deserves a lot of the credit for the esteemed stature that PNNL’s atmospheric science research enjoys today.  We are proud to call her a colleague.”

An early interest in science

Leung, whose father made and sold hats and whose mother was a homemaker, did not envision a life in science until her later teens. One of five children—three sisters and a brother—Leung was the only person in the family interested in science. She completed her bachelor’s degree in 1984 with honors in physics and statistics from the Chinese University of Hong Kong and then taught high school physics for two years.

Her interest in physics grew, especially in fluid dynamics—the flow of liquids and gases and, ultimately, the factors that create weather. Day-to-day climate patterns did not interest her as much as longer-time-scale atmospheric patterns. She chose Texas A&M University to pursue her curiosity, departing Hong Kong in 1986.

By 1991 she’d earned a master’s degree and PhD in atmospheric science. She credited her PhD advisor, Gerald North, for refining her climate science views. She wrote her dissertation on "Atmospheric Variability on a Zonally Symmetric Land Planet," which studied the effects of external forcing on the atmosphere. For her postgraduate degree, she co-authored a paper titled "A study of long-term climate change in a simple seasonal nonlinear climate model."

“After I arrived at Texas A&M, I learned about this new professor who was studying climate,” Leung said about North. “I liked the type of research that he was doing, which was looking at the energy of the climate system. So, for my dissertation and my master’s thesis, I looked at climate predictability. We try to understand how predictable climate is and what are the processes that control how predictable climate is. We published a study using information theory to quantify climate predictability—the first study to use information theory in climate research.”

Leung began working at PNNL in the midst of completing her dissertation. She smiles at the memory of impressing new colleagues because of her use of Texas A&M’s supercomputer to run climate simulations. It’s standard procedure now, of course, but not back then. It also led to the creation of ever-more sophisticated climate models that are essential to predicting climate change.

When Leung arrived at PNNL, the laboratory’s Atmospheric Sciences Division was only a fraction of its size today. She has played a foundational role in the growth of the division, from its roots as a small group of scientists focused on atmospheric dispersion and boundary-layer processes to its current status as one of the premier atmospheric science and climate research groups in the world.

“There were a lot of atmospheric scientists, but none of them were doing climate research,” Leung recalled. “It was right around the time funding was decreasing for studying acid rain—which was a very big issue in the 1980s. At the same time, more scientists became interested in climate science.”

Leung’s early work—then supported by the National Oceanic and Atmospheric Administration, the National Aeronautics and Space Administration, and the U.S. Environmental Protection Agency—focused on hydroclimate and how mountain water resources vary and change over time. This research, she said, leveraged and strengthened capabilities she developed for high-resolution climate modeling and coupling of land–atmosphere processes to understand and predict hydroclimate and its extremes at the nexus of land, water, and atmosphere.

While Leung recalls an atmospheric science community that was small, that’s not the case today. “The climate community is very big,” she said. “There are people who are interested in studying a wide range of issues, from carbon dioxide’s effect on the climate to how tiny particles in the atmosphere affect clouds and precipitation, to how an urban area may be affecting climate, to how atmosphere interacts with land and ocean.

“An important role for me now is to work with our scientific community to identify gaps and opportunities to advance our field,” said Leung. “Driven by the societal need to cope with climate change, there is a high demand for climate information. With more demand comes more challenges and responsibilities. Both fundamental and use-inspired research areas are essential components of climate science going forward, and I look forward to continuing to play a role in advancing both fronts.”