How Lasers Can Help with Nuclear Nonproliferation Monitoring 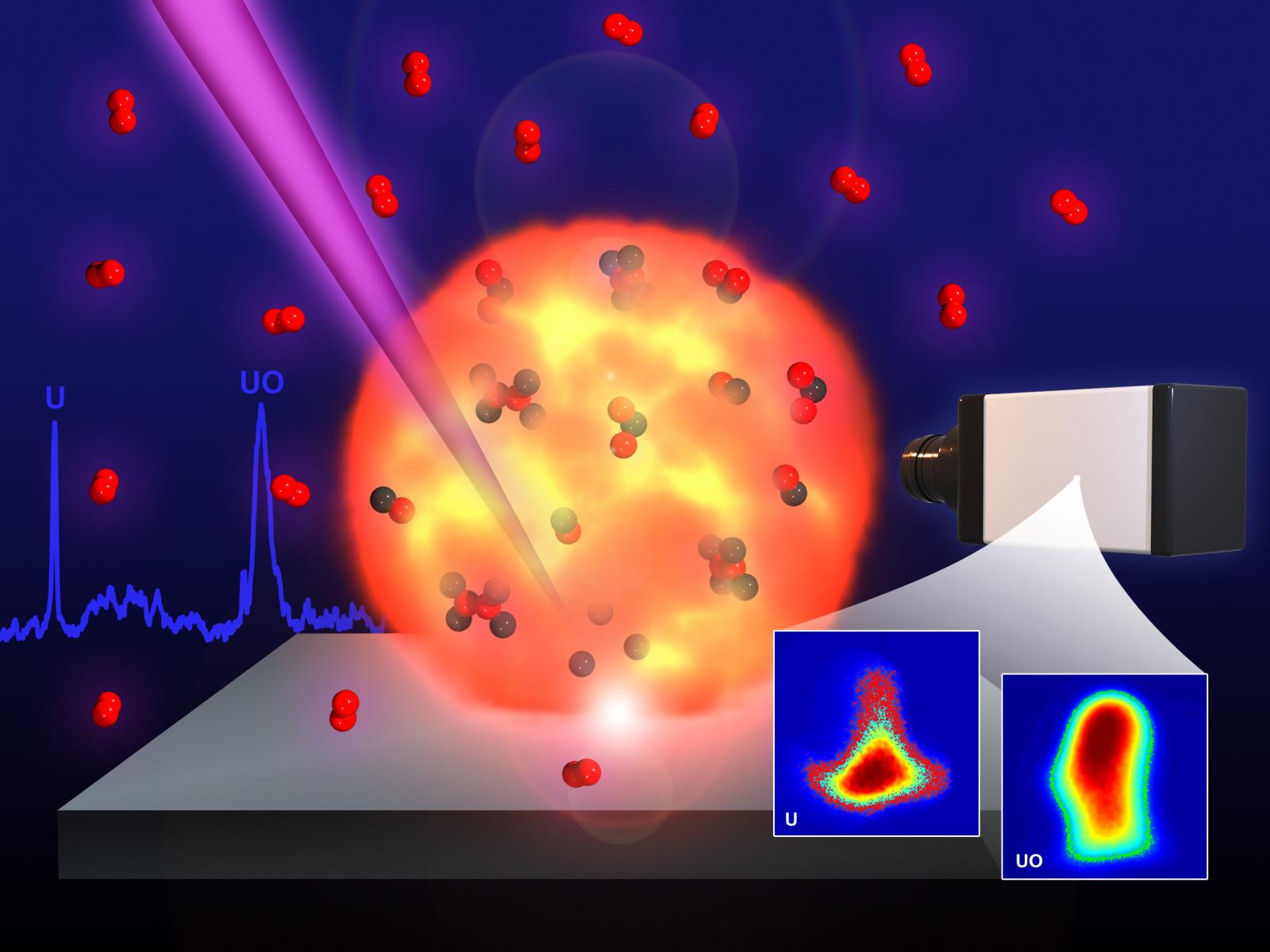 There are times when it’s complicated or impossible to bring a sample into a laboratory to test its composition.

This is especially true when it comes to detecting explosions containing nuclear material. Detection that can be done quickly or onsite minimizes human exposure during hazardous collections or laboratory analysis.

However, the nature of nuclear chemistry—particularly oxidation, the way uranium interacts with oxygen during a nuclear explosion—is largely unknown, leaving gaps in our ability to accurately identify nuclear activities. A team of researchers led by PNNL physicist Sivanandan S. Harilal is working to expand our uranium chemistry understanding using a surprising tool: lasers.

The method, detailed in a recent paper in the Journal of Analytical Atomic Spectrometry, shows how measuring the light produced in plasmas made from a laser can be used to understand uranium oxidation in nuclear fireballs.  This capability gives never-before-seen insight into uranium gas-phase oxidation during nuclear explosions. These insights further progress toward a reliable, non-contact method for remote detection of uranium elements and isotopes, with implications for nonproliferation safeguards, explosion monitoring and treaty verification.

A pulsing, fast-as lightening laser blasts into a solid material and excites the atoms so they vaporize into a tiny, brightly colored plume of plasma. The reaction when the atoms jump into this superhot plasma plume emits light which researchers can capture and study using optical spectroscopy.

Plasmas made from different elements at different temperatures emit different wavelengths of light, each of which produce a distinct color. Thus, the color of plasma in a candle’s flame is different than the plasma made in a neon sign, or the microscopic plasma plume Harilal and his team generate to study uranium.

The distinct colors of light emitted by a plasma are the same no matter how much of a material is turned into a plasma. Harilal’s uranium laser produced plasma (LPP) is made from such a small amount of nuclear material that the method can be considered non-destructive. Even so, the light measurements researchers get from LPP is similar to the reactions in the fireball produced during a nuclear explosion.

“It’s a question of scale,” says Harilal. “The lasers create the same fireball chemistry that happens in a nuclear explosion, so we can study the chemistry and how it reacts to different environmental conditions. It’s small, but the light is good. We can collect it with no problem.”

Seeing the light in LPP

Although light from plasmas is easy to collect, the difference in the wavelengths of light that specific molecules emit is more difficult to decipher. And uranium is so reactive with oxygen in the explosion fireball that it creates many different uranium oxide combinations. These molecular combinations can be anywhere from one uranium atom paired with a single oxygen atom, to multiple uranium atoms bonded to as many as eight oxygen atoms.

Multiple uranium species immediately complicate how spectroscopy deciphers simple light collection. These uranium species emit light in a such a tight color spectrum with such small differences in wavelengths that each wavelength is only beginning to be matched with its respective uranium oxide transition.

One filter measured only atomic uranium, and another measured uranium oxide in the plasma during the laser pulses. The team then measured the light emitted from the plasma as they increased oxygen in the environment, watching to see how the chemistry changed in the presence of more oxygen.

Using precisely timed snapshots of the plasma (called fast-gated imaging), Harilal and his team directly observed how uranium monoxide and uranium atoms moved through the LPP over time and by location. This let them see how and where the species were formed and how they persisted as the plasma plume expanded and dissipated.

The team found that uranium oxides are formed further from the target, where lower temperatures favor molecular recombination. Uranium oxides also form at later times in the lifetime of the plasma. When more oxygen is present, the plasmas don’t last as long.

In addition to helping researchers better understand uranium plasma chemistry, the laser-based techniques used in this work are also under development for in-field, remote nonproliferation monitoring as well. Since laser ablation coupled with optical emission spectroscopy measures light emitted from a plasma, data collection can be done from a safe, standoff distance that requires no sample handling. This technique has implications for nuclear forensic and safeguards monitoring.

This research was performed as part of the Department of Energy’s National Nuclear Security Administration. Team members included Elizabeth Kautz, Bruce Bernacki, and Sivanandan S. Harilal of Pacific Northwest National Laboratory and Patrick Skrodzki, Milos Burger, and Igor Jovanovic of the University of Michigan, with Mark Phillips from the James C. Wyant College of Optical Sciences at the University of Arizona Tucson, and support from Opticslah in Albuquerque, New Mexico.

Staying Ahead of Antibiotic Resistance