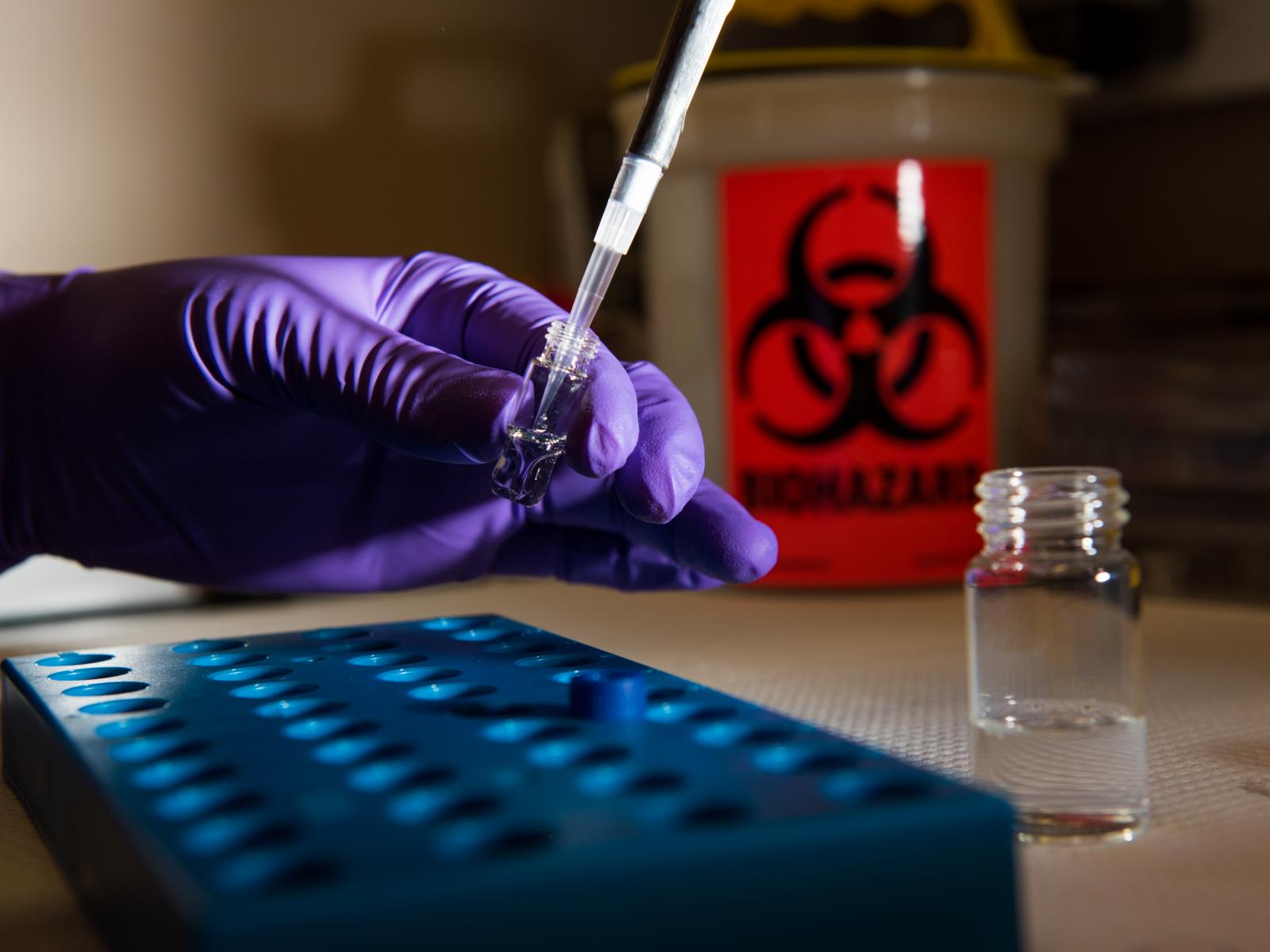 Forensic proteomics directly analyzes proteins in blood cells, clothing fibers, medications, and pathogens in applications like microbial characterization, protein toxin detection, and forensic fluid analysis. A new book edited by PNNL biochemist Eric Merkley details this emerging technique in pursuit of making it a widespread forensic method when DNA is missing, ambiguous, or was never present to begin with.

A new book edited by a PNNL biochemist details an emerging forensic method that could become as widespread and trustworthy as DNA profiling.

The method is called mass-spectrometry-based proteomics, which examines the proteins that make up many parts of living things. These proteins exist in unique combinations in everything from blood cells and clothing fibers to certain types of medicine and the diseases they fight. Because proteomics analyzes these proteins directly, forensic proteomics can fill in when DNA is missing, ambiguous, or was never present to begin with.

In the book, Applications in Forensic Proteomics: Protein Identification and Profiling, PNNL’s Eric Merkley gathers articles by leaders in the field to provide a snapshot of the method’s promising applications and outlines ways to develop the method to meet stringent legal standards for scientific testimony.

“This is an effort to crystallize a community of experts in the field,” said Merkley. “With the right research focus and rigorous approach at this early stage, in 10 years, proteomics could be routinely adopted in the courtroom to address critical unanswered questions in forensic science.”

Forensic science analyzes evidence to answer courtroom questions like “Who was here?” and “What were they doing?” The trouble is, much of what people consider forensic science isn’t actually approached very scientifically”. Without a true scientific approach, pattern recognition techniques like fingerprint or hair analysis are increasingly challenged or criticized, leading some judges to throw these methods out of court.

The exception to this forensic black eye is DNA profiling, which has a stronger statistical foundation and more scientific validation. However, when DNA isn’t enough, proteomics can fill in.

For example, forensic proteomics can provide meaningful evidence in a search centered on a protein-based toxin, drug, or sports doping hormone. It can reveal clues about whether a disease occurred naturally or as the result of a biological attack. And forensic proteomics can aid investigations after DNA has identified which individuals were present, but not what type of tissue, fluid, or fingerprint residue they left behind.

A method of mass detection

Scientists already detect certain proteins when they are testing for things like anthrax or other bioweapons by knowing what they are looking for in advance. To target the suspected protein, researchers develop an antibody that binds to one specific protein and gives a positive or negative reading, much like the lines on a home pregnancy test.

Detecting a single protein is useful, but because there are so many different types of proteins—a few thousand in a single bacterial cell and tens of thousands in human tissue—it would be expensive and time-consuming to make an antibody to detect every protein one by one.

"With the right research focus and rigorous approach at this early stage, in 10 years, proteomics could be routinely adopted in the courtroom to address critical unanswered questions in forensic science" - Eric Merkley

Proteomics is different because it looks at all the proteins in a sample at the same time. To do this, researchers relax many tightly coiled proteins using chemicals called denaturants. Next, they use enzymes to cut the relaxed proteins into short amino acid chains known as peptides. Mass spectrometers analyze the peptides, tracking the number and type of peptide signals they detect.

The researchers assemble all the peptide signals to figure out how many point to a protein, organism, or tissue of interest, instead of detecting signals from just a single protein and ignoring everything else.

Gathering so much data makes proteomics ideal for forensics, where a sample doesn’t come with much background information to hint at which antibodies to use or whether to use antibodies at all.

“Suppose you think there’s something there, but you don’t know what it is,” said Merkley. “In that case, testing for lots of things at once is the ideal scenario.”

This shotgun testing approach sounds difficult; however, acquiring all those signals is the easier part. Analyzing the signal data to know what it means—and so it can be reliable in a courtroom—is at the heart of the book.

Making a case for forensic proteomics

To be admitted in federal court, scientific evidence must meet the Daubert standard, a rule for scientific testimony that assures experts validate forensic methods. Publishing is one of the best ways to show that a technique is defensible in court because it subjects the method to peer review, which is one measure of acceptance in the scientific community.

Legal admissibility also includes showing how a method could be falsified and refuted. DNA is powerful because it relies on well-known probabilities and statistics to identify individuals with as much as one in 575 trillion specificity. Developing these precise probabilities for forensic proteomics is key to achieving the same type of legal prowess.

To illustrate the need for probabilities, Merkley gives the example of a protein toxin called ricin that shares a peptide with a protein from a Central American aquatic snail. If an investigator finds only that peptide, they can’t necessarily know they have identified ricin, but they can be more certain if they find 10 other peptides from ricin that aren’t found in the snail.

“Multiply that problem hundreds of thousands of times across all the organisms on Earth,” says Merkley, “and it becomes clear each observation doesn’t have the same weight for saying a certain thing is there.”

Further complicating an already tricky problem: There isn’t a database that identifies every peptide sequence in the millions of proteins in every organism that has ever lived. Researchers must therefore quantify how frequently—or rarely—peptide combinations occur, consistent statistical standards that only experts can create.

Merkley teamed with Kristin Jarman, a PNNL statistician, for the last chapter of the book to suggest statistical methods that he hopes to see the scientific community expand.

“I would like to see more efforts to codify standards,” says Merkley. “My hope from the book is that it develops a strong community to find the best way to develop this tool together.”