Fire and Ice: The Puzzling Link Between Western Wildfires and Arctic Sea Ice 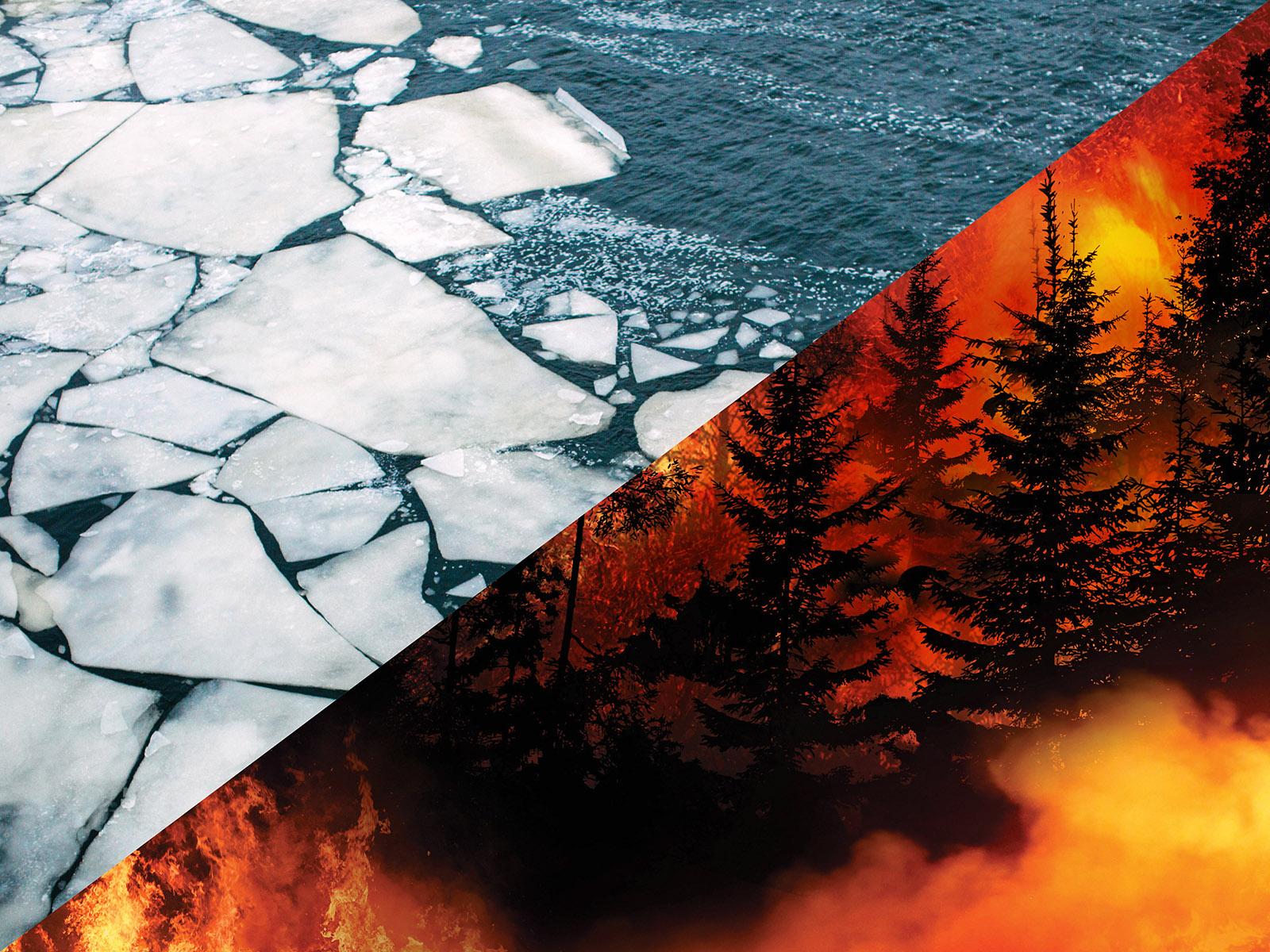 Though distantly spaced, the Arctic and the western United States are connected through a relationship between sea ice and wildfire weather. As Arctic sea ice melts, regional surface warming can shift atmospheric circulation patterns that ultimately bring about drier conditions in western states like Washington, California, and Oregon, according to a recent study led by PNNL researchers.

RICHLAND, Wash.—“Some say the world will end in fire,” wrote Robert Frost a century ago. The poet described one popular take on the world’s end before shifting to its apocalyptic opposite, writing, “some say in ice.”

But the relationship between fire and ice, in terms of Earth’s climate, is not quite as “either or” as Frost depicted. In the case of a study presented today at the 2021 AGU Fall Meeting in New Orleans, that relationship is more “give and take.”

The team of researchers behind the recent study describe a link between dwindling sea ice and worsening wildfires in the western United States. As sea ice melts from July to October, sunlight warms the increasingly iceless, surrounding area. This ultimately brings heat and fire-favorable conditions to distant states like California, Washington, and Oregon later in autumn and early winter.

The researchers describe this relationship—its existence previously known, but its underlying mechanism now described for the first time—as similarly influential as climate patterns like the El Niño-Southern Oscillation.

“It’s not a perfect analogy, but teleconnections like this are a bit like the butterfly effect,” said Hailong Wang, an Earth scientist at the Department of Energy’s Pacific Northwest National Laboratory and coauthor of the new study. He references the popular feature of chaos theory where a butterfly’s flapping wings are thought to influence the formation of a distant tornado.

“Climate conditions in one part of the world can, over time, influence climate outcomes from thousands of kilometers away,” said Wang. “In our case, we find the Arctic region and the western United States are connected by this relationship. Regional land and sea surface warming caused by sea ice loss distantly triggers hotter and drier conditions in the West later in the year.”

Wang will present his findings virtually at an AGU press conference that explores wildfire in a changing climate today, Thursday, Dec. 16, at 11 a.m. Pacific Standard Time.

A tale of two vortices

Wang and his fellow authors found that, as Arctic sea ice melts and the surrounding land and sea surfaces warm, a vortex strengthens in the atmosphere above the heated area. This vortex, spinning counterclockwise like a cyclone, is spawned by differences in air pressure.

The powerful vortex constantly pushes the polar jet stream out of its typical pattern, diverting moist air away from the western United States. With the now wavier jet stream nudged off its usual course, a second vortex, spinning clockwise, forms under the ridge of the polar jet above the western United States. This second vortex—similar to the vortex responsible for the Pacific Northwest’s extreme heat earlier this summer—brings with it clear skies, dry conditions and other fire-favorable weather.

As the Arctic continues warming, it can sharpen the contrast between these two distantly connected systems, further exacerbating conditions in an already fire-ravaged region. More than three million acres have burned across California alone during the 2021 wildfire season.

“This dynamics-driven connection warms and dries out the western United States region,” said Yufei Zou, lead author and data scientist who was a postdoc at PNNL when the study was conducted. “By uncovering the mechanism behind that teleconnection, we hope those in charge of managing forests and preparing for wildfires will be more informed.”

To probe the influence of Arctic sea ice in forming fire-favorable climate conditions, the study’s authors called upon the past four decades of recorded sea ice levels. The team isolated the mechanism at play through modeling conducted at the National Energy Research Scientific Computing Center, a DOE Office of Science user facility at Lawrence Berkeley National Laboratory.

Arctic sea ice has continually declined since scientists began measuring its loss in the late 1970s. End-of-summer sea ice cover has diminished by 13 percent each decade relative to the 1981-2010 average, according to the National Oceanic and Atmospheric Administration.

Arctic sea ice is projected to continue declining, eventually leading to periods of iceless Arctic waters before the 2050s. Today, even the older, thicker ice that persists year-round is now thinner and more fragile.

In addition to Wang and Zou, authors from PNNL include Philip J. Rasch and Rudong Zhang.

This paper, “Increasing Large Wildfires Over the Western United States Linked to Diminishing Sea Ice in the Arctic,” was supported by DOE’s Office of Science.