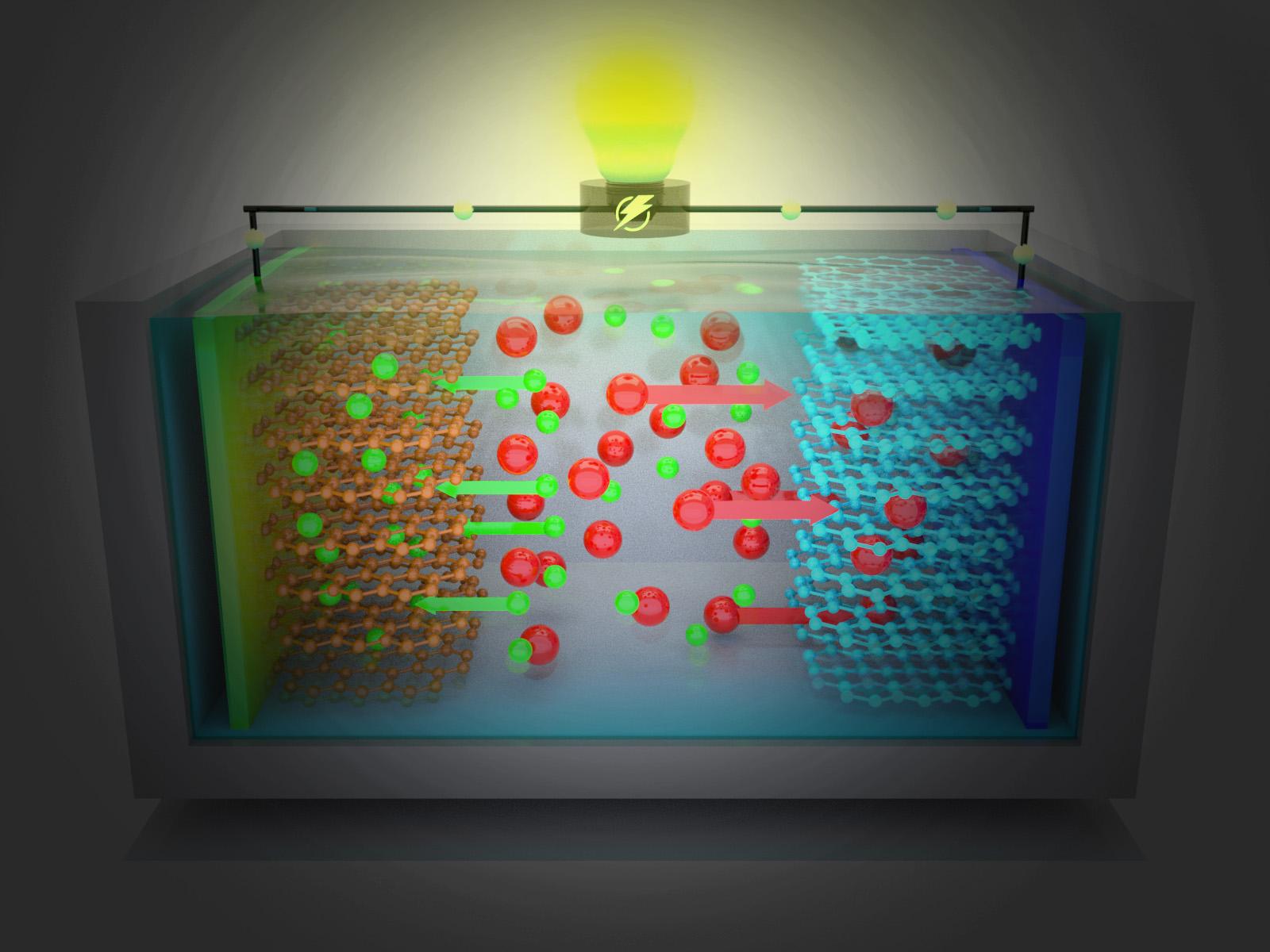 Widespread adoption of renewable energy in the power grid requires the right kind of battery—one that is safe, sustainable, powerful, long-lasting, and made from materials that are plentiful and ethically sourced.

Thanks to scientists at Pacific Northwest National Laboratory (PNNL), we may be one step closer to realizing that vision.

Successfully using a graphite cathode in an aqueous electrolyte

The use of aqueous electrolytes is not new, nor is the use of graphite. In fact, lithium-ion (Li-ion) batteries use graphite as the anode component, and non-aqueous DIBs use graphite as both the anode and the cathode. What’s new is combining the two in a new chemistry.

“It’s just a big mashup of really cool stuff put together,” said Rodríguez Pérez. “The concentration of salt ions is so incredibly high, it’s almost like water is not there anymore. So, the aqueous electrolyte doesn’t decompose in voltages where it normally would, allowing the use of graphite. That is the most amazing outcome in this.”

Rodríguez Pérez is building on prior research conducted by Kang Xu from the United States Army Research Laboratory and Chunsheng Wang from the University of Maryland, who first developed these highly concentrated aqueous electrolytes in 2015.

The battery showed promising performance during testing. At approximately 2.3 to 2.5 volts, it achieved one of the highest operating potentials of any aqueous battery.

But the new cell chemistry doesn’t only improve battery performance, it's also better for the environment.

Cathodes made of highly abundant carbon-based materials, like natural graphite, are less costly and more sustainable than environmentally harmful, scarce, and expensive metals, like nickel and cobalt, regularly used in Li-ion batteries. Using an aqueous electrolyte also makes DIBs safer as they are non-flammable compared to commercial Li-ion batteries, which use non-aqueous electrolytes exclusively.

“In battery research, we’re trying to achieve several outcomes that are critical to market growth and adoption,” said Rodríguez Pérez. “We want to use more abundant, less costly, and more sustainable materials, while most importantly increasing the life of the battery and maintaining moderate energy density.”

"The cell chemistry of graphite || zinc metal with the specially designed aqueous electrolyte can exhibit advantages with respect to cost, sustainability, and safety compared to Li-ion batteries, due to the materials used," explains Tobias Placke, group leader of materials at MEET Battery Research Center.

In DIBs, both the positive cathode and negative electrode can be made of low-cost carbon-based materials like graphite. This makes DIBs a particularly promising solution to support the widespread adoption of renewable energy sources, like wind and solar for the power grid.

But until now, the use of graphite as a cathode has been limited by the narrow electrochemical stability of water, which caps out at 1.23 volts. The electrochemical stability window is the potential range between which the electrolyte is neither oxidized nor reduced (decomposed), and an important measuring stick for the efficiency of an electrolyte in contact with an electrode. Graphite would require a much wider stability window.

And that’s just what this new cell chemistry does.

The mechanics of DIBs are what make it a particularly attractive option for the power grid.

Generally speaking, each battery cell has three main parts: a positive electrode called a cathode, a negative electrode called an anode, and an electrolyte. In Li-ion batteries, power is generated when the Li-ions (positively charged ions or cations) flow from the cathode to the anode and back again in a rocking chair motion through the electrolyte. This balances the charge when electrons flow through an external circuit from the cathode to the anode, creating electricity.

In DIBs, both cations and anions (negatively charged ions) are active and move in parallel from the electrolyte to the anode and cathode, respectively, in an accordion-like fashion; this allows for potentially high-power applications, like supercapacitors, while still being able to use moderately high energy, like batteries. Furthermore, this mechanism renders the ions in the electrolyte active, allowing for further optimization of the battery.

But there’s still work to do. DIBs still perform at only about a third of the capacity of Li-ion batteries—so they can’t compete, yet. Li-ion batteries still have one of highest energy densities of any comparable system, meaning they can provide a significant amount of energy and still stay small. This advantage is one of the main reasons they’re used in mobile applications, such as smartphones and electric cars.

But Rodríguez Pérez sees a solution to that: make DIBs three times bigger.

“If we can achieve a high enough voltage for the battery, even if performance is not on par with lithium-ion batteries, we can make dual-ion batteries bigger and make them a suitable candidate for grid energy storage applications,” said Rodríguez Pérez. “Though you may not be able to use it to power your phone, your local utility can use it to store energy for your home, stabilize the grid, and increase reliability.”

The International Union of Pure and Applied Chemistry listed DIBs as one of the “Top Ten Emerging Technologies in Chemistry 2020” to recognize its potential in solving “major global problems” in the future.

Continuing to develop the science behind grid energy storage batteries can yield new approaches and new cell chemistries and bring us even closer to widespread adoption of renewable energy sources for the electrical power grid.

And that’s just what Rodríguez Pérez and his team at PNNL intend on doing. The next step involves optimizing the aqueous “water-in-bisalt” electrolyte—currently the salt used in the cell chemistry is more expensive than both electrodes.

“PNNL is at the ground floor with this promising technology,” said Rodríguez Pérez. “There is so much room for innovation in dual-ion batteries.”