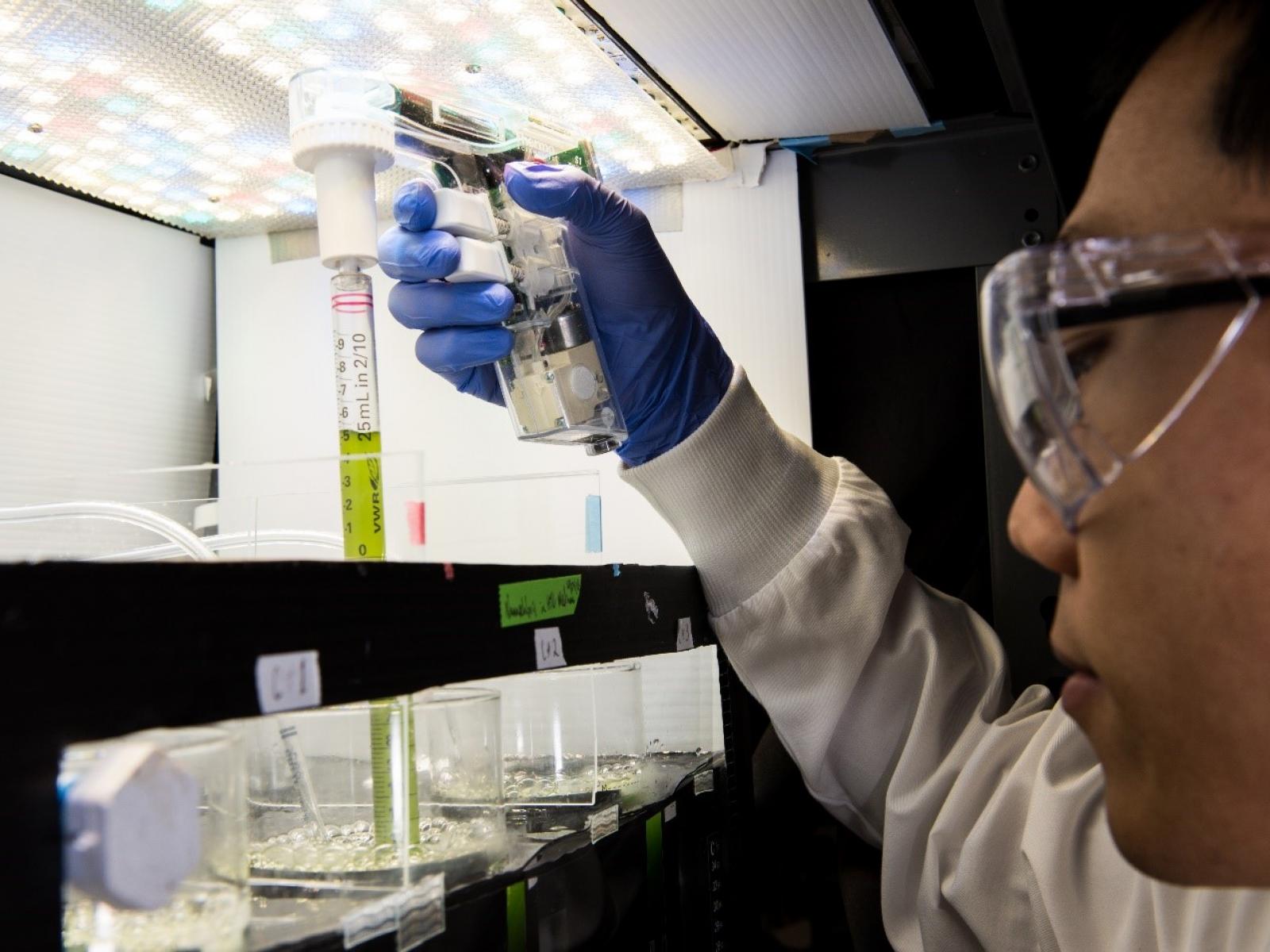 A consortium made up of four DOE national laboratories is making headway into investigating a variety of algal strains that one day can be converted to clean, sustainable biofuels.

In the third year of the Development of Integrated Screening, Cultivar Optimization, and Verification Research Consortium project—or DISCOVR—the consortium team has identified a strain that progressed successfully through multiple evaluation phases.

This shows promising potential to contribute to meeting productivity goals for open ponds that, if replicated and scaled-up, could help meet DOE’s targets for low-cost algal biofuels.

That’s a step in the right direction for the nation’s transportation industry, where cars, trucks, trains, and airplanes currently powered by gasoline, diesel, or jet fuels can one day run on inexpensive biofuels created from algae.

Algae – these understudied organisms are vast reservoirs of biological diversity with many unique characteristics that are only just beginning to be observed, described, and understood. By harnessing this diversity, scientists hope to unlock the vast potential for these tiny micro-organisms to contribute to the future of U.S. renewable energy.

Algae can be converted into biocrude oil using high temperature and pressure through a PNNL-developed process called hydrothermal liquefaction—achieving in minutes what typically takes millions of years. Algae cultivation also benefits the environment, removing carbon dioxide from the atmosphere, making it a nearly carbon-neutral feedstock source.

Maintaining a supply of algae for biofuel production, though, poses a challenge to the energy industry. There are a staggering 100,000 or more strains of algae, some that grow better in different climates and in freshwater, saltwater, or wastewater environments.

Funded by DOE’s Bioenergy Technologies Office, the DISCOVR team’s goals are to deliver high-productivity strains that can be cultivated outdoors, while also testing new concepts that further increase biomass productivity (the amount of biomass that can be produced per pond surface area each day) and the value of biomass as well as improve the stability of algal crops in outdoor ponds.

To achieve their goals, the team is screening and testing new algae strains obtained from culture collections or companies involved in microalgae biofuels research, such as ExxonMobil, MicroBio Engineering, and Algenol. They are using a progressive, multi-phase pipeline and capabilities at various national labs.

The target: seasonal and annual biomass productivity data that will inform the economics of future industrial-scale outdoor cultivation of this biofuel resource. The consortium team has so far evaluated more than 50 strains of algae through this multi-phase process.

The Results from the Pipeline

In this third year of the consortium project, a summer season strain called Scenedesmus obliquus UTEX393 progressed through DISCOVR’s pipeline. Although an initial attempt at testing this strain in the outdoor testbed at AzCATI in 2018 was not successful due to fungus infections that caused repeated pond crashes, new attempts in 2019 using novel crop protection techniques allowed the team to avoid pond crashes and demonstrate large gains in productivity.

“By cultivating the best DISCOVR summer season strain, Scenedesmus obliquus UTEX393, as well as a top winter season strain Monoraphidium minutum 26B-AM that also made it through the pipeline, in outdoor ponds throughout the year using crop rotation, we were able to demonstrate a 50 percent increase in annual biomass productivity in the last two years,” said PNNL scientist Michael Huesemann, who is leading the DISCOVR effort.

The DISCOVR team estimates that this improvement, if modeled in a scaled-up, future scenario where many other challenges have also been overcome, could help contribute to lowering the cost of algal biofuels.

Another strain—Picochlorum isolated from the Gulf of Mexico by ExxonMobil—has also passed through all phases of the pipeline and progressed to the AzCATI outdoor testbed, where it performed almost as well as Scenedesmus obliquus UTEX393. The team will continue to evaluate that strain as they’ve found it to perform extremely well in a high-salinity growth medium created with an abundant source—seawater.

The team, which has signed on for another three years, will now test additional strains in its pipeline as well as growth-promoting molecules that will increase productivity.

Huesemann concludes, “By continuing to work as a cohesive and effective team for another three years and using each DOE national lab’s unique technical capabilities, our consortium is aiming to further increase annual biomass productivities and reduce the minimum biomass selling price to meet DOE’s target of $488 per ton, a point at which models that make many assumptions about overcoming biofuel R&D challenges indicate algal biofuels could be cost-competitive with existing fuels.”

The Motivation for Sustainable Aviation Fuels