Culprit Nabbed in the Death of a Catalyst 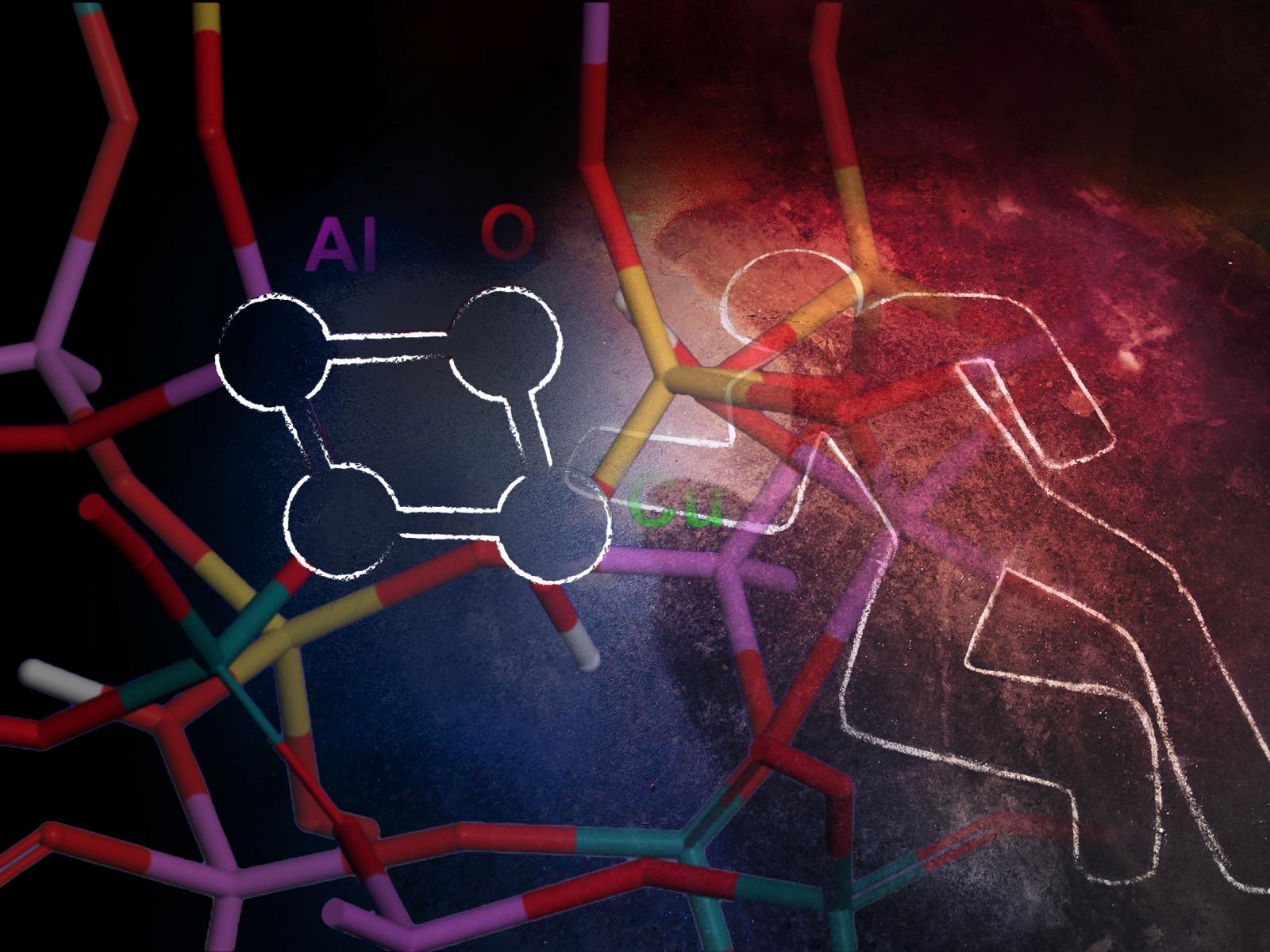 Several years ago, a relatively new catalyst for vehicle emission control began showing signs of trouble. Used to control tailpipe nitrogen oxides in diesel trucks, Cu/SAPO-34 catalysts slowly began to fail after a year or two, and no one could figure out why.

A team at PNNL has solved the mystery at last, finding that this seemingly suicidal catalyst wasn’t actually self-destructing but was the victim of an external assailant. Their paper, "Unraveling the mysterious failure of Cu/SAPO-34 selective catalytic reduction catalysts," has been published in Nature Communications.

Cu/SAPO-34 is a type of selective catalytic reduction (SCR) catalyst specially designed to reduce nitrogen oxide pollution in today's more fuel-efficient engines. Its inexplicable deactivation was the first challenge presented to staff scientist Feng Gao when he joined PNNL in 2011. He and colleagues examined both fresh and used samples of the catalyst, seeking a diagnosis for its failure.

"To make a long story short, we couldn't," Gao said. "We exhausted all characterization methods at our disposal, only to find out that fresh and deactivated catalysts were very similar in terms of their chemical and material properties."

Cu/SAPO-34's problems are linked to temperature: It remains stable above 100°C (212°F), but shows signs of damage below that threshold. That explains why Cu/SAPO-34 performed poorly in refuse trucks compared to long-haul ones, as Gao was told by European scientists working on the problem. The frequent start-stop operations for refuse trucks cause the SCR catalysts to run at lower temperatures than their long-haul counterparts, thus accelerating their rate of failure.

By 2014, the puzzling death of this catalyst had become a cold case. The PNNL team shifted their research focus towards Cu/SAPO-34’s rival, the much more stable SCR catalyst Cu/SSZ-13. But with the arrival of visiting Ph.D. student Aiyong Wang in 2016, curiosity prompted Gao and colleagues at PNNL to reopen the investigation. This time, Gao directed Wang to make a homegrown version of the catalyst, one much simpler than the industrial version.

The researchers forced this simple catalyst to degrade with heat and humidity, as one normally would do for such an experiment. But they also let some of it sit untouched for eight months to see what would happen, noticing something remarkable.

"This simple, model catalyst seemed to ‘commit suicide’ just sitting on the shelf in the lab," Gao said.

The researchers analyzed the samples with 2-dimensional pulsed electron paramagnetic resonance, a technique that isn't typically used on industrial catalysts. This combination of factors—a simplified version of the catalyst, the shelf-based degradation, and the unusual spectroscopy technique—helped reveal that the deactivation was not a suicide but rather a murder, with water as the culprit. Unfortunately moisture—up to 10 percent—exists in all engine exhausts.

"When we looked at the dead catalyst and compared it with the fresh one, we found that the  active copper sites were pretty much all gone, and the SAPO-34 support was also severely damaged," Gao said.

The copper in Cu/SAPO-34 needs to remain in the so-called “ion-exchanged cationic positions” in order to do its job. To ensure that the catalyst is long-lasting, the SAPO-34 support should also remain highly crystalline during its lifetime. Obviously, water didn’t show mercy to either. The picture below illustrates the catalyst prior to and after the water attack. 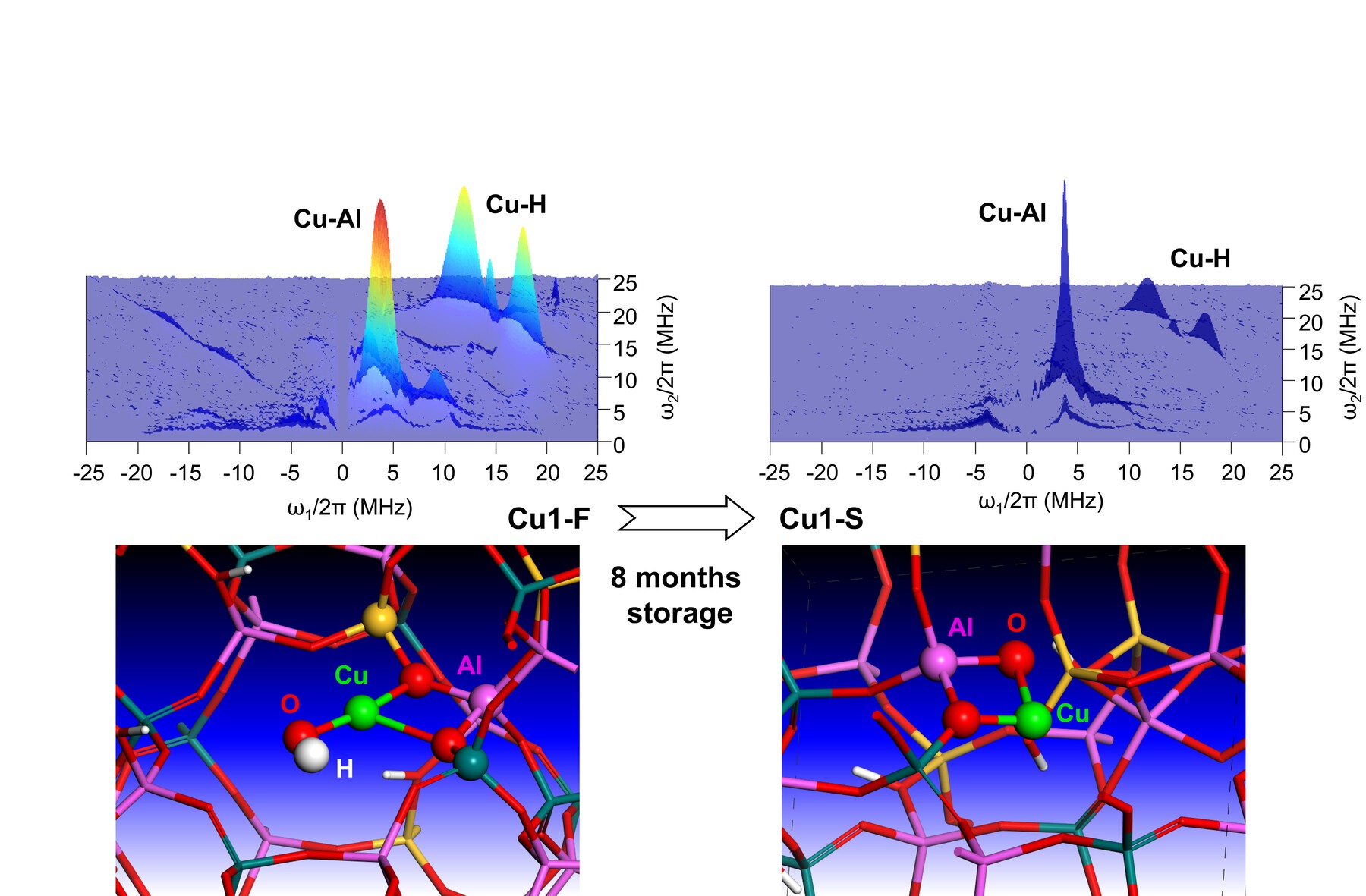 In the upper left panel, strong Cu signals are detected by 2-dimensional electron paramagnetic resonance for the fresh Cu/SAPO-34 catalyst. However, for the deactivated one, 90 percent of the Cu signals are lost, as evidenced from the spectrum shown in the upper right panel. Through density functional theory simulations, the researchers provided detailed pathways for how Cu is repositioned from its SCR active location (lower left panel) to its SCR inert location (lower right panel).

The study finally pinpointed the problem with Cu/SAPO-34, but the solution remains an open question. One idea would be to optimize the structure of the catalyst by loading it with more copper. Another would be to somehow make it more water repellent at room temperature.

Cu/SSZ-13 catalysts, and the newly developed Cu/LTA catalysts, can do the same job as Cu/SAPO-34, Gao noted, but they are more expensive.

"If this low-temperature instability issue is solved," he said, "then Cu/SAPO-34 might be able to compete in the market again."

This research was funded by DOE’s Vehicle Technologies Office.