Advancing a more collective understanding of coastal systems dynamics and evolution is a formidable scientific challenge. PNNL is meeting it head on to inform decisions for the future 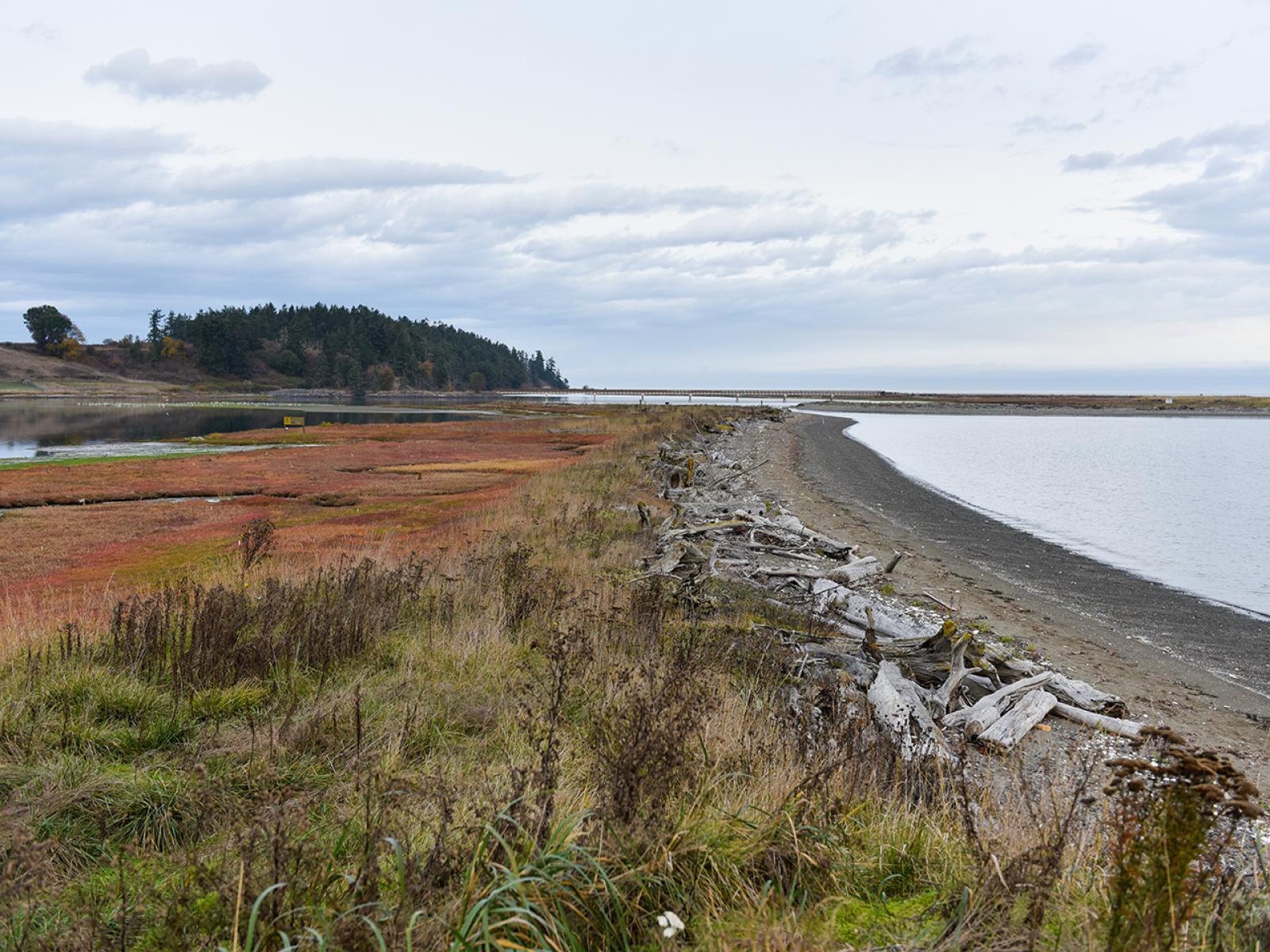 PNNL researchers are taking a closer look at the connections between water, human development, and what to expect.

With water covering more than 70 percent of the Earth’s surface, it’s no wonder our planet is nicknamed the Blue Marble. Seen from outer space, our marble is interwoven with swirls of clouds and splotches of land defined by coastlines—372,000 miles worth.

Zoom in on the marble and you’ll see the coastlines intersecting countless rivers and streams. You’ll also see the concentration of coastal cities, including many of the world’s largest and smallest. Coastal zones account for nearly half of our global population and host the infrastructure that drives a global economy.

Were you to zoom even further into these land-water intersections—beyond what the naked eye can see—you’d find a bustling community of tiny organisms that filter both nutrients and contaminants to keep our planet healthy.

Such is the scope of Earth’s terrestrial-aquatic interface, a dynamic global ecosystem that changes with the tide, the seasons, human development, and increasingly, climate.

“Coastal regions are experiencing a wide range of hazards and stresses, including sea level rise, extreme weather events, erosion, aging infrastructure, and ecological degradation,” said PNNL scientist Ian Kraucunas. “Human activities, especially the expansion of the built environment and other land-use changes, drive changes in coastal zones that can be as important as shifts in the natural system.”

PNNL scientists are working to better understand the natural and human triggers that affect the resiliency of this increasingly vulnerable, interconnected, and important system. It’s a huge undertaking—evident in dozens of presentations by PNNL scientists at this year’s gathering of the American Geophysical Union—and it starts with the long view.

Scientists are embarking on a new project for the U.S. Department of Energy that targets some of the biggest uncertainties in projecting the evolution of coastal environments. The Integrated Coastal Modeling project, led by Kraucunas, focuses on developing and integrating computational models that can simulate coastal processes.

Which leads us to human development. Seaside condominiums, resorts, and skyscrapers are juxtaposed with fishing communities, military harbors, and shipping centers, not to mention the roads, subways, and electric infrastructure that connects it all.

Now add in Mother Nature, with influences from the atmosphere, oceans, wind, and precipitation patterns. These patterns affect where and how much water falls and whether it falls as snow or rain or turns into a hurricane. These interactions determine how organisms interact within their environment, including where people choose to live.

To understand how coastal communities may evolve in the face of climate change, researchers must consider human development along with aquatic processes from upland areas and river shorelines to floodplains and the open ocean. All these processes occur across a range of space and time scales, making it difficult to simulate with computer models—a challenge PNNL is addressing.

The effort initially focuses on the U.S mid-Atlantic region, which has experienced severe impacts from extreme weather events with increasing frequency over the past several decades. The project aims to deliver a robust predictive understanding of coastal evolution accounting for the complex, multiscale interactions among physical, biological, and human systems.

What to Expect: Extreme Events

The U.S. coastal property market, including public and private infrastructure, has an estimated value of about one trillion dollars. Population growth continues to increase the size of our cities, including in coastal and near-coastal areas. Yet stressors from both natural and human systems result in billions of dollars in losses each year. Sea levels continue to rise, and extreme weather events, including heavy precipitation, storm surges, high tides, and winds are projected to increase in frequency and intensity. And in the background, our public infrastructure—electric power, water, and transportation systems—continues to evolve.

PNNL researchers led by David Judi are characterizing the impact and risk of extreme events on human systems. For example, how will future flooding levels affect our urban building stock? What impact will sea level rise, coupled with tropical cyclones, have on our public infrastructure?

Using integrated, multiscale models of both natural and human systems, the research links hazards with consequences to quantify risk in coastal urban areas.

Greenhouse gases, such as methane, trap heat in the atmosphere and influence global climate processes. While cows take most of the rap on methane, the gas bubbles up from any environment where microbes munch on decaying organic matter.

A PNNL research team led by Nick Ward is looking at different terrestrial and aquatic ecosystems to better understand where methane is coming from under evolving conditions. Most prior studies focused on terrestrial soils and freshwater ecosystems, because methane emissions were assumed to be lower at the coasts, where seawater inhibits methane production. New research shows that this assumption may not be true.

Researchers have found high amounts of methane deep within coastal soils. Transported by water during extreme high-tide flood events, this methane eventually reaches the atmosphere. As sea levels continue to rise, this phenomenon may result in a net increase in methane emissions from watersheds.

Small rivers and streams meander across only a small percentage of Earth’s surface area. Yet these waterways and dynamic shorelines play a critical role in cycling carbon and nutrients through soil, plants, and the atmosphere.

In fact, compared to much-studied and modeled large river deltas, small tidal streams are more tightly linked with the surrounding land. And there are a lot more of them—hundreds and hundreds more. Imagine all the places where water meets land as hot spots of ecosystem activity—that’s a lot of action.

Jerry Tagestad leads a team of researchers who question the perception that large river deltas dominate coastal processes. Their aim is to fill the gaping hole in climate models to include small tidal streams and their role in sediment resettling, flood control, and other ecosystem services, especially in the face of rising sea levels.

Advancing a more collective understanding of coastal systems dynamics and evolution is a formidable scientific challenge. PNNL is meeting the challenge head on to inform decisions for the future.