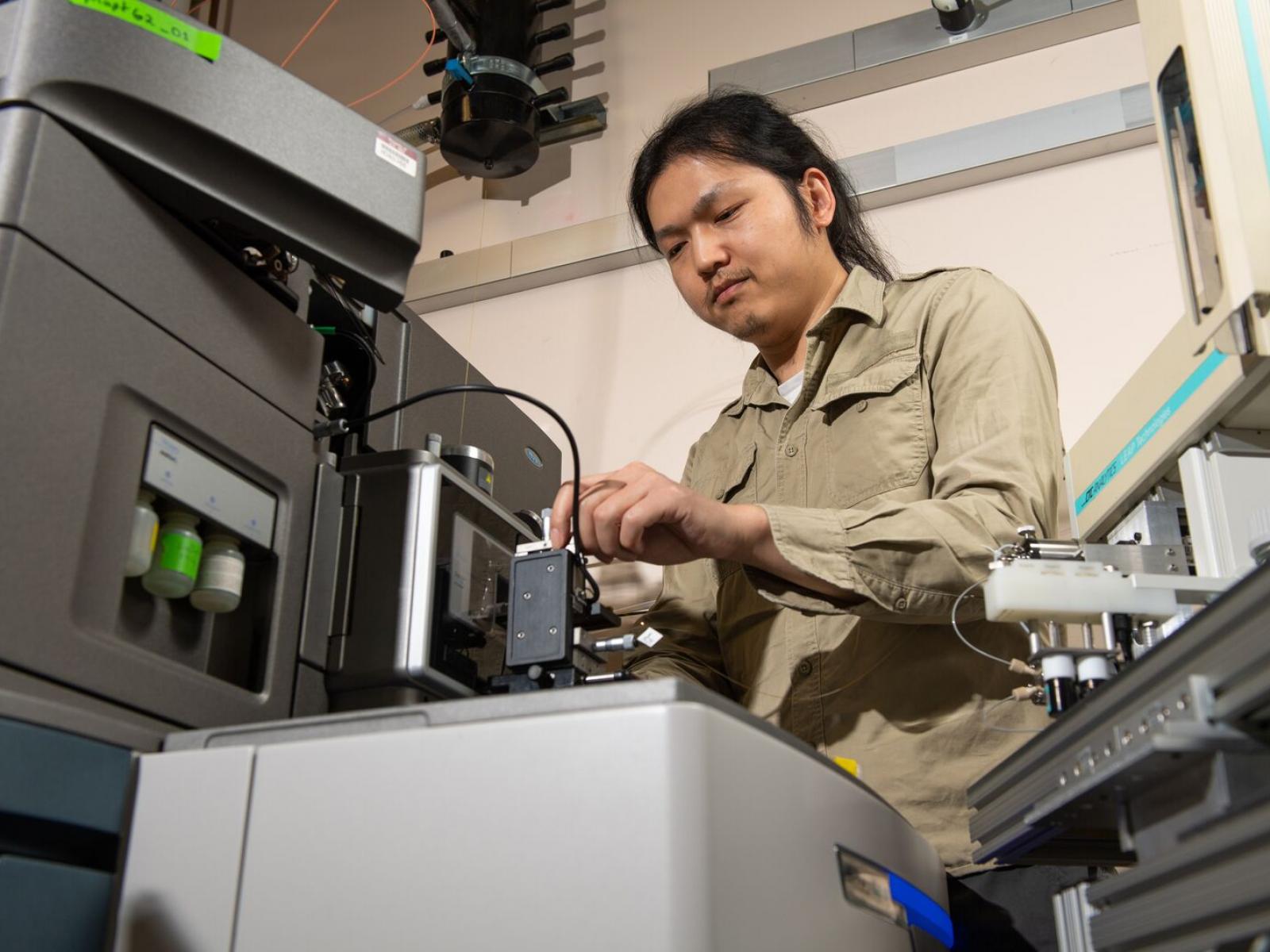 Mowei Zhou, a PNNL chemist, was invited to present his latest research findings at the ACS Spring conference using a convergence of emerging and traditional spectrometry techniques to discover new proteins in a plant with potential to transform biofuels production.

Protein discoveries from innovative mass spectrometry approaches will be shared in a talk at the ACS Spring conference that takes place March 20–24.

Mowei Zhou, a chemist at Pacific Northwest National Laboratory, was invited to discuss his latest research findings using a convergence of mass spectrometry techniques to discover new proteins in a plant with the potential to transform biofuels production.

Emergence of top-down and native spectrometry

Proteins are critical structural and functional components of all biological organisms, but there are many proteins with unknown functions that have yet to be fully mapped. Sometimes mapping the full structure of these proteins and native protein complexes can prove to be challenging due to their complexity.

For decades, scientists have used a technique known as bottom-up proteomics with mass spectrometry to identify new proteins and analyze their structure. The bottom-up technique, however, can leave gaps in information gathered about the protein’s full structure. The technique requires the slicing of proteins into small segments called peptides using an enzyme-based chemical process before analysis. When piecing these components back together, not all information needed to complete the full protein picture may be present.

That is why Zhou and his team are developing better measurement techniques to study the function and structure of proteins using two emerging forms of mass spectrometry—top-down and native mass spectrometry.

Unlike the bottom-up method, top-down mass spectrometry involves measuring the fully intact protein, or the “top” part of the top-down sequencing. And similarly with native mass spectrometry, researchers can study proteins in their intact form. But instead of analyzing individual proteins, it allows them to analyze their “native” and active form, typically involving complexes among several proteins.

Zhou and his team have shown that combining top-down and native mass spectrometry with the bottom-up approach can help reveal a more complete picture of protein structures and therefore help identify new proteins and their interactions. These discoveries have impacts for designing and engineering proteins precisely at the molecular level for biofuels development, pharmaceuticals, and more.

Zhou said before his team’s research, there were some related studies from other people in the field suggesting the link of proteins to the cell wall structure, but further exploration was necessary to understand the molecular mechanisms.

By better understanding the structure and formation of the proteins that help form the cell wall and therefore lignin in the plant, Zhou said the eventual goal is to infer more information about degrading lignin for use in biofuels. As part of his team’s study, and using publicly available transcriptome and genomic data from closely related species, Zhou and his team were able to identify 14 proteins that are generally considered to be associated with either dirigent protein function or the cell wall.

Paired with these discoveries, Zhou and his team also made a serendipitous discovery of several homolog proteins that were not identified before. Homologs are similar proteins related to the base protein—they came from the same ancestor.

“They are similar in structure, but they perform a different activity,” he said. “Plants can have a variety of different homologs and there are a lot of unknowns—it is not easy to predict what they do.”

Zhou said homologs can bind to each other and form heterocomplexes. Proteins, he said, don’t function by themselves—they form protein complexes. Using the native mass spectrometry method, they were able to detect that important protein interaction in Forsythia × intermedia.

“This work still needs a lot of validation, as we are still in the discovery phase,” he said. “There are a lot of homologs present in the plant, but not many studies are out there to understand what their functions are … We are continuing the work along this line to try and purify those proteins from different plants and make those proteins in the lab.”