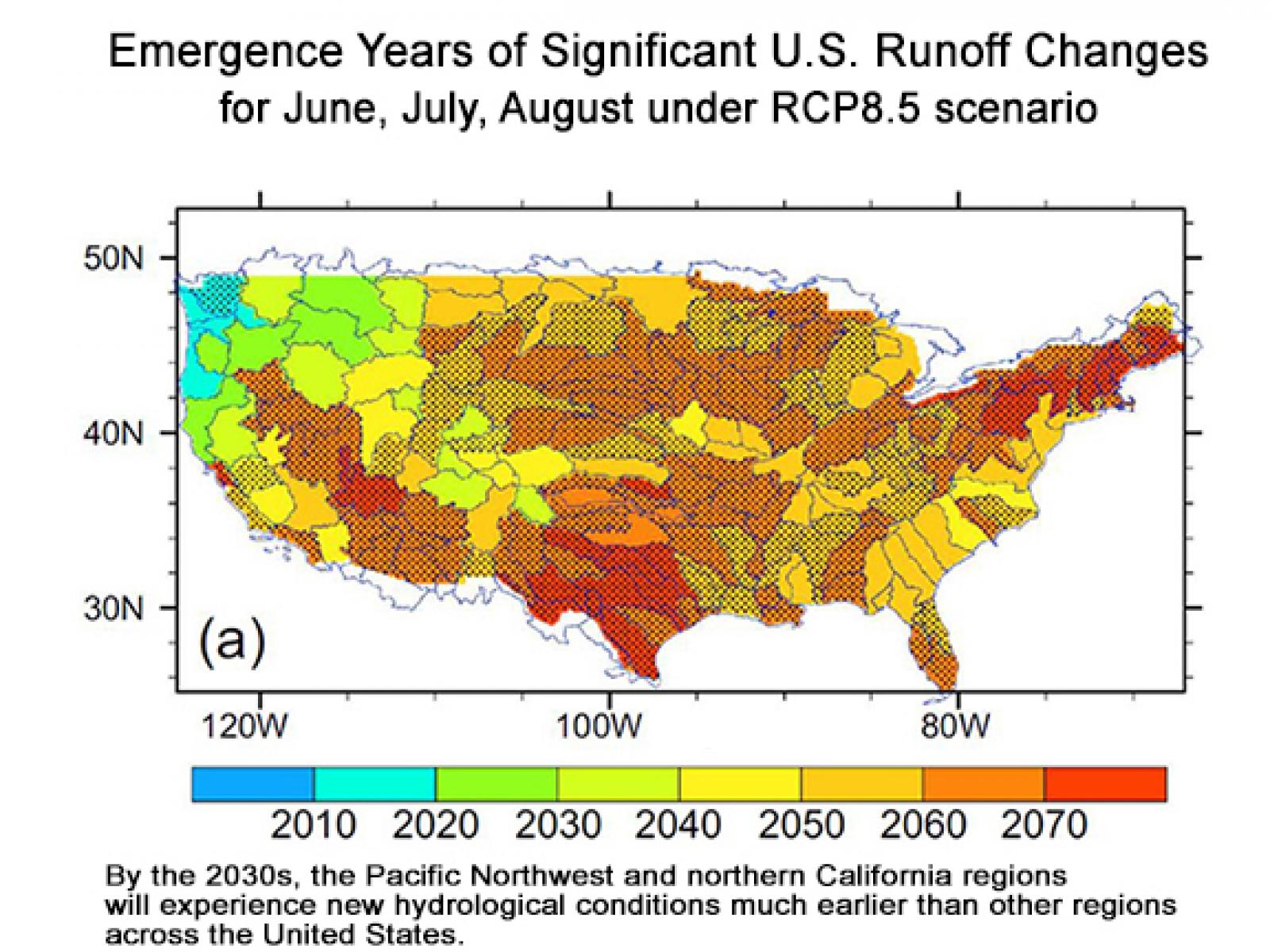 Future climate change projections often focus on the average impacts over time or space, or target changes in extreme climate events. But when it comes to understanding changes in water, consider the probabilities.

Results: Seattle is rainy and cloudy, Phoenix is hot and dry. These are climate "normals" assumed by most Americans. Scientists at Pacific Northwest National Laboratory found that almost half of the USA's lower 48 states are likely to experience significant changes in those assumptions caused by ‘new normals' in surface water systems by the end of the 21st century.

The researchers linked what they describe as new 'hydrologic regimes' directly to global temperature scenarios—a kind of 'what if' in possible warming conditions based on climate projections. They found that the amount of global warming is a good indicator for understanding surface water system changes. In their projections, a 1o Celsius (1.8o Fahrenheit) increase in global average temperature results in about 11 percent to 17 percent more land surface experiencing new water system ‘normal' conditions. Under further analysis, they found this emergence of new ‘normals' is mainly influenced by the changes in variability—the extremes and seasonality—rather than a shift in the average.

"By the 2030s in our study, we show the Pacific Northwest and northern California regions will experience new hydrological conditions much earlier than other regions across the United States," said corresponding author Dr. Maoyi Huang, hydrologist and land surface modeler at PNNL. "And associated with these changes in what we call ‘hydrological regimes' is a substantial increase in low and high extreme flow events."

Why It Matters: People evolve and adapt in reaction to what they experience and what they see changing. We develop new technologies and soon millions are carrying a smart phone in their pocket. These are changes we can see in our lifetimes. But what about changes we can't easily notice? Researchers in this study tackled this question: as global warming is fueling the frequency and severity of floods, droughts, and other water system changes around the world, is this a new 'normal' that we should expect?

People have come to expect certain weather and climate signatures for their own region. When it deals with water, it's what hydrologists call "hydrologic regimes."  But what if global warming is creating new regional signatures? Scientists in this study wanted to check it with that point of view, and then project what a future might hold under specific climate warming scenarios. Understanding how climate change is affecting key resources like water will help inform decisions about how society should adapt to those changes.

"Significant changes in the full distributions indicates the emergence of new hydrology regimes," said Dr. Guoyong Leng, lead author and hydrologist at PNNL. "This wide-ranging change could present greater challenges to water management than changes in a single moment of the distribution."

Methods: The team analyzed runoff projections from the Variable Infiltration Capacity (VIC) hydrological model which was driven by 97 climate projections that were statistically downscaled to 1/8 degree resolution and bias-corrected Coupled Model Intercomparison Project Phase 5 (CMIP5) climate projections over the contiguous United States (CONUS). The team used a statistical technique based on the two-sample Kolmogorov-Smirnov  test to detect the 30 year time window in which the summer and winter surface runoff in each sub-basin would shift to a new ‘regime' compared to historical conditions during 1970-1999.

Further, the team designed several pseudo scenarios to drill down to other statistical changes, as in the distribution to the mean, variance, skewness, and other higher order statistical moments. They found the appearance of new runoff regimes is typically dominated by changes in variability—rather than shifts in the average—and that these runoff changes are driven by an increase in the year-to-year variability of precipitation or temperature in most climate change scenarios.

What's Next? The authors  are now evaluating how water management ( e.g., reservoir operation, irrigation) might change the new hydrological 'regimes' across the contiguous United States, and how the energy system (i.e., hydro-power production) might be influenced by such changes. The hydro-climatic scenarios are also serving as important boundary conditions for evaluating impact and vulnerability of  local-scale ecosystems and infrastructure, such as those along the Columbia River shoreline, under future climate change. 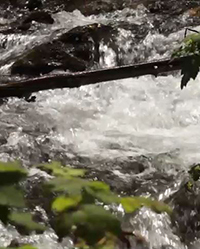 Watch a video abstract about the study.(Will open on the journal's site. Turn sound on.)