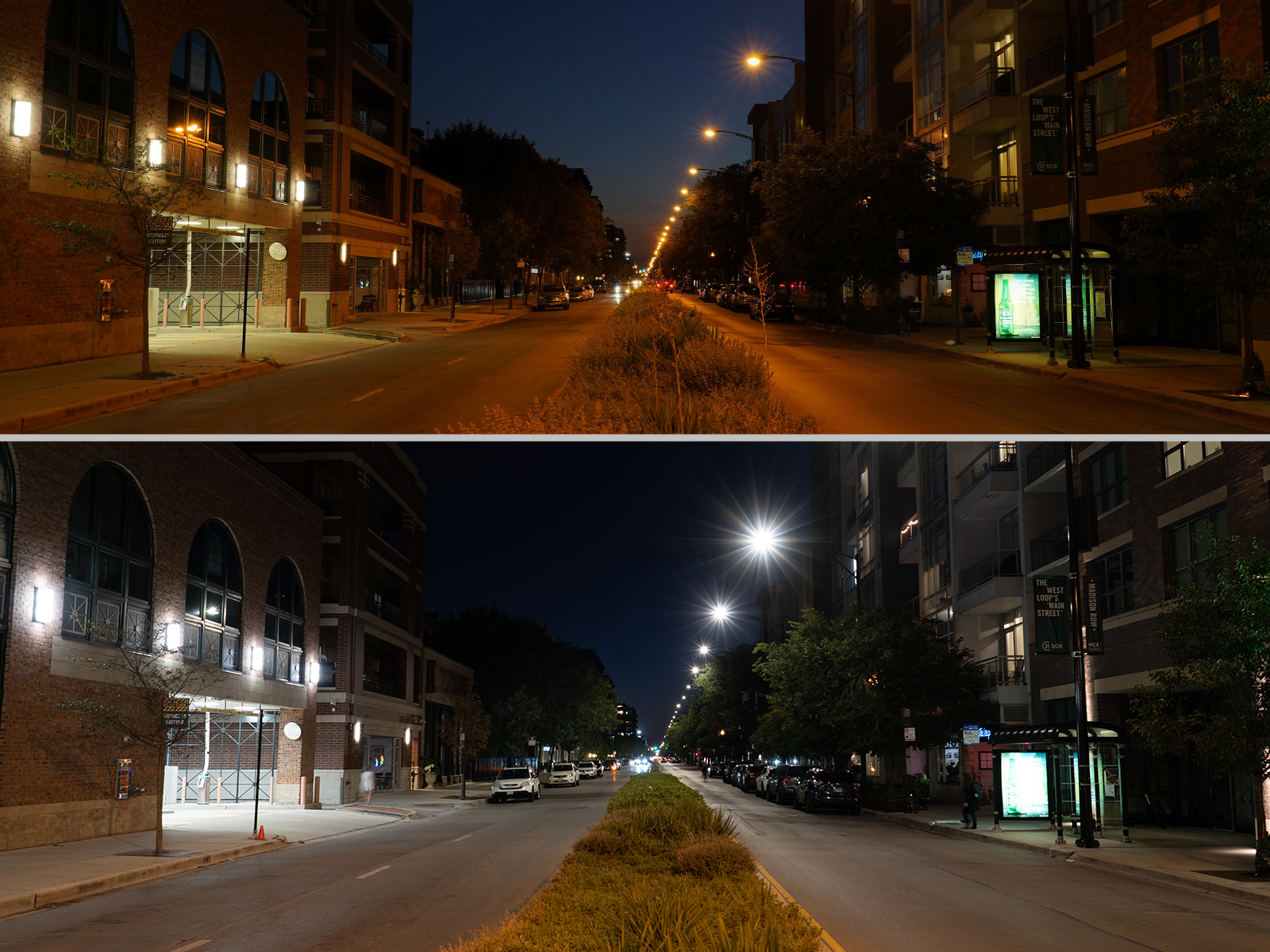 A Chicago street before (top) and after (bottom) the lighting upgrade. The LED lighting conversion effort is expected to improve public safety by providing better illumination as well as create a lighting system that lasts longer and is easier to maintain.

CHICAGO—The city of Chicago has replaced 210,000 street lights with state-of-the-art LEDs, completing the replacement of nearly three quarters of the 270,000 streetlights Chicago seeks to convert through its energy-efficient street lighting initiative, the Chicago Smart Lighting Program.

When the campaign ends in 2021, Chicago will have converted the bulk of the nation’s largest municipal street lighting system to LEDs, which require less maintenance and use less than half the electricity of the previous high-pressure sodium lighting fixtures. Together, these improvements should cut Chicago’s streetlight energy bills by $10 million each year.

Chicago has been working with the Pacific Northwest National Laboratory’s Advanced Lighting Team, with funding from the U.S. Department of Energy’s Building Technologies Office, since the city’s campaign began in 2014. At the outset, PNNL lent its technical expertise to the team led by the Chicago Department of Transportation to help identify the best lighting technology and field validation approaches to Chicago’s outdoor lighting modernization effort. Chicago is in the third year of its four-year initiative, on track to reach the goal of 270,000 new lights by 2021.

Shining a light on technologies

“We previously had a role in helping major cities like Boston, Los Angeles, New York City and Seattle convert their street lighting systems to much more energy-efficient LED technology,” said Bruce Kinzey, PNNL lighting expert and past director of DOE’s Municipal Solid-State Street Lighting Consortium. “When Chicago expressed interest in going down a similar path with its huge lighting system, we were all in favor and wanted to help.”

Chicago was also interested in improving reliability and maintenance of the streetlights by installing networked remote monitoring and lighting control technology across the entire system.

“Deploying the networked monitoring and control technology was something no other city had attempted at this scale,” said Michael Poplawski, lead of PNNL’s Connected Lighting Program. “We knew if Chicago was successful, it would significantly advance adoption of this technology by other cities.”

With 270,000 of its 325,000 street light fixtures marked for conversion, Chicago understood that its number of lights, combined with its aging electrical infrastructure, would be a massive undertaking with significant risks, such as getting a networked system of this size up and running. They enlisted PNNL’s expertise to better understand this technology and navigate the wide web of manufacturer claims.

“Our team helped the city with its request for information and proposal processes so that they could explore all of the technology options available to them,” said Poplawski. “And because the city wanted to be rigorous in evaluating the technologies so it could receive the best return on investment, we worked closely with a city team to provide technical insight that informed city officials to make best overall value decisions based on sometimes competing project objectives.”

“PNNL provided us with the technical expertise and performance metric parameters we were looking for so we could have a complete understanding of the trade-offs,” said George Marquisos, former managing director of Chicago Infrastructure Trust, which assists the city in providing alternative financing and project delivery options for transformative infrastructure projects. “Chicago is truly grateful for all the help DOE has provided to this project.”

After a thorough review and procurement process, the city selected energy-efficiency solution provider Ameresco as its partner for the project.

“PNNL provided us with the technical expertise and performance metric parameters we were looking for so we could have a complete understanding of the trade-offs.”- George Marquisos

Once the city selected its vendor, the Chicago Smart Lighting Program continued its engagement with the PNNL team as the project moved into deployment. PNNL helped to evaluate the program and solve technical challenges, such as system interoperability.

The LED lighting conversion effort is expected to improve public safety by providing better illumination. The new lighting system should also last longer and be easier to maintain.

The city is already sharing preliminary data from the new citywide wireless lighting management system with the PNNL team, which is exploring how reported energy data could be used in the future to deliver accurate estimates of energy consumption to the city and its electric utility company. The team is also investigating how the data can be used to identify—and even predict—conditions that lead to lighting outages.

“This data is allowing us to plan studies that explore potential issues and possibilities that can’t be realistically evaluated in a lab setting,” said Poplawski. For example, a review of data records from a large number of devices over an extended period of time has revealed that data from some devices can sometimes become corrupted or go missing. PNNL has been studying how often this occurs and exploring what impact this might have, if any, on specific uses for the data.