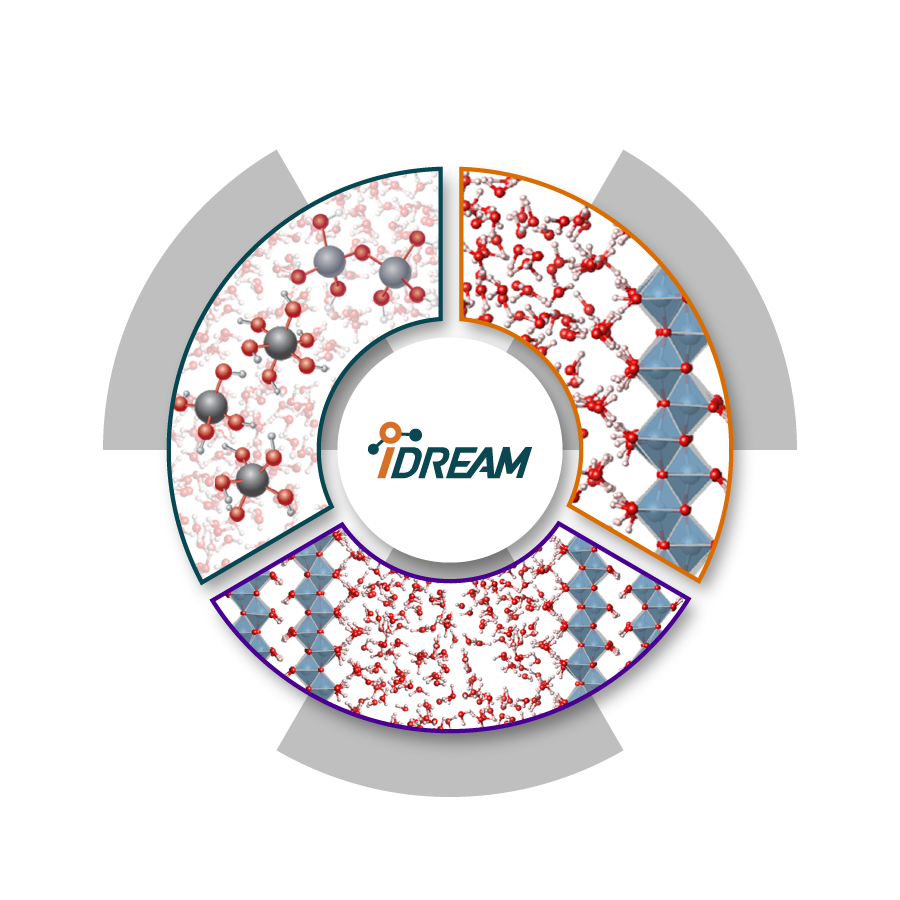 catalyst: material that allows a reaction to proceed at a faster rate but does not influence the final products. An approach to dealing with slow reactions is to include a catalyst. Many catalysts are metals, metal oxides, or other metal complexes, such as titanium dioxide (TiO2) and ruthenium(IV) oxide (RuO2). (DOI: 10.1002/9780470687123.ch6

complex: a substance formed by the union of simpler substances, such as compounds or ions, and held together by electrochemical forces (such as covalent bonds, ionic bonds, etc.). (Encyclopedia Britannica

dynamics: the study of forces and their influence on the motion of particles.

electrical potential: the amount of work needed to move a single charge from an infinite distance away to a reference position inside an electric field. The electric field is due to the presence of electric charges (positive or negative). (ISBN: 0321581741 9780321581747

electrodynamics: the study of the interaction between moving charges in electric and magnetic fields. (Nature website

electrolysis: a nonspontaneous chemical reaction involving the movement of electrons (oxidation-reduction) that is brought about by the passage of current under a sufficient external electrical potential. (ISBN: 0321581741 9780321581747

to accelerate transformative discoveries by combining the talents of the national scientific workforce with a new generation of tools for understanding and manipulating matter on the atomic and molecular scales. IDREAM is an Energy Frontier Research Center. (DOE Office of Science

Hanford Site: location where two-thirds of the nation’s plutonium was produced during World War II and the Cold War. It houses 177 underground storage tanks containing 56 million gallons (211 million liters) of mixed radioactive and chemical waste from the processing of irradiated fuel for the recovery of plutonium. Plutonium production ceased and cleanup began in 1989 under the direction of the Department of Energy. (DOI: 10.1021/acs.est.7b04077

hazardous waste: nonradioactive waste such as metals (aluminum, potassium, etc.) and other compounds that pose a risk to the environment and/or human health. Hazardous waste makes up roughly 19 percent of Hanford's total waste volume. (PNNL 1995

high-level radioactive waste: highly radioactive material, usually containing traces of uranium, plutonium, and other long-lived radioactive elements. High-level waste makes up about 1 percent of Hanford's total waste volume but is primarily responsible for dangerous radiation exposure levels (up to 10,000 rad per hour in some tanks). (PNNL 1995

hydrodynamics: the study of fluids in motion. Hydrodynamics is often concerned with forces acting on solid bodies immersed in fluids resulting from the relative motions of the liquid around them. (DOI: 10.1017/CBO9780511608810

hydroxide: OH; an oxygen atom covalently bonded to a hydrogen atom to produce a negatively charged ion (anion). Hydroxides are a natural constituent of water and often function as ligands. (PNNL 1995

microstructures: a grouping of atoms or molecules into micron-sized arrangements. Microstructures are often considered as the next step after nucleation in the molecular aggregation process.

non-Newtonian fluid: a liquid where the apparent viscosity results from both flow conditions (geometry, shear rate, etc.) and the time-dependent force applied to the fluid (the kinematic history). Unlike fluids such as pure water or honey, non-Newtonian fluids have a nonlinear relation between shear stress and shear rate, meaning they exhibit a blend of viscous fluid behavior and of elastic solid-like behavior. A classic example of a non-Newtonian fluid is a mixture of cornstarch and water, which behaves like a solid under high force but flows like a liquid under low force conditions. The understanding of such behaviors is important for movement of material, where the higher the viscosity of a substance, the more resistance it presents to flow. (RheoSense website

oxidation: the process in which a substance loses one or more electrons, which gives the substance a more positive electrical charge. The term is derived from oxygen, which is a common element that tends to pull electrons off other atoms (thereby reducing itself in the process). Oxidation and reduction occur together in an oxidation-reduction (or redox) reaction. (Brown et al. 2006. Chemistry: The Central Science, 10th edition, Pearson Education, Inc. Upper Saddle River, NJ.)

oxidation number (oxidation state): a bookkeeping system that tracks the number of electrons (that is, charge) gained or lost by an atom. Transition metals are often shown with their oxidation state written in Roman numeral notation. For example, the Roman numeral IV in ruthenium(IV) means the metal is in its fourth oxidation state with a charge of +4 relative to its neutral elemental state. (Brown et al. 2006. Chemistry: The Central Science, 10th edition, Pearson Education, Inc. Upper Saddle River, NJ.)

reactivity: the rate of change for complexes, where charge and size are key factors. Experimental observations of reactivity allow us to define, for example, the rate at which metals participate in reactions. (DOI: 10.1002/9780470687123.ch6

reduction: the process in which a substance gains one or more electrons, which gives the substance a more negative electrical charge. The term is derived from the fact that the charge is reduced. Oxidation and reduction occur together in an oxidation-reduction (or redox) reaction. (Brown et al. 2006. Chemistry: The Central Science, 10th edition, Pearson Education, Inc. Upper Saddle River, NJ.)

rheology: the study of the deformation and flow of matter. (Barnes et al. 1989. An Introduction to Rheology, Elsevier, Amsterdam, The Netherlands.)

slurry: a dense suspension of close-packed solid particles in water. The volume fraction of solid material is usually around 20 to 30 percent (versus a colloidal suspension, which contains less than 20 percent solids by volume). Slurries do not obey a simple linear relationship between applied stress and flow (that is, they exhibit non-Newtonian fluid behavior). (Morrow Repair Services

tank waste (Hanford Site): mixed levels of radioactive waste left over from the production of nuclear materials and stored in underground tanks. Hanford's 177 tanks contain 56 million gallons (211 million liters) of waste. The waste exists in extremely complex mixtures of solids, slurries, and very high pH solutions that have been exposed to ionizing radiation for many decades. (DOI: 10.1021/acs.est.7b04077