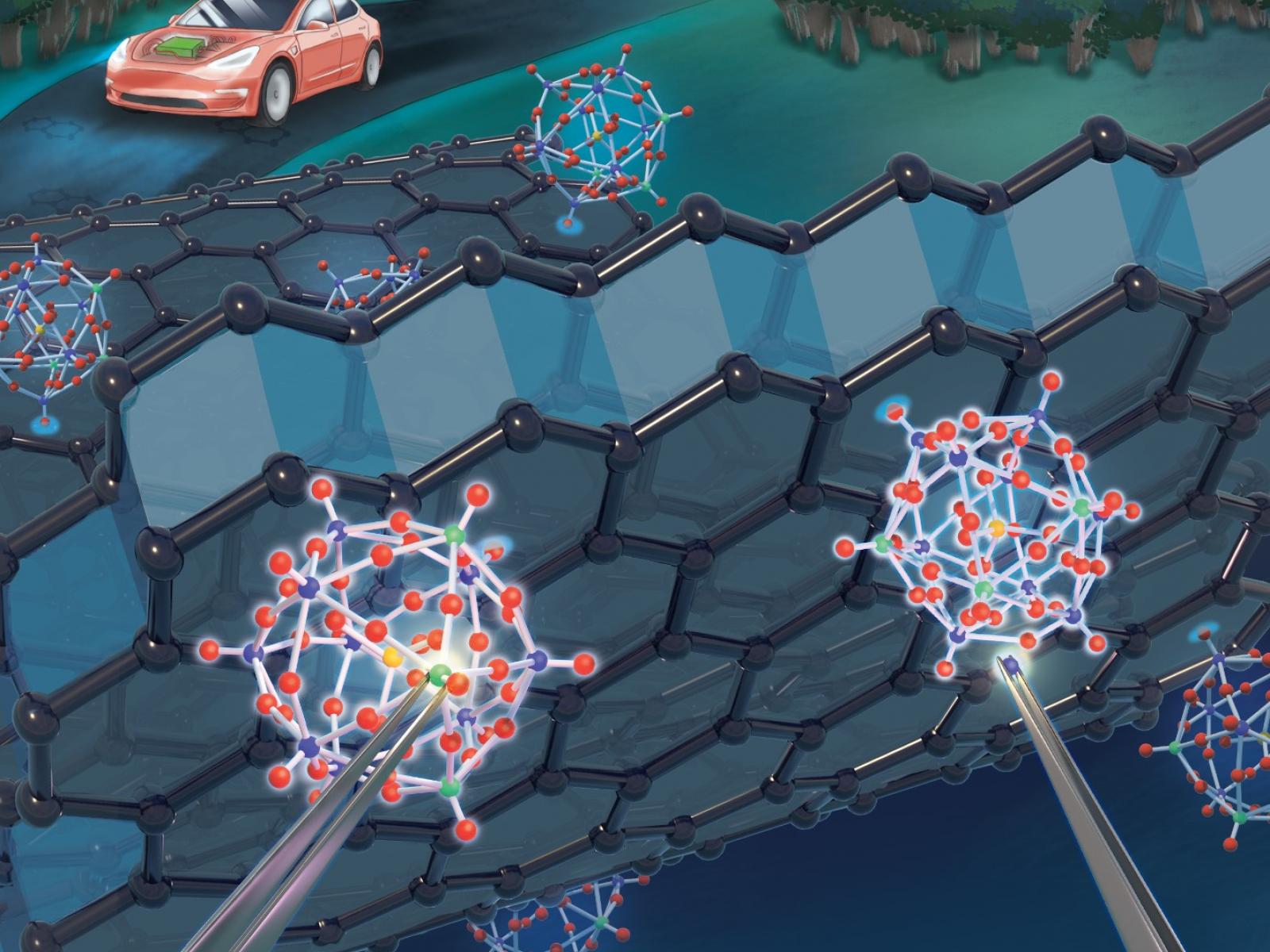 The image illustrates the effect of “atom-by-atom” metal substitution on the electrochemical properties of well-defined redox-active anions. The fundamental insights obtained from this study were translated to develop high-performance electrochemical interfaces using super-active anions that cannot be isolated using conventional techniques.

Researchers working within PNNL’s Separations Science program succeeded in coupling a highly controlled way of modifying surfaces, called ion soft landing, with a PNNL-designed and built electrochemical cell to achieve precise control over the chemical composition of complex interfaces. Once achieved, this allowed them to make atom-by-atom changes to electrodes to study the effect on performance and stability. The experiments, combined with theoretical calculations by collaborators in Spain, were published in an ACS Nano article titled “Controlling the Activity and Stability of Electrochemical Interfaces Using Atom-by-Atom Metal Substitution of Redox Species.” They revealed that substitution of only one to three tungsten atoms by molybdenum atoms in complex metal-atom clusters resulted in a pronounced improvement in their electronic behavior, which controls how efficiently these species accept electrons for separation applications.

In electrochemical devices used for separations, the interfaces are complex. A lot is going on at once as electroactive ions, solvent molecules, and supporting electrolytes interact, exchanging electrons and mass during charge transfer processes. To understand these processes, it is necessary to decouple the different charge transfer and ionic interactions occurring on electrodes. In this study, the researchers did just that, and further, exerted control over the process by tuning electrodes at the atomic level.

“The atomically precise insights obtained from our experiments and theoretical calculations allowed us to develop efficient electrochemical interfaces using super-active anions that would not have been identified using conventional techniques that sample heterogeneous mixtures,” said PNNL chemist Venkateshkumar Prabhakaran, lead author of the study. “This approach can be widely adopted to study electrochemical interfaces in other related technologies, which may assist the nation’s future needs in chemical separations, energy generation, and storage.”

The researchers are now studying how to modulate the efficiency of separating different ions in solution using well-defined electrodes with precisely controlled-anions and membrane layers. The fundamental insights gained in understanding molecular-level electrochemical interfaces may serve as a foundation for designing superior electrodes for separations, or even energy storage, at the device scale.

This work is supported by the Separations Science program and is tied to the DOE BES grand challenge “How do we characterize and control matter away - especially very far away - from equilibrium?” It also demonstrates a unique approach to address the following PRDs: (1) “Understanding and Controlling Chemical and Physical Processes at Interfaces” (BRN for Environmental Management); (2) “Create innovative experimental methods for investigating “Real-World” Systems” (BRN for Innovation and Discovery of Transformative Experimental Tools); (3) “Control and exploit the complex interphase region formed at dynamic interfaces” (BRN for Next Generation Electrical Energy Storage).

This experimental work was supported by the U.S. Department of Energy (DOE), Office of Science, Office of Basic Energy Sciences, Chemical Sciences, Geosciences and Biosciences Division. The theoretical work was supported by the Spanish Ministerio de Ciencia e Innovación (project no. CTQ2017-87269-P), the Generalitat de Catalunya (2014SGR199 and XRQTC) and ICREA foundation for an ICREA ACADEMIA award.

The research was performed using EMSL, a national scientific user facility sponsored by the DOE’s Office of Biological and Environmental Research and located at Pacific Northwest National Laboratory (PNNL).

Driving Down Carbon Capture Costs to $50.6 per Tonne