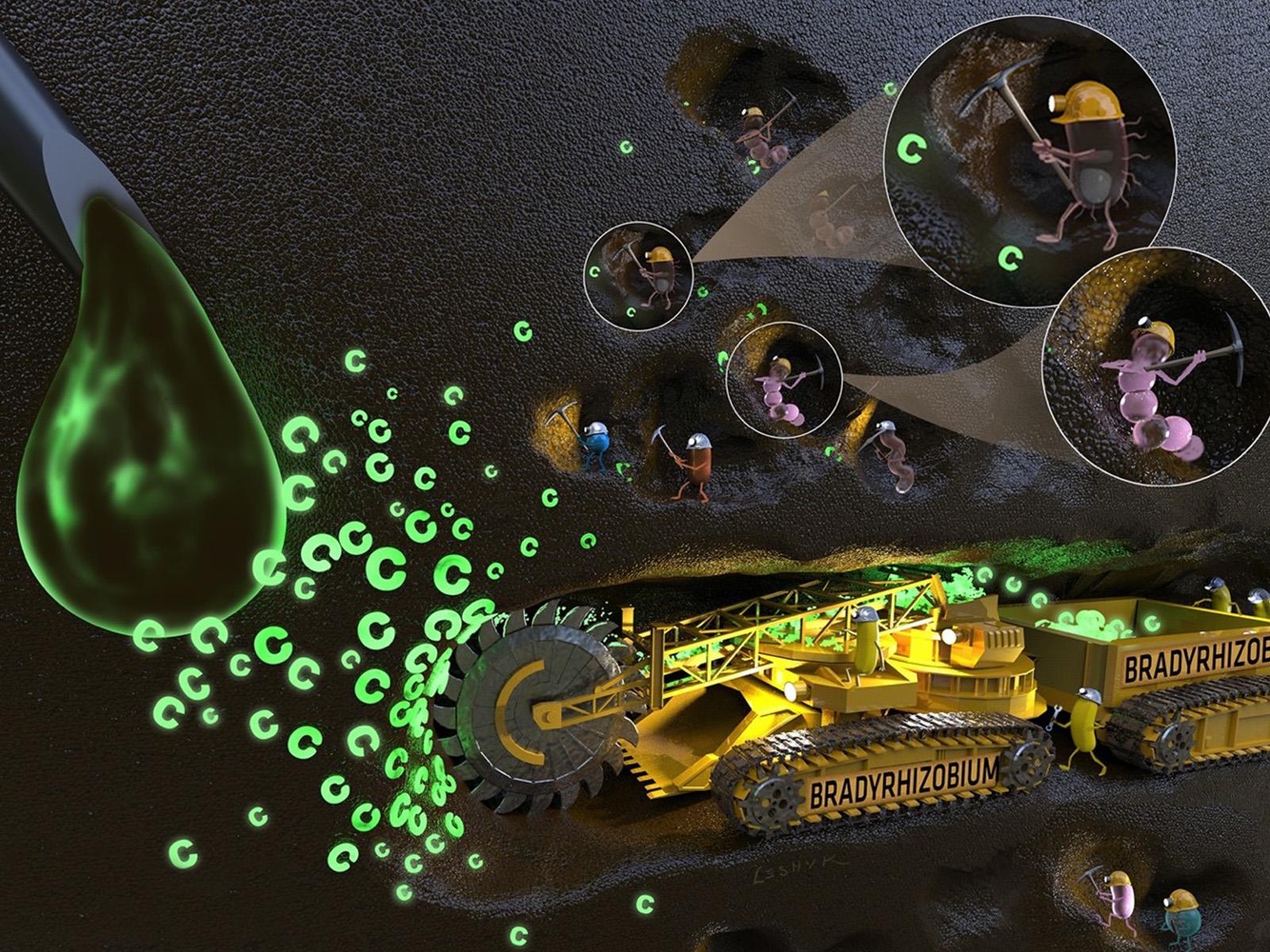 Bacterial "miners," shown in relief, work to process soil nutrients, some more efficiently than others. Bradyrhizobium, one of the three top nutrient processors identified in this new study, is shown consolidating its control of carbon (green C) from a glucose addition, processing the nutrients with industrial efficiency (in the form of a bucket wheel excavator).

Using a technique called quantitative stable isotope probing (qSIP), scientists can capture valuable demographic data about soil microbes: not just who is there, but who is using nutrients and growing. In a new qSIP study, a multi-institutional team found that just a few bacterial taxa in ecosystems across the planet are responsible for more than half of carbon cycling in soils. Despite the diversity of microbial taxa found in wild soils gathered from four different ecosystems, only three to six groups of bacteria common among these ecosystems were responsible for most of the carbon use that occurred.

Soil contains twice as much carbon as all vegetation on earth, so predicting how carbon is stored in soil and released as CO2 is a critical calculation in understanding future climate dynamics. By decoupling taxonomic from functional diversity, and learning which bacterial actors in a community are responsible for important ecosystem functions like carbon cycling, scientists can focus future research on these influential bacterial groups.

A team of scientists from Northern Arizona University and Pacific Northwest National Laboratory collected soil from four ecosystems in Northern Arizona. In the laboratory, they wet the soil with water labeled with special isotopes of oxygen. Then they sequenced DNA found in soil samples to identify the bacteria present. They also noted which bacteria taxa incorporated the oxygen isotopes into their DNA, a signal that indicates growth. Finally, the team accounted for the abundance of each taxon and modeled how efficiently bacteria consume soil carbon. The model that included taxonomic specificity, genome size, and growth predicted the measured CO2 release much more accurately than models that looked only at how abundant each bacterial group was. It also showed that just a few genera produced most of the observed CO2.

Those bacteria—Bradyrhizobium, the Acidobacteria RB41, and Streptomyces—were better than their rarer counterparts at using both existing soil carbon and nutrients added to the soil. When carbon and nitrogen were added, these already dominant lineages of bacteria consolidated their control of nutrients, gobbling up more nutrients and growing faster relative to other taxa present. Although the scientists identified thousands of unique organisms, and hundreds of distinct genera, only six were needed to account for more than 50 percent of carbon use, and only three were responsible for more than half the carbon use in the nutrient-boosted soil. This research provides insights for managing soil fertility, and for better representing key bacterial processes in Earth system and climate models.

This research was supported by the U.S. Department of Energy’s Biological Systems Science Division Program in Genomic Science and the National Science Foundation.