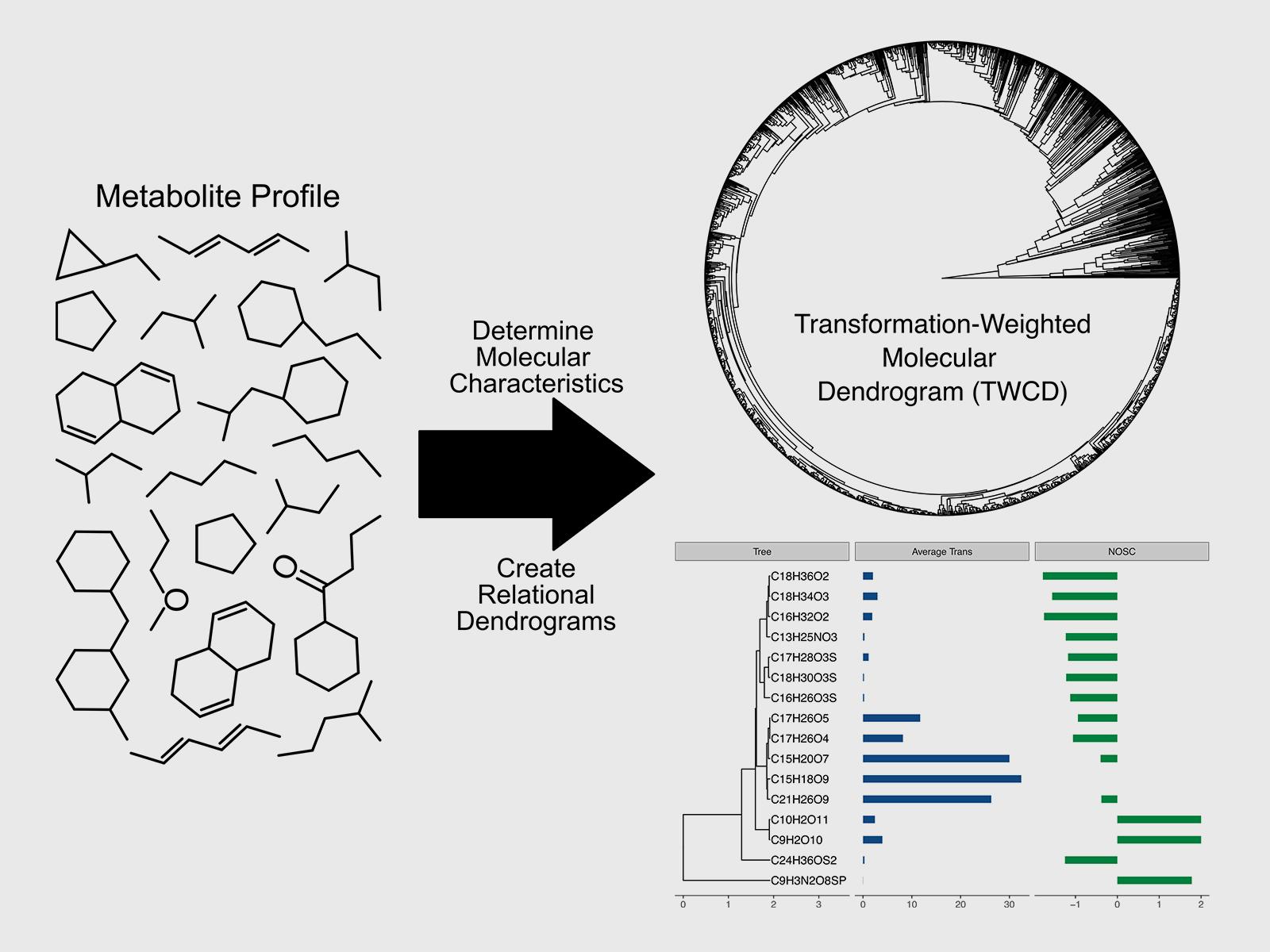 To understand processes that constrain or promote variation in environmental metabolomes, researchers have integrated concepts and tools from community ecology, such as trait-based dendrograms (right), with metabolomic data (left).

An ecological meta-community contains multiple communities of biological species distributed through space. Processes governing meta-community dynamics are often studied through an approach called null modeling. Now, researchers, led by scientists at the U.S. Department of Energy’s Pacific Northwest National Laboratory (PNNL), have shown that this approach can be extended to organic molecules fundamental to biogeochemical cycling across all ecosystems. They developed this new conceptual paradigm and created the tools to turn the concepts into a quantitative framework. To demonstrate the approach, the team further applied the methods to organic metabolites collected along a well-studied section of the Columbia River. The outcome is the foundation for a new line of scientific inquiry they call “meta-metabolome ecology.”

This approach enables researchers to track processes governing organic metabolite profiles through space and time in natural ecosystems. This is key to develop predictive, mechanistic models that link molecular properties to emergent ecosystem function from local to global scales, such as reactive transport and Earth system models. River corridors are an example of an ecosystem that can benefit from this type of analysis. They are major biogeochemical engines of the Earth system, yet challenges connecting processes and features across scales still exist. Furthermore, the science opened by this study will allow microbial taxa to be more directly coupled to the organic molecules involved with metabolic reactions that underlie biogeochemical function.

To better understand processes that constrain or promote variation in metabolomes, researchers integrated metabolite data with tools and concepts from community ecology. They used metabolite data collected from ultrahigh resolution mass spectrometric analysis of filtered river water and subsurface pore water collected from a well-studied stretch of the Columbia River. These data were generated at the Environmental Molecular Sciences Laboratory (EMSL), a DOE Office of Science user facility at PNNL.

With these data, the researchers developed several metabolite dendrograms to group molecules based on common traits, such as elemental composition, structural features, and biochemical transformations. Next, they performed ecological null modeling, a common approach used in meta-community ecology but never before applied to organic metabolite assemblages. The null models quantified processes that governed the assembly of molecules into metabolomes.

This approach provides a tool for modelers to winnow the enormously complex milieu of organic molecules down to a subset that is most important for enhancing predictive capacity. This tool is poised to be used with large-scale molecular analysis of environmental metabolomes, such as those provided by Worldwide Hydrobiogeochemical Observation Network for Dynamic River Systems (WHONDRS).