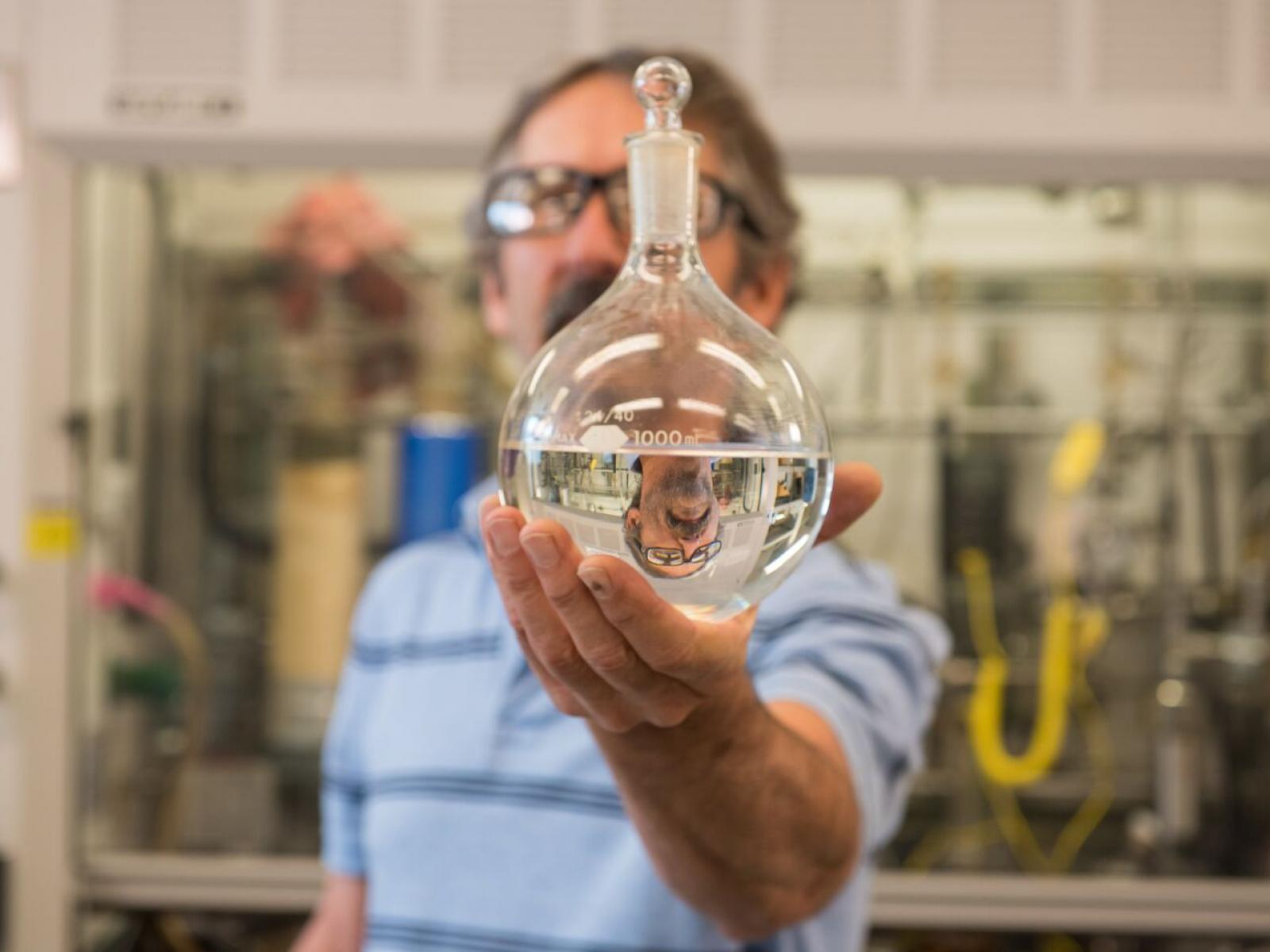 Imagine you’re on an airplane, relaxing comfortably at cruising level as you gaze out at the majestic, snow-capped mountains below. It’s time for the in-flight announcements, but there’s a surprise. “This is your captain speaking. I’m proud to tell you that you’re flying on a jet that is powered by low-carbon sustainable jet fuel. So relax and enjoy the ride.”

That vision is getting closer to reality. Through chemistry, catalysis, and engineering that started at Pacific Northwest National Laboratory and was scaled up by LanzaTech

, the aviation industry now has a way to make sustainable fuel blends that meet the jet standards and are more cost-competitive than ever.

We didn’t want to mimic existing petroleum-based fuel, but to make something better.

Researchers from government and industry have been pursuing sustainable synthetic aviation fuels for more than a decade. The challenge is that, unlike ethanol-blended fuels that are commonly available at gas stations, aviation fuels require a higher energy density to keep 200-ton jets aloft. Five non-fossil fuel, synthetic jet fuel pathway standards had been allowed for use in aircraft—in blends mixed with conventional petroleum-derived jet fuel. But researchers had been stymied by the need to make more sustainable synthetic aviation fuel with the required properties, at lower costs.

April 1, 2018 marked a dramatic leap forward in that quest. For the first time, ASTM International issued a revised standard allowing an ethanol-derived jet fuel pathway for commercial use, at up to a 50 percent blend (see news release

), based on LanzaTech and PNNL data for sustainable jet fuel produced from ethanol. The ASTM standard allowed ethanol as an approved feedstock for producing alcohol-to-jet synthetic paraffinic kerosene, or ATJ-SPK.

This opened the door to producing exceptionally high-quality sustainable jet fuel from low-cost resources. For example, LanzaTech’s proprietary technology captures industrial waste gases rich in carbon monoxide and converts them to ethanol using a microbial process operated in a continuous flow reactor. Such waste gases come from a variety of sources; for example, carbon monoxide is a chemical byproduct of steel manufacturing. Carbon monoxide can also be found in refinery operations as well as gasification of municipal solid waste.

The revised ASTM standard marked the culmination of a multi-year PNNL collaboration with industry that began with fundamental chemistry and ended with a new fuel.

“The airline industry is keenly interested in sustainable jet fuel, both for environmental and economic reasons,” said Corinne Drennan, Sector Lead for Bioenergy Technologies at PNNL. Jet fuel costs represent a significant chunk of airline operating costs — expected to be around 22 percent in 2018, according to the International Air Transport Association. In addition, aircraft contribute 3 to 5 percent of global carbon dioxide emissions. The airline industry has set goals to shrink its carbon footprint by reducing emissions and improving fuel efficiency.

The newly approved ASTM standard cleared the way for adoption of sustainable aviation fuels from ethanol. In addition to expanding fuel options for airlines, the PNNL/LanzaTech technology could give ethanol manufacturers other potential products to offer: jet and diesel fuels.

Start with the Fundamentals

From the start of this work in 2010, PNNL researchers knew what they wanted to make. “We were aiming for jet fuel from waste-derived ethanol, with the highest energy content per weight to provide the thrust needed for jet engines,” Drennan said, “and it had to remain fluid even in high-altitude temperatures that could plunge to minus 50 degrees.”

“We didn’t want to mimic existing petroleum-based fuel, but to make something better,” added PNNL’s John Holladay, who spearheaded the project and is Co-Director of The WSU-PNNL Bioproducts Institute. That meant optimizing the chemistry to prevent wax and aromatic formation. Waxes would choke the catalyst during jet fuel production. Aromatics produce soot when burned in jet engines, and ice particles that form on the soot leave atmospheric-warming contrails. The team also wanted to create a process that could make not only jet fuel, but diesel fuel—for diesel engines in ships, trains, and trucks—that remained fluid in cold temperatures.

Some in the aviation community were skeptical of such lofty goals, but PNNL was up for the challenge. Drawing on deep expertise in chemistry, and with industry collaborators alongside, the team developed a patented thermocatalytic process for converting ethanol into ATJ-SPK.

The first step of the process, dehydration, converts the ethanol into ethylene. During the second step, oligomerization, ethylene molecules are chemically combined to build the range of hydrocarbon molecules needed for aviation fuel. “Producing jet fuel from triglycerides (fats) which have 16 to 22 carbons requires cracking down to jet range carbon distributions, which range from around 8 to 16 carbons,” Holladay explained. “We took a different approach of building up 2-carbon ethylene to 8 through 16-carbon jet fuel.” That process allows researchers to efficiently optimize the number of carbons to be in the jet range. These hydrocarbons are then hydrogenated, followed by fractionation to produce ATJ-SPK with the desired properties.

Important keys to success were partnerships with Seattle-based Imperium Renewables, spearheaded by then-CEO John Plaza in 2010, and then later with LanzaTech, based in Skokie, Ill. Working with LanzaTech, PNNL demonstrated that the catalysts were stable over thousands of hours of processing. After PNNL produced 5 gallons of the desired fuel, LanzaTech scaled up the entire process to produce 4,000 gallons, with ethanol produced from steel mill waste gas and derived from grain. This fuel formed the basis for review and validation by the Federal Aviation Administration, aircraft and engine manufacturers, and, eventually, the revised ASTM standard.

LanzaTech’s proprietary technology captures waste gases and converts them to ethanol. “Recycling these gases instead of emitting them into the atmosphere reduces pollutants and other harmful emissions by up to 85 percent,” said Jennifer Holmgren, LanzaTech CEO. “Using low-cost feedstocks helps us keep the process economical, and industrial facilities get an additional revenue stream for what would otherwise be considered waste.”

, laid the groundwork for understanding the chemistry and catalysis functions.

The journey doesn't end here. With an exclusive license to PNNL's catalytic technology and support from DOE’s Bioenergy Technologies Office, LanzaTech is designing a U.S. facility that will produce millions of gallons annually of ethanol-based sustainable jet and diesel fuel. LanzaTech and PNNL are working on ways to further streamline the process to reduce costs—as well as developing the next-generation catalyst. For all involved, it continues to be a "soaring" experience.