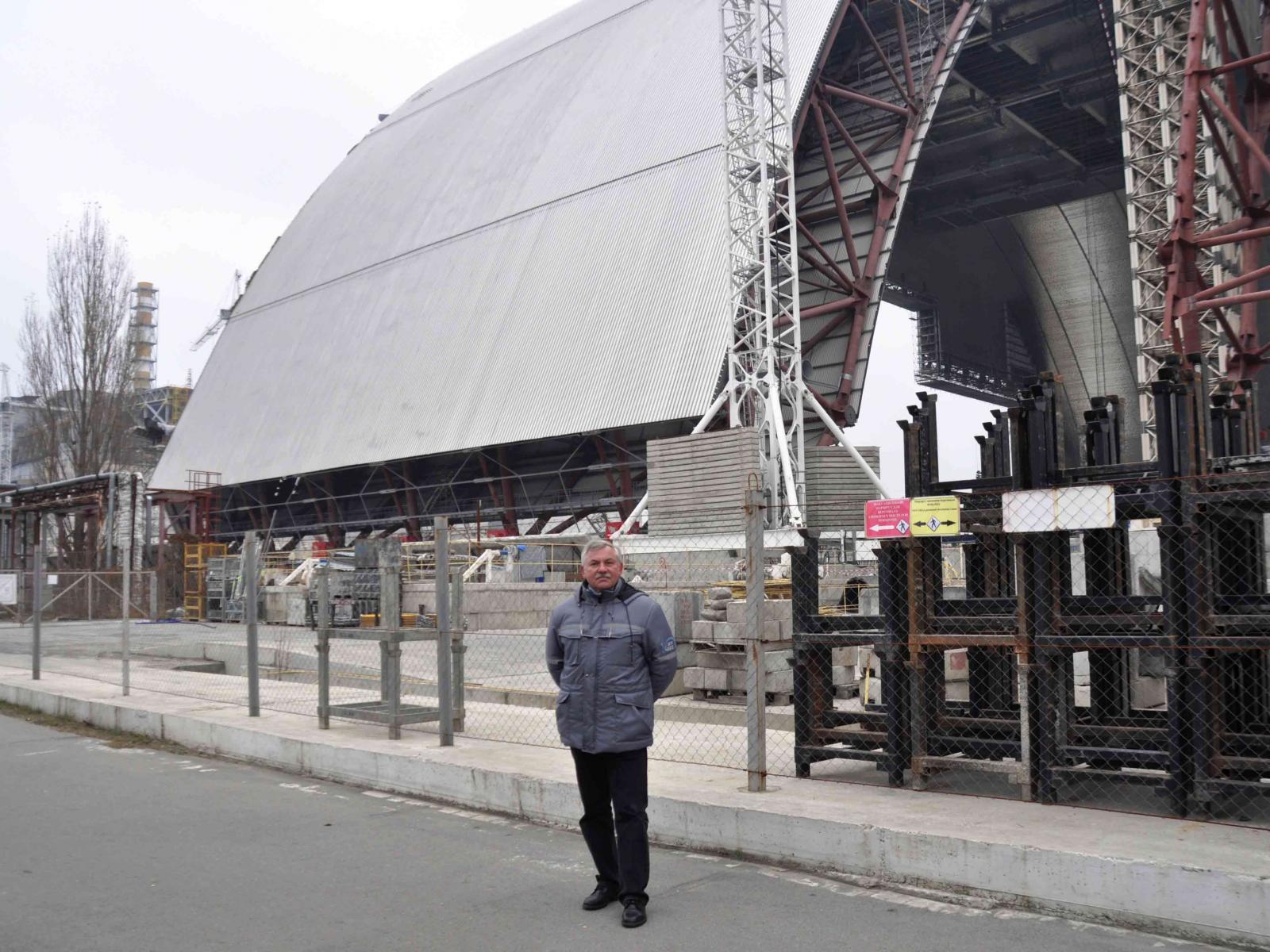 Battelle researcher Andrei Glukhov, "on loan" to Bechtel at Slavutych, stands in front of the New Safe Confinement steel structure then still under construction at the Chernobyl Nuclear Power Plant.

Today marks the 31st anniversary of the catastrophic explosion at the Chernobyl Nuclear Power Plant's Unit 4 reactor. The blast discharged 400 times the radioactivity released by the Hiroshima bomb and drove nearly 200,000 people from their homes near the plant in Ukraine.

Now, the hastily built sarcophagus used to temporarily contain what remained of the reactor's hull after the meltdown has been permanently entombed. A massive steel arch was built, and in 2016, slid over the sarcophagus where it is expected to safely and securely contain the radioactive debris for 100 years.

In the early 1990s, Battelle, operator of the Department of Energy's Pacific Northwest National Laboratory, was part of an international consortium looking at the long-term safety and containment of Unit 4 at Chernobyl. Through 2014, Battelle researchers at PNNL applied their expertise in nuclear science, safety, remediation and engineering to help Ukrainians.

Among their many contributions, researchers led the early designs for the arch steel structure called the New Safe Confinement. The effort was billed as the world's largest moveable structure — 843 feet across, 355 feet high and 492 feet in length. That's roughly the size of two Manhattan blocks and tall enough to enclose the Statue of Liberty.

Though Battelle withdrew from the project in 2014, a few Battelle researchers remained "on loan" to Bechtel at Slavutych to oversee construction and movement of the NSC to its final destination. Construction of the nearly 40,000-ton structure began in 2010, and it was delicately moved in November 2016 over the sarcophagus.

Battelle's Andrei Glukhov, who was a reactor operator at the Chernobyl Nuclear Power Plant when the catastrophe occurred, was among those who remained. Glukhov and other researchers recently returned to PNNL. But from 1994 through 2014, more than 200 employees contributed to help improve safety at the Chernobyl site. Several researchers uprooted entire families, relocating them from the Tri-Cities to Slavutych to be closer to where the solutions were needed. In addition to contributing scientific research and engineering, they introduced to Slavutych one of the U.S.'s favorite games — baseball.

Read more about our work at Chernobyl and view photos of the NSC here.