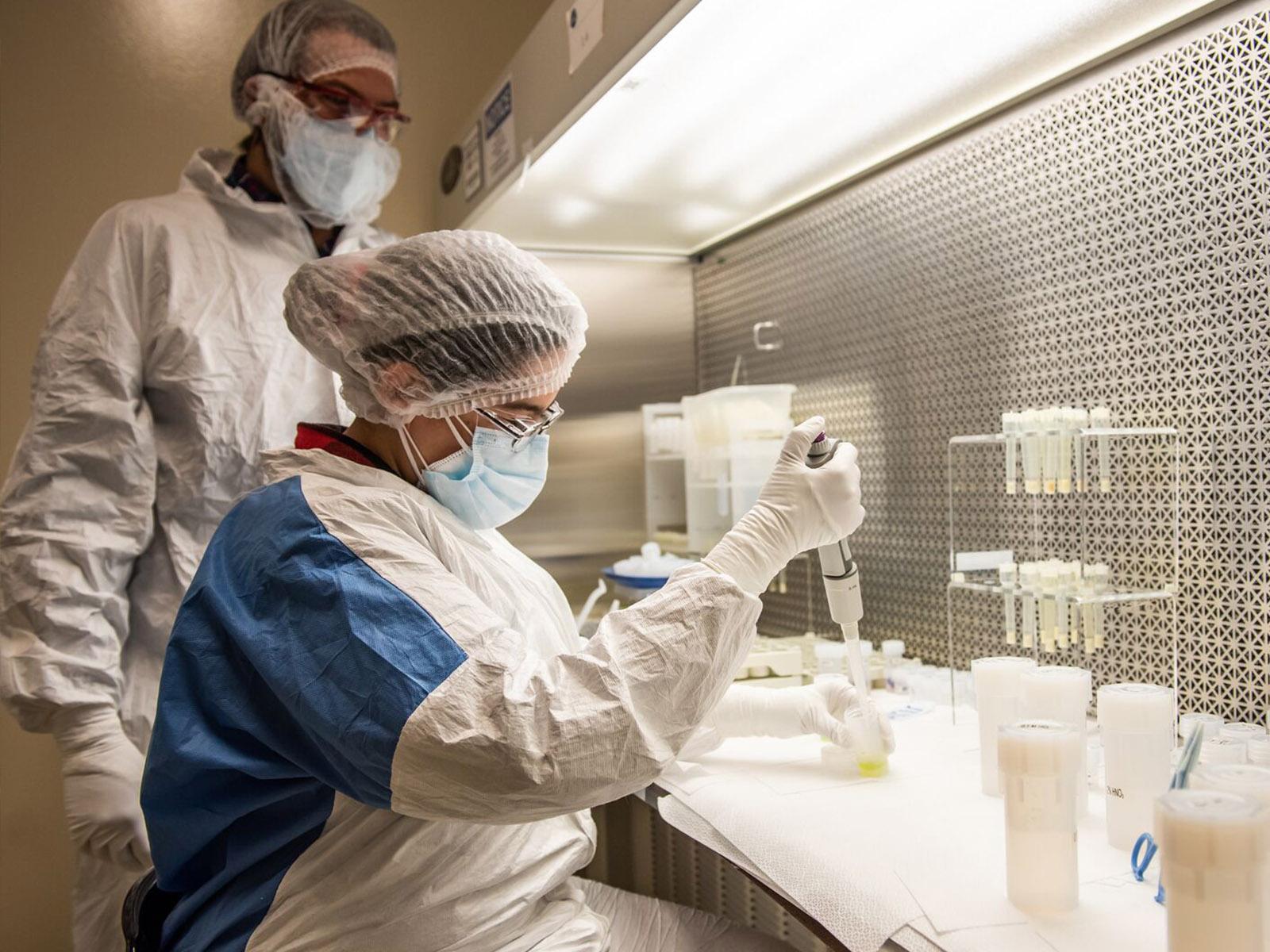 Researchers Khadouja Harouaka (front), Isaac Arnquist and their colleagues at PNNL developed a simple and convenient alternative for the measurement of ultratrace uranium and thorium that will allow the high energy and nuclear physics communities to meet the growing demand for lower thresholds of radio contaminants.

For many of us, do-it-yourself efforts typically consist of a home improvement project, a backyard makeover or a trendy craft.

At the Department of Energy’s Pacific Northwest National Laboratory, DIY projects are a bit more ambitious and involve the creation of specialized scientific instrumentation and prototypes of innovative technologies.

We also are more likely to share the fruits of our labor with industry or the research community rather than neighbors we hope to impress.

PNNL scientists and engineers often need help from their skilled crafts colleagues to turn their great ideas into reality.

When our craftspeople apply their technical capabilities in machining, welding and fabrication to create novel instruments and prototypes, the results are much more impressive than a new deck or barbeque pit.

For example, in one effort related to national security, a laboratory machinist fabricated stainless steel spheres that are being used to recreate realistic conditions in which nuclear material could be concealed by a smuggler.

Initially, the researchers wanted to conduct experiments that involved shielding radioactive materials with lead or steel, but the steel shields available to them were too bulky and heavy.

To overcome this problem, the machinist produced precision spherical shielding, tailored specifically for the researchers’ needs. By maximizing the shielding while minimizing the material needed, these spheres are enabling experiments that were previously impracticable.

The high-tech instrumentation invented by PNNL scientists to support their research often ends up in future commercial products used worldwide, broadening their impact beyond their labs.

For more than three decades, researchers at PNNL have been enhancing the performance of mass spectrometers—ultra-sensitive analytical instruments used to separate the individual components of a mixture based on their weight.

These technologies have been licensed to several instrument manufacturers who further advance the devices for commercial sale.

In this way, they bring PNNL’s innovation to the scientific community for use in many fields, including clean energy, environmental stewardship and human health.

One of the most recent developments in this area is known as SLIM, which is short for Structures for Lossless Ion Manipulation.

Put simply, SLIM does a better job separating and distinguishing the compounds in a mixture, so they can be more readily detected by mass spectrometers.

When coupled with high-resolution mass spectrometry, SLIM can analyze biological and chemical compounds as much as a thousand times faster and with greater precision than other methods.

In another effort, scientists are building on a patented method for detecting and analyzing extremely low levels of naturally occurring radiation.

While such ultratrace radiation doesn’t pose a health risk, knowing when even the tiniest amounts are present is important in the manufacture of semiconductors and sensitive electronic detection equipment.

The PNNL innovation, known as the collision cell, was developed more than 25 years ago and has been licensed to industry.

In recent years, our researchers have used it to detect radioactive thorium and uranium in gold when just a few parts per trillion are present.

This aids in the design of highly sensitive detectors using ultrapure gold that physicists hope will detect elusive particles comprising the universe.

PNNL chemists also use the collision cell approach to inform the production of the world’s purest copper (another PNNL DIY) for detectors that process samples for international nuclear nonproliferation treaty verification.

The phrase “many hands make light work” applies to both home DIY projects and the ones taking place at PNNL.

We are grateful for the creativity and ingenuity of those who do what it takes to advance scientific research and produce new knowledge. The results truly are impressive!