Solving Mysteries of How Water Works

Water is important and drives many phenomena important to biomedical and national security interests, among others. 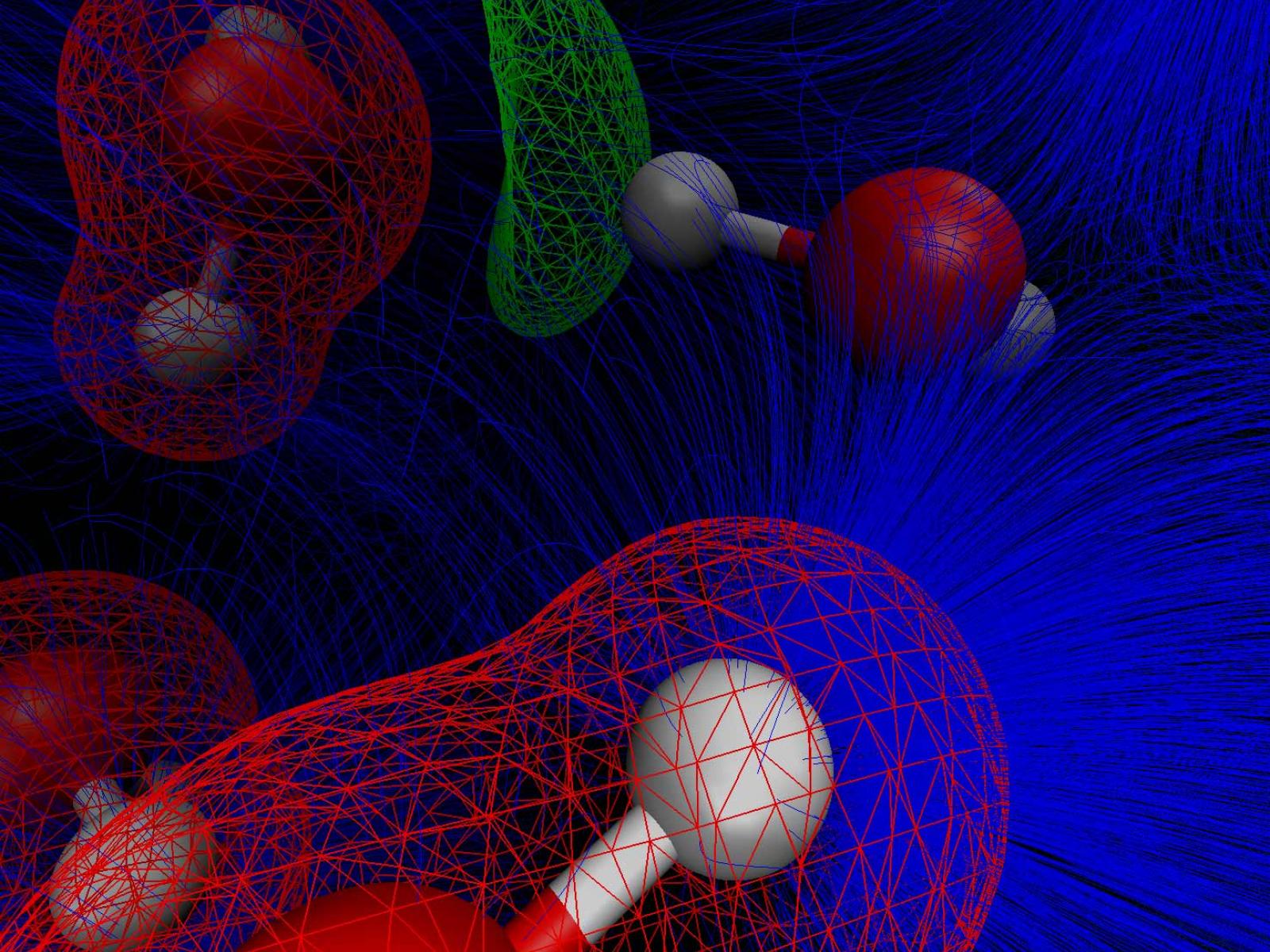 Researchers pioneered an approach to “see” how extremely intense local electric fields (blue curves) distort water’s OH vibrations. Water’s lone electron pairs (green) give rise to negative voltages relative to the positive voltages (red) due to the screened nuclei of water molecules as well as from the cesium ion. The coupling between the intense electric fields and the OH vibrations can be analyzed via these vibrational fields.

Many phenomena depend on the connectivity of hydrogen bonds. Scientists have strived to unlock mysteries about how the network of hydrogen bonds in water controls its behavior since 1806 when Theodor Grotthuss published his seminal work on electrolysis. While scientists have made immense strides since, many of these mysteries remain unsolved more than 200 years later. That may change soon thanks to a research team at Pacific Northwest National Laboratory (PNNL) and Yale University.

Those researchers pioneered an observational approach to make the assignment of hydrogen bonds in water much more definitive, providing an important lead to unraveling this mystery. Co-led by PNNL's Sotiris Xantheas and Shawn Kathmann and Yale's Mark A. Johnson, the team combined novel measurements and theory to understand vibrational fingerprints of small aqueous nanocrystals. This better understanding could lead to many breakthroughs, including in the biomedical realm and in detecting vibrational signatures of explosives and forensics of nuclear materials.

Results: The research team created synergy between new instrumentation and theory to study the vibrational response of water molecules when they are crowded close to a cesium ion in an aqueous nanocrystal containing the ion and six water molecules.

The researchers found a way to combat the smearing effect by stopping the motion at very low temperature with only a few water molecules surrounding the positively charged cesium ion. They then used specialized instruments to find the sharp colors associated with the aqueous nanocrystal.

"We found a way to isolate the response of each water molecule in the crystal so that we could accurately compute the way water is deformed according to its local environment," said Kathmann. "In essence, we created a new road map to guide the theoretical tools needed to predict molecular behavior in a wide range of different systems."

Why It Matters: In the absence of precise approaches prior to this study, researchers have had to make educated guesses. They've had to deduce the likely overall structure and connectivity of the hydrogen-bonded network in water molecules from the pattern of the atomic vibrational motions recorded in the infrared spectrum. Researchers coined these patterns "vibrational fingerprints" or "signatures" of the underlying network of hydrogen bonds. The same way that a detective can deduce clues from a fingerprint, so too can a scientist when studying the "vibrational fingerprint" to understand the connectivity of molecules. While these clues have been useful, the researchers' breakthrough allows much more precise observation and understanding of these fingerprints.

With their combined theoretical and experimental approach, the research team pushed the envelope to show how to better solve the difficult mysteries surrounding the most fundamental aspects of how water mediates chemical change. Their research brings scientists closer to unraveling the mysteries of water's hydrogen-bonded network and learning how the electric fields they experience can be connected to the vibrational spectra. "Our findings give rise to concept of vibrational fields," said Kathmann. "For example, researchers can now address the extremely important question of how and ion's electric fields migrate through and distort water's vibrational network."

Water is especially mysterious and challenging for physical chemists. It is so flexible that one or two water molecules often "step out" of their role as a passive solvent and become part of the chemical act. That is a real challenge for theory to handle, and this study opens new leads to using theory and experiment to interpret and predict observations.

The researchers are using their approach to gain quantitative insights into the vibrational signatures of water molecules in proximity to solute ions.

Isotopomer-selective spectra of a single intact H2O molecule in the Cs+(D2O)5H2O isotopologue: Going beyond pattern recognition

Solving Mysteries of How Water Works