New technique offers quick, precise data on the metals in ores and other solids 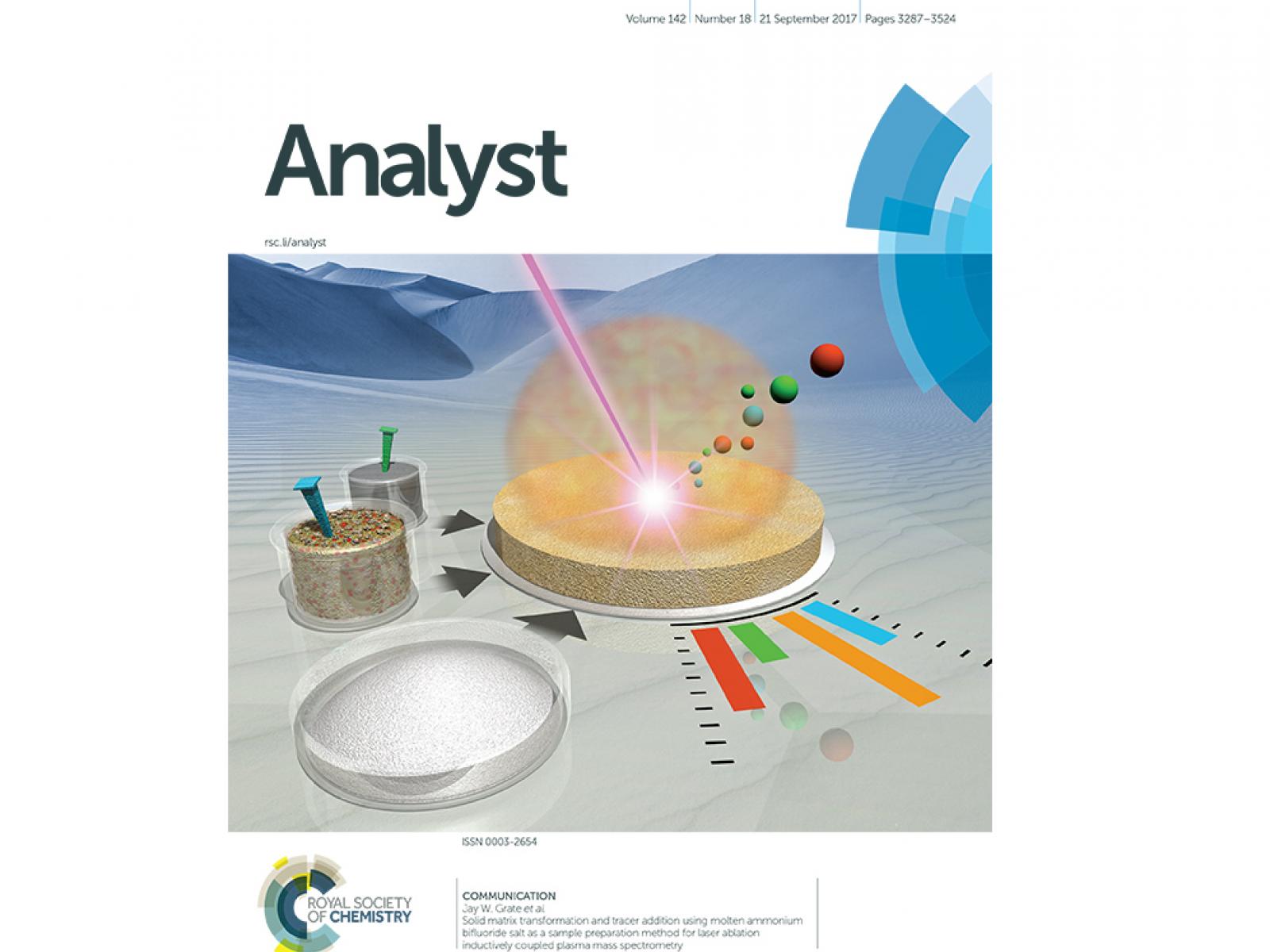 The cover of Analyst features artwork describing the research. The art was designed by Jay Grate and Mike Perkins, both at PNNL.

Imagine a big glass jar full of candy, a colorful mixture of jelly beans. You want to know how rare your favorite green ones are. Specifically, you want to know the number of green ones relative to the number of grams of the whole mixture. If you just pull out a handful from the jar and meticulously count the number of green jelly beans, you don't know what fraction of the total candy you removed! You don't know the total weight of candy, sans jar, or the weight your removed for bean counting. Chemists analyzing the trace metal atoms in a solid sample face just this problem. Using a technique known as laser ablation mass spectrometry, they can count atoms removed from the solid sample, but they don't know how much of the sample was removed and measured, or how it relates to the total mass of the sample.

Dr. Jay Grate at Pacific Northwest National Laboratory (PNNL) and Dr. Rick Russo at Lawrence Berkeley National Laboratory led a team in breaking through the problem. They used an innovative molten salt technique to process a sample and add tracer atoms. In the candy jar analogy, they've found a way to add uniquely colored beans (the tracer beans) in a precise ratio to the original sample, and to evenly mix these new beans throughout. The ratio of the new beans to the green jelly beans, determined by counting a sample, helps in understanding how the number of green beans counted relates to the total mixture, provided the new (tracer) beans are evenly mixed.

Why It Matters: How do metal atoms distribute in the environment? Are the ores in a mine valuable? Are there nuclear materials in a sample? The metal atom or isotopic content of samples is essential to geologists understanding earth processes, miners assaying ores, and security experts looking for nuclear materials such as uranium. All these experts require precise information and they want it fast. Usually, these analyses require lengthy processes using hot liquid acids. Laser ablation mass spectrometry (LA/MS) can sample solids directly without dissolution. However, LA/MS has suffered from difficulties getting quantitative information on the amount of metal atoms in a gram of sample.

"This work breaks traditional barriers in laser ablation based analysis techniques," said Grate, a research chemist with experience in materials analysis. "The precision improved by over two orders of magnitude!"

Summary: The team's LA/MS technique offers fast, precise analysis. The starring feature of the technique is the transformation of a solid sample of unknown composition into a new solid sample containing a known amount of tracer, using a molten salt technique with ammonium bifluoride.

Scientists combined sample solid, tracer, and ammonium bifluoride powder in small, screw top fluoropolymer vial. They heated these powder-containing vials in an oven to 230 degrees Celsius, where the ammonium bifluoride is molten but not boiling. The bonds of the original sample mineral matrix are chemically broken to free the existing atoms, and, in addition, the tracer atoms become evenly distributed in the molten material.

When cooled, the transformed solid is suitable for fast direct sampling and analysis by LA/MS.

Developing the technique was a synergistic effort. Grate and Russo had been talking about combining Grate's experience in nuclear analysis and sample preparation with Russo's experience in laser ablation. When the Department of Energy issued the challenge to do something original to break through existing limitations in LA/MS, Grate and Russo joined Dr. David Koppenaal, PNNL, in proposing a new approach.

The team is now extending the work to multi-element analysis with more tracers and faster-femtosecond-lasers. By enabling quantification, LA/MS may play a much larger role in sample analysis with the advantage of fast analysis times.