Scientists Pinpoint Cause of Harmful Dendrites and Whiskers in Lithium Batteries 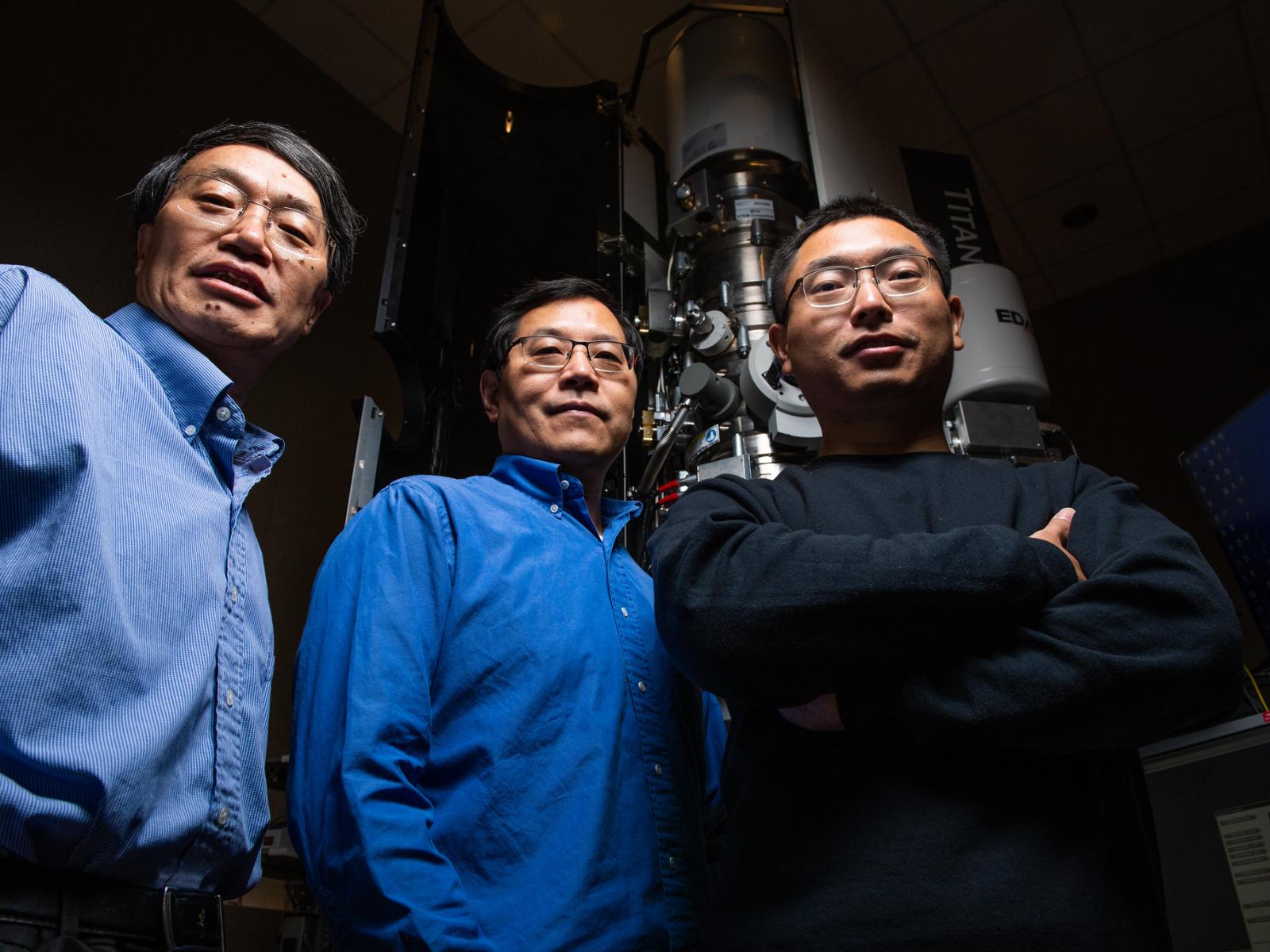 PNNL scientists Chongmin Wang, Wu Xu, and Yang He with the specially modified environmental transmission electron microscope they used to capture images and video of growing whiskers inside a lithium battery.

RICHLAND, Wash. – Scientists have uncovered a root cause of the growth of needle-like structures—known as dendrites and whiskers—that plague lithium batteries, sometimes causing a short circuit, failure, or even a fire.

The team, led by Chongmin Wang at the Department of Energy’s Pacific Northwest National Laboratory, has shown that the presence of certain compounds in the electrolyte—the liquid material that makes a battery’s critical chemistry possible—prompts the growth of dendrites and whiskers. The team hopes the discovery will lead to new ways to prevent their growth by manipulating the battery’s ingredients. The results were published online Oct. 14 in Nature Nanotechnology.

Dendrites are tiny, rigid tree-like structures that can grow inside a lithium battery; their needle-like projections are called whiskers. Both cause tremendous harm; notably, they can pierce a structure known as the separator inside a battery, much like a weed can poke through a concrete patio or a paved road. They also increase unwanted reactions between the electrolyte and the lithium, speeding up battery failure. Dendrites and whiskers are holding back the widespread use of lithium metal batteries, which have higher energy density than their commonly used lithium-ion counterparts.

The PNNL team found that the origin of whiskers in a lithium metal battery lies in a structure known as the “SEI” or solid-electrolyte interphase, a film where the solid lithium surface of the anode meets the liquid electrolyte. Further, the scientists pinpointed a culprit in the growth process: ethylene carbonate, an indispensable solvent added to electrolyte to enhance battery performance.

It turns out that ethylene carbonate leaves the battery vulnerable to damage.

The team’s findings include videos that show the step-by-step growth of a whisker inside a nanosized lithium metal battery specially designed for the study.

A dendrite begins when lithium ions start to clump, or “nucleate,” on the surface of the anode, forming a particle that signifies the birth of a dendrite. The structure grows slowly as more and more lithium atoms glom on, growing the same way that a stalagmite grows from the floor of a cave. The team found that the energy dynamics on the surface of the SEI push more lithium ions into the slowly growing column. Then, suddenly, a whisker shoots forth.

It wasn’t easy for the team to capture the action. To do so, scientists integrated an atomic force microscope (AFM) and an environmental transmission electron microscope (ETEM), a highly prized instrument that allows scientists to study an operating battery under real conditions.

The team used the AFM to measure the tiny force of the whisker as it grew. Much like a physician measures a patient’s hand strength by asking the patient to push upward against the doctor’s outstretched hands, the PNNL team measured the force of the growing whisker by pushing down on its tip with the cantilever of the AFM and measuring the force the dendrite exerted during its growth.

The recipe for electrolyte

The team found that the level of ethylene carbonate directly correlates with dendrite and whisker growth. The more of the material the team put in the electrolyte, the more the whiskers grew. The scientists experimented with the electrolyte mix, changing ingredients in an effort to reduce dendrites. Some changes, such as the addition of cyclohexanone, prevented the growth of dendrites and whiskers.

“We don’t want to simply suppress the growth of dendrites; we want to get to the root cause and eliminate them,” said Wang, a corresponding author of the paper along with Wu Xu. “We drew upon the expertise of our colleagues who have expertise in electrochemistry. My hope is that our findings will spur the community to look at this problem in new ways. Clearly, more research is needed.”

Understanding what causes whiskers to start and grow will lead to new ideas for eliminating them or at least controlling them to minimize damage, added first author Yang He. He and the team tracked how whiskers respond to an obstacle, either buckling, yielding, kinking, or stopping. A greater understanding could help clear the path for the broad use of lithium metal batteries in electric cars, laptops, mobile phones, and other areas.

Authors of the paper, from PNNL and EMSL, include Wang, Xu, and He, as well as Xiaodi Ren, Yaobin Xu, Mark Engelhard, Xiaolin Li, Jie Xiao, Jun Liu, and Ji-Guang (Jason) Zhang. The work was funded by DOE’s Office of Energy Efficiency and Renewable Energy’s Vehicle Technologies Office. The work was made possible thanks to the unique combination of capabilities available at EMSL, the Environmental Molecular Sciences Laboratory, a DOE Office of Science user facility located at PNNL.

The Motivation for Sustainable Aviation Fuels