From “Remotely Possible” to “Possible Remotely”

Researchers get creative to complete work despite travel restrictions 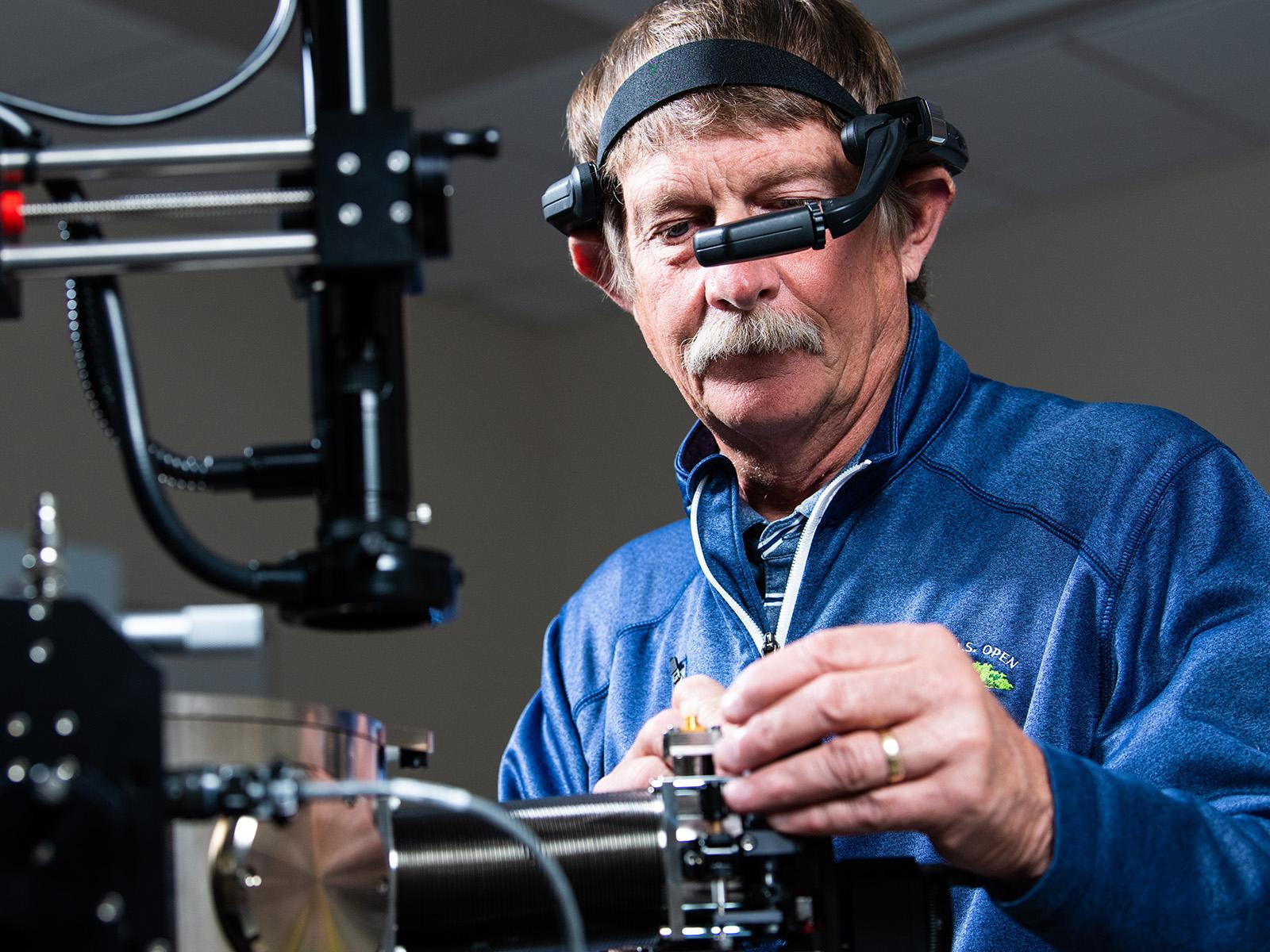 Researcher Bruce Arey uses the headset to “virtually” show other researchers how to operate a new piece of equipment.

As COVID-19 was limiting in-person contact, halting travel, and creating additional barriers, researchers at Pacific Northwest National Laboratory (PNNL) were working to find solutions on how they could still get work done while establishing new safety protocols and learning to navigate this new environment.

Earlier this year, PNNL researchers were scheduled to test robotics equipment for a sponsor with a partner from Canada. Before COVID, the Canadian team would have simply flown to Richland, stayed the week, and performed the tests before returning home.

That wasn’t the case. The team faced many hurdles they hadn’t seen before.

“The vendor couldn’t travel to PNNL and the space where the work was going to occur had a personnel limit of three” said Nick Cramer, software engineer.

So how could a company in Canada operate a robot on the PNNL-Richland campus, with minimal staff in the room?

“We figured out a solution using a number of cameras around the room, where the vendor could remotely view the room. They would be able to control their robot over the internet and despite being in a different country, still be able to perform a week-long series of tests,” said Cramer.

At the end of the week, the team realized they would need a few more days to complete tests. But through remote testing, they were able to take the weekend off and finish on Monday. The alternative resulted in the cost savings of booking more hotel nights and extending their stay in Richland.

Both remote and on-site participants in the testing considered the experience a success.

“The contractor in Canada was so pleased with the outcome they are considering doing more of this type of activity as a standard operating procedure with other clients,” said Dave Gillen, software engineer. “This allows them to be able to work from the comfort of their own offices and not have to travel to remote locations.”

Before the team in Canada could perform their tests remotely, a plan was needed.

“We proposed a variety of cameras that might be part of the solution, before settling on a final set-up,” said Cramer.

Cramer even went so far as to mock a test facility in his living room using his children's LEGO® bricks to build examples of the angles a remote operator would be able to see using different cameras in the laboratory. These included top-down contextual views and up-close detailed views. Using these examples, the team decided on the final solution, a set-up they’re calling a “local+remote” augmented working configuration.

In total, six cameras were used, including one head worn camera called a RealWear headset, two cameras on mini tripods that could be repositioned by the person inside the room, two fixed mounted wide view cameras, and an iPad camera that could be moved around and clamped in different locations or handheld. The headset also includes a noise-cancelling microphone that makes it easy to hear the presenter, even in the loudest of rooms.

“The local+remote augmented working configuration the team created in our laboratory using stationary webcams and a headset exceeded our expectations,” said Kayte Denslow, physicist and project manager. “It allowed the remote staff to operate the robot from their home base with all the viewing perspectives necessary to walk our test lead, Dan Howe, through the hands-on aspects of testing the robot on our tank mock-up, and some unexpected mechanical repairs of the robot.”

This project for the U.S. Department of Energy Office of Environmental Management and contractor Washington River Protection Solutions is developing the robot—equipped with an ultrasonic sensor—to inspect the bottom of underground tanks that store nuclear waste at the Hanford Site and detect flaws, such as corrosion pits. The virtual meeting with partners Eddyfi Technologies and Guidedwave allowed the tank integrity project to stay on schedule.

With the local+remote system a success during the testing, the team was next tasked with setting up a similar demonstration for Under Secretary for Science Paul Dabbar who was visiting the campus to learn more about PNNL’s capabilities and impact.

“We had the opportunity to show Under Secretary Dabbar up close, if you could stand inside a tank in the future, here’s what one of the inspection systems would be doing,” said Denslow. “He got to see first-hand the impossible things we’re asking the system to do in a Dixie cup-sized cross section.”

For the demonstration, the Canadian vendor operated the robot and leveraged the entire test setup, including all the cameras. They conducted a full demo as if performing all the tests again.

“This was very different for me, and honestly I didn’t think I’d prefer it in the end,” said Denslow. “Before, I’d have much rather had all the experts in the same room working together. But after seeing how this worked so well, even with the team in another country, I think it might have changed the way we can do these projects in the future.”

These types of tests and demonstrations are just the beginning for this technology at PNNL.

“We might all be at home right now, but we’re making it work with what we have,” said Cramer. “This technology has proved itself as a success and there is an incredible demand from around PNNL for it to assist with getting work done.”

“COVID-19 put us in an interesting situation that we didn’t expect to be in from a workforce standpoint,” said Andy Cowell, Director of Research Computing. “But in some cases, we’re finding better, more effective ways to get work done than we ever would have imagined.”

The headsets solved several problems and created lots of momentum at PNNL around virtual tours for sponsors, collaborators, as well as new hires. These virtual tours allow staff to show locations around the campus, including laboratories and facilities, while still answering questions in real-time. The headsets also have proved irreplaceable for training, and not just on the PNNL campus.

“We’re able to send headsets to other locations and then train the personnel on-site using them,” said Cowell, “allowing us to see exactly what they see, and walk them through the right steps.”

PNNL is now examining what the future of work at a national laboratory might look like in this new environment—everything from office set-ups, to laboratory and meeting space designs. And the available technologies are at the core of this effort.

“The opportunities really are endless, and it is going to be very exciting to see how they unfold,” said Cowell.

PNNL Honored with Above and Beyond Award