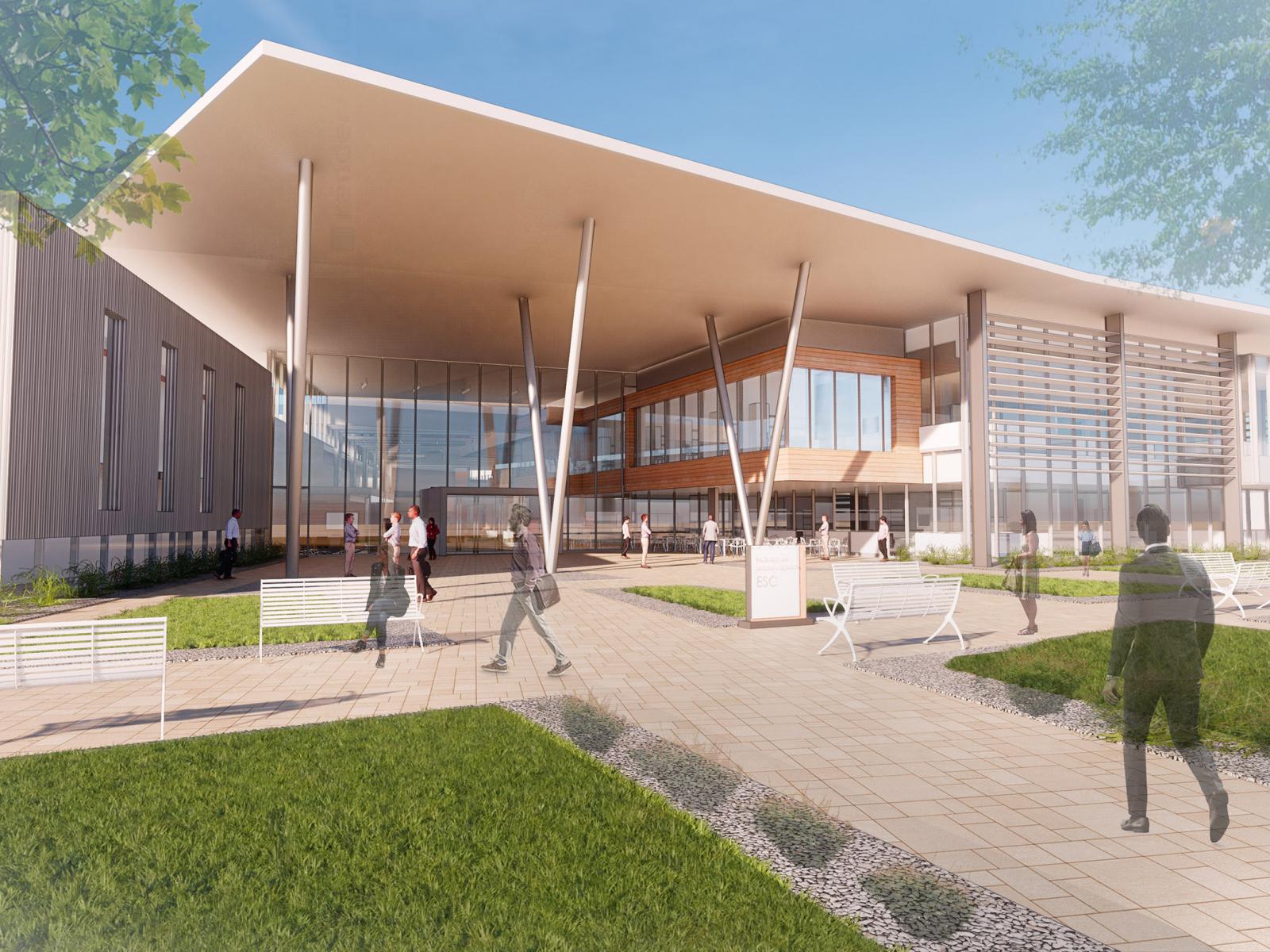 This architectural rendering provides a preview of the new, $90-million energy sciences research building being constructed at PNNL. The basic science advances taking place in the new facility will push the frontiers of chemistry and propel innovations in energy and materials.

Although the ceremonial turning of dirt with national and state officials was postponed due to COVID-19 precautions, construction is underway on a new, 140,000-square-foot research and collaboration facility at the Department of Energy's Pacific Northwest National Laboratory.

Especially in these times of uncertainty, it is exciting to see a vision begin to come to fruition.

This $90 million federal investment serves as a concrete example of the shared priorities of PNNL, DOE and our great state of Washington.

It will allow PNNL to co-locate its cutting-edge capabilities in chemistry, materials and computing to accelerate research in energy sciences. The new facility is designed to facilitate collaboration and idea sharing, as well as to be a showcase for scientific discovery.

It will bring together staff at PNNL with colleagues from industry, other national laboratories and academia, including Washington State University and the University of Washington.

Scheduled to open next year, the new facility will house world-renowned staff and state-of-the-art instrumentation to propel fundamental research in furtherance of sustainable energy solutions.

For example, it will advance the frontiers of energy-efficient chemical processes and new materials for energy production and transportation.

As such, the facility aligns with Washington state's energy, environmental and economic goals. Recognizing this, the state committed $8 million to purchase advanced imaging instrumentation for the facility, expecting to attract industry to leverage this intellectual hub.

One area of exciting research focuses on sustainable and energy-efficient ammonia production. Ammonia is crucial to fertilizers that help feed the world. But the process to convert hydrogen and nitrogen into ammonia is energy intensive, using one to two percent of the world's entire energy output.

It also contributes to carbon dioxide in the atmosphere — more than two metric tons of CO2 emissions produced for every metric ton of ammonia produced globally.

Last summer, PNNL researchers and collaborators identified the molecular structure of an enzyme that, in nature, acts as a catalyst to break down nitrogen and produce ammonia.

They are gaining a better understanding of this enzyme called nitrogenase and its function. The team focused on identifying how the specific molecular structure in nitrogenase breaks apart the strong chemical bond of nitrogen gas — a critical step in converting nitrogen to ammonia.

Using computer simulations and analytic techniques, they studied how the structure's electrons and protons were arranged.

Specifically, scientists set out to learn how nitrogenase can store four extra electrons in a very small cluster of atoms, when typically, electrons repel each other.

In a significant discovery, PNNL scientists identified the only structure that matched results from experimental data. Researchers will use this insight to design synthetic catalysts that mimic how nitrogenase functions but on an industrial scale, generating ammonia for large-scale fertilizer production while using less energy and reducing emissions.

Conducting fundamental research that could eventually revolutionize fertilizer production is just one example of the kind of transformative developments we expect to see in the new facility.

Others could result in reduced vehicle emissions or the ability to turn agricultural waste into fuels and other products efficiently and economically.

PNNL scientists working in this facility will be studying how materials like semiconductors that are used in electronics form, atom by atom. As they learn how to control materials' properties, they can improve their efficiency and effectiveness. New characterization tools in the building will further this goal, revealing the fundamental principles of reactions that underpin new energy storage solutions.

With the support of DOE, Washington State's Clean Energy Fund and Battelle, this facility will provide the scientific foundation for game-changing innovations. It is an exciting new chapter in PNNL's long history of distinguished chemistry research in support of national needs.