The Path to Renewable Fuel Just Got Easier 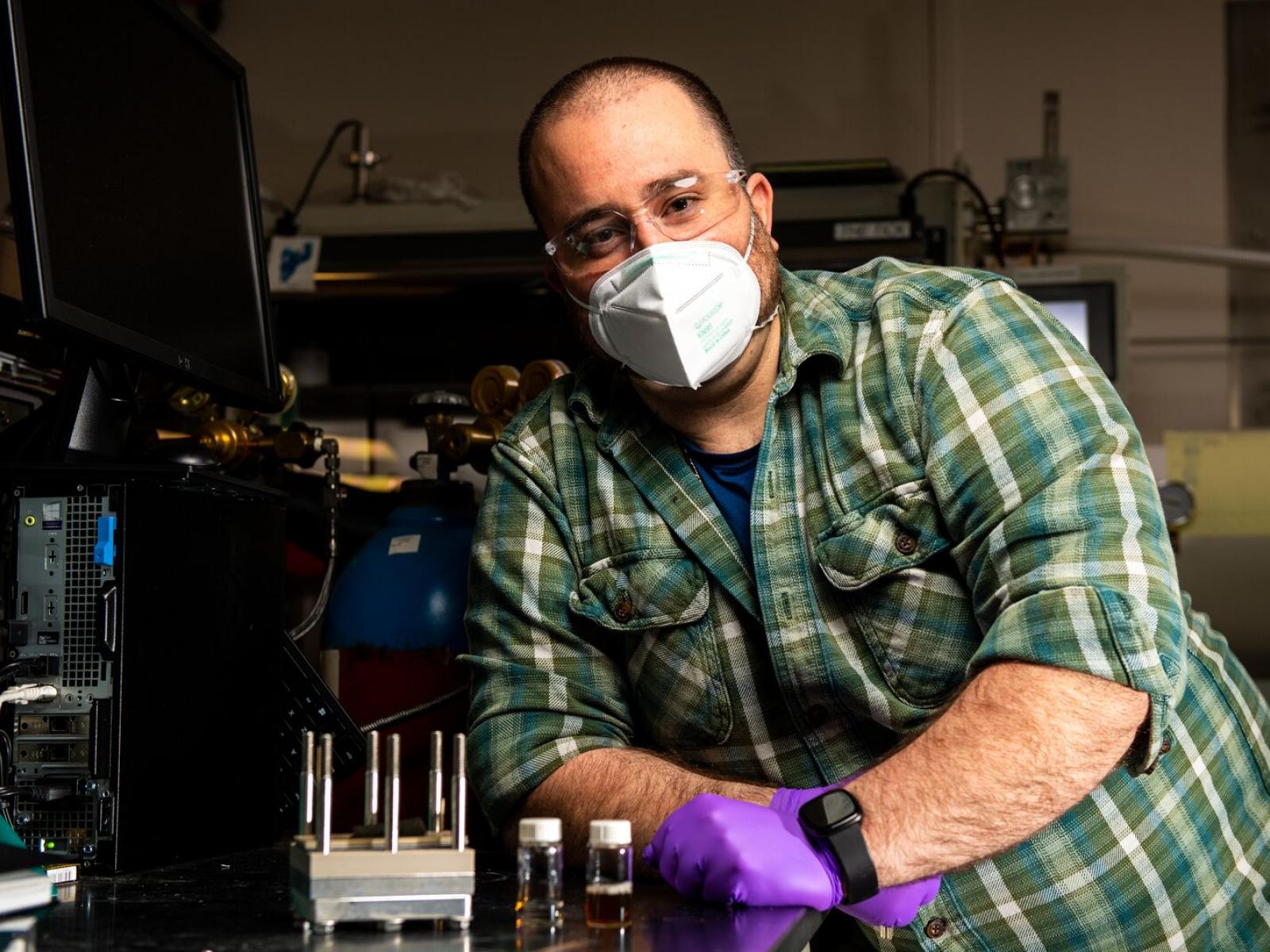 RICHLAND, Wash.—The holy grail of bio-fuel researchers is to develop a self-sustaining process that converts waste from sewage, food crops, algae and other renewable carbon sources into fuels, while keeping waste carbon out of our atmosphere and water. Much progress has been made in converting such waste to useful fuel but completing the cycle using clean energy has proved a tough nut to crack.

Now, a research team at the Department of Energy’s Pacific Northwest National Laboratory has developed a system that does just that. PNNL’s electrocatalytic oxidation fuel recovery system simultaneously turns what has been considered unrecoverable, diluted “waste” carbon into valuable chemicals, while simultaneously generating useful hydrogen. Being powered by renewables makes the process carbon-neutral or even potentially carbon-negative.

The key to making it all work is an elegantly designed catalyst that combines billions of infinitesimally small metal particles and an electric current to speed up the energy conversion at room temperature and pressure.

“The currently used methods of treating biocrude requires high-pressure hydrogen, which is usually generated from natural gas,” said Juan A. Lopez-Ruiz, a PNNL chemical engineer and project lead. “Our system can generate that hydrogen itself while simultaneously treating the wastewater at near atmospheric conditions using excess renewable electricity, making it inexpensive to operate and potentially carbon neutral.”

In laboratory experiments, the research team has tested the system using a sample of wastewater from an industrial-scale biomass conversion process for almost 200 hours of continuous operation without losing any efficiency in the process. The only limitation was that the research team ran out of their wastewater sample.

“It’s a hungry system,” Lopez-Ruiz said. “The reaction rate of the process is proportional to how much waste carbon you are trying to convert. It could run indefinitely if you had wastewater to keep cycling through it.”

The patent-pending system solves several problems that have plagued efforts to make biomass an economically viable source of renewable energy, according to Lopez-Ruiz.

“We know how to turn biomass into fuel,” Lopez-Ruiz said. “But we still struggle to make the process energy efficient, economical and environmentally sustainable—especially for small, distributed scales. This system runs on electricity, which can come from renewable sources. And it generates its own heat and fuel to keep it running. It has the potential to complete the energy recovery cycle.”

“As the electric grid starts to shift its energy sources toward integrating more renewables,” he added, “it makes more and more sense to rely on electricity for our energy needs. We developed a process that uses electricity to power conversion of carbon compounds in wastewater into useful products, while removing impurities like nitrogen and sulfur compounds.”

One very effective process for conversion of wet waste carbon to fuel is called hydrothermal liquefaction (HTL). This process, in essence, compresses the natural, fossil fuel-production time, converting wet biomass into an energy-dense biocrude oil in hours instead of millennia. But the process is incomplete in the sense that the wastewater that is produced as part of the process needs further treatment to obtain added value from what would otherwise be a liability.

“We realized that same (electro)chemical reaction that removed the organic molecules from wastewater could be also used to directly upgrade the biocrude at room temperature and atmospheric pressure as well,” Lopez-Ruiz said.

This is where the new PNNL process comes into play. Unrefined biocrude and wastewater can be fed into the system directly from an HTL output stream or other wet waste. The PNNL process consists of what’s called a flow cell where the wastewater and biocrude flows through the cell and encounters a charged environment created by an electric current. The cell itself is divided in half by a membrane.

The positively charged half, called an anode, contains a thin titanium foil coated with nanoparticles of ruthenium oxide. Here, the waste stream undergoes a catalytic conversion, with biocrude being converted to useful oils and paraffin. Simultaneously, water soluble contaminants, such as oxygen and nitrogen-containing compounds, undergo a chemical conversion that turns them into nitrogen and oxygen gasses—normal components of the atmosphere. The wastewater that emerges from the system, with contaminants removed, can then be fed back into the HTL process.

On the negatively charged half of the flow cell, called a cathode, a different reaction takes place that can either hydrogenate organic molecules (such as the ones in treated biocrude) or generate hydrogen gas—an emerging energy source that the flow cell developers see as a potential source of fuel.

“We see the hydrogen byproduct generated by the process as a net plus. When collected and fed into the system as a fuel, it could keep the system running with fewer energy inputs, potentially making it more economical and carbon-neutral than current biomass conversion operations,” said Lopez-Ruiz.

The speed of chemical conversion provides an added benefit to the system.

“We did a comparison of rates—that is how fast we can remove oxygen from organic molecules with our system as opposed to the energy-intensive thermal removal,” Lopez-Ruiz said. “We obtained more than 100 times higher conversion rates with the electrochemical system at atmospheric conditions than with the thermal system at intermediate hydrogen pressures and temperatures.” These findings were published in the Journal of Applied Catalysis B: Environmental in November 2020.

One major drawback of many commercial technologies is their reliance of rare Earth metals, often the so-called platinum group metals. The global supply chain for these elements relies heavily on dated extraction processes that are energy intensive, consume a lot of water and create toxic waste. Imports account for 100 percent of the United States’ supply for 14 of 35 critical materials and more than half of 17 others, according to the Department of Energy, which has made domestic supply a top priority.

The system addresses this problem by incorporating a unique method of depositing nanoparticles of the metals responsible for the chemical conversion. These particles have a large surface area, which require less metal to do its work. “We found that using metal nanoparticles as opposed metal thin films and foils reduced the metal content and improved the electrochemical performance” said Lopez-Ruiz. These findings were recently published in the Journal of Applied Catalysis B: Environmental. The novel catalyst requires 1,000 times less precious metal, in this case ruthenium, than is commonly needed for similar processes. Specifically, the laboratory-scale flow reactor uses an electrode with about 5 to 15 milligrams of ruthenium, compared with about 10 grams of platinum for a comparable reactor.

About those useless carbon compounds

The research team has also shown that the PNNL process can handle processing of small water-soluble carbon compounds—byproducts found in the water waste stream of current HTL processes—as well as many other industrial processes. There are about a dozen of these devilishly difficult to process small, carbon compounds in the wastewater streams at low concentrations. Until now, there has been no cost-effective technology to handle them. These short-chain carbon compounds, like propanoic acid and butanoic acid, undergo transformation to fuels, such as ethane, propane, hexane and hydrogen, during the newly developed process.

A preliminary cost analysis showed the electricity cost required to run the system can be fully offset by running the operation at low voltage, using the propane or butane to generate heat and selling the excess hydrogen generated. These findings were published in the July 2020 issue of the Journal of Applied Electrochemistry.

Battelle, which manages and operates PNNL for the federal government, has applied for a United States patent for the electrochemical process. CogniTek Management Systems (CogniTek), a global company that brings energy products and technology solutions to market, has licensed the technology from PNNL. CogniTek will be integrating the PNNL wastewater treatment technology into patented biomass processing systems that CogniTek and its strategic partners are developing and commercializing. Their goal is the production of biofuels, such as biodiesel and bio jet fuels. In addition to the commercialization agreement, PNNL and CogniTek will collaborate to scale up the wastewater treatment reactor from laboratory scale to demonstration scale.

“We at CogniTek are excited by the opportunity to extend the PNNL technology, in combination with our core patents and patent pending decarbonization technology,” said CogniTek Chief Executive Officer Michael Gurin.

The technology, dubbed Clean Sustainable Electrochemical Treatment—or CleanSET, is available for license by other companies or municipalities interested in developing it for industry-specific uses in municipal wastewater treatment plants, dairy farms, breweries, chemical manufacturers and food and beverage producers. To learn more about how this technology works, or to schedule a meeting with a technology commercialization manager, visit PNNL’s Available Technologies site.

In addition to Lopez-Ruiz, the PNNL research team included Yang Qiu, Evan Andrews, Oliver Gutiérrez and Jamie Holladay. The research was supported by the Department of Energy’s Advanced Manufacturing Office and the Chemical Transformation Initiative, a Laboratory Directed Research and Development Program at PNNL. Portions of the research were conducted as part of a Cooperative Research and Development Agreement with Southern California Gas Company.